At PMQs, Theresa May made a jaw-dropping claim about what her party's done for Britain - Canary 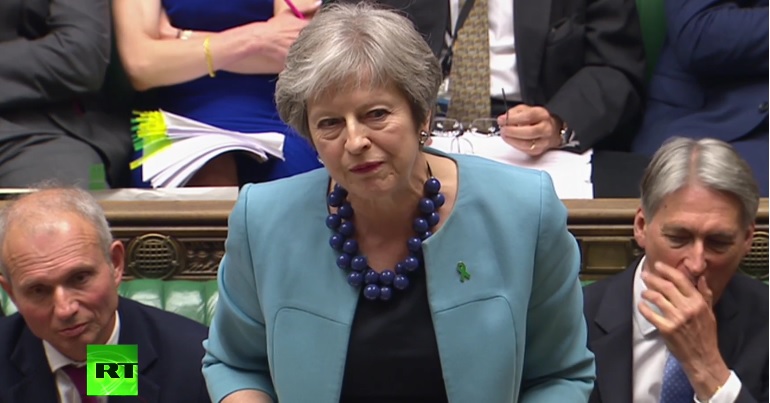 Theresa May made a jaw-dropping claim about what her party has done for Britain at Prime Minister’s Questions (PMQs) on 16 May. The PM actually said that people “have more money in their pockets under the Conservatives”.

She’s right, of course, if you’re talking about the richest Britons. But for the vast majority of people living under the Conservative government, May’s outrageous claim is a giant slap in the face.

Following her regular tussle with Jeremy Corbyn at PMQs, North Warwickshire MP Craig Tracey asked a question. He praised the recent news that real wages have risen by 2.9% in the first quarter of 2018. And he asked May to join him “in welcoming this good news”. May responded:

I’m very happy to join with him in welcoming the good economic news… and with the news that real wages are up, as my honourable friend says, that means more money in people’s pockets under the Conservatives.

As the Office for National Statistics (ONS) explained, in the most recent quarter wages “increased by 0.4% excluding bonuses, but were unchanged including bonuses, compared with a year earlier”.

But the ONS also points out that Britons are still worse off than they were in 2008. As the Guardian reports, average total earnings for people (including bonuses) are now £489 per week before tax and other deductions. It was £522 before the 2008 financial crash.

Meanwhile, the Trades Union Congress (TUC) has calculated that the UK’s wage recovery will be the slowest in 200 years. It claims wages won’t be at pre-crisis levels until 2025, by which point workers will, on average, have lost out on £18,500 of earnings.

Furthermore, the UK’s wage growth from the crisis onwards has been one of the lowest in Europe.

So there isn’t “more money” in workers’ pockets. At least not in comparison to 2008. There also certainly isn’t “more money” in the pockets of all the disabled people living with the government’s cuts to benefits. Nor is there “more money” for our nurses, doctors, teachers and public sector staff who spent seven years with a pay freeze until very recently.

So no, May, there’s not “more money” in most people’s pockets under the Conservatives. Despite your contrived celebrations with Tracey about it at PMQs.