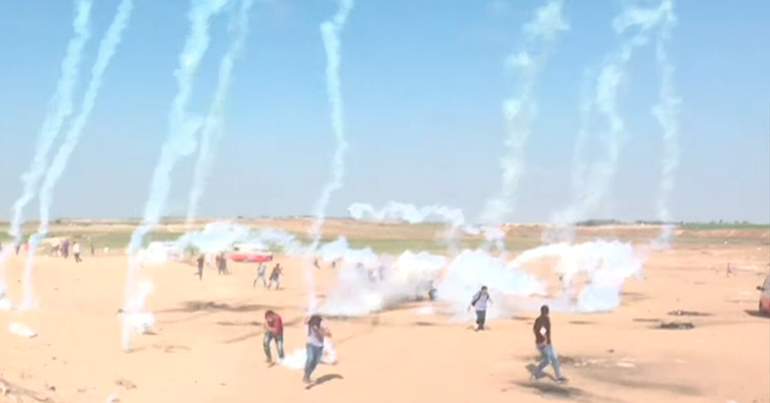 One American Jew has written a letter to his local synagogue. And it’s a bold response to Israel’s massacre of Palestinian protesters on 14 May.

Howard Horowitz is a former president of the WESPAC Foundation, a peace and justice network in New York. And after the massacre, he said in a letter to his synagogue’s Israel Action Committee:

In this, the “Gaza Spring,” the IDF [Israel Defense Forces] has killed more than 80 Palestinians and maimed and wounded 10,000 more. Not one Israeli casualty, not a scratch. No guns on the “other” side just burning tires and “deadly” kites. Why do I have images of David and Goliath (except this time Goliath is winning)?

Why do I have images of people who after 70 years of exile, want to go home, to return to their homes? Are the Palestinians, in the face of the Israeli Goliath, the new Jews?

… We as Jews who remember the Holocaust and the victimization of the Jewish people stand in solidarity with the new Jews. If we don’t stand up and say no, we are complicit in murder, plain and simple.

And he explained Gaza’s recent protests quite simply, saying:

The Palestinians in Gaza are trying to break the Israeli siege.

‘We must acknowledge history’

As 15 May was Nakba Day (the commemoration of when “tens of thousands were expelled from their homes in 1948”), Horowitz also insisted in his letter:

Now we must acknowledge and atone for the expulsion, oppression and killing of Palestinians for the past 70 years. We must, as Jews, teach the Nakba in our religious and Hebrew schools, understanding that Nakba denial is no different than Holocaust denial. We would not make peace with those who deny the Holocaust and [make] teaching its memory illegal.

One Gazan protester recently summarised the link between the 1948 dispossession and the passion of today’s protesters:

The Palestinians, they have nothing to lose. They took our land. They took everything. We live in the hell in Gaza.

The “images of David and Goliath” that Horowitz mentioned are poignant. Because there isn’t a balanced war between two sides in Israel and Palestine. There’s a lopsided conflict between an occupying colonial power and an occupied people – one with tanks and state-of-the-art weapons, the other with stones and other low-tech tools.

It's a David & Goliath scenario. The Palestinian stonethrowers are no match for the Israeli ammunition. It's like watching a rich guy beat up a guy in a wheelchair or something. It's really hard to watch. @netanyahu @POTUS @nikkihaley @IvankaTrump https://t.co/qpevxYflAp

With whom do we stand?

Although we were never “David” against the Palestinians, that’s how we pretended to be.

And as +972 Magazine has insisted:

This week, Israel has killed at least 60 protesting Palestinians. And there hasn’t been a single Israeli casualty.

The choice now is ours. Do we stand with David, or with Goliath?

– Find out more about the Palestinian Solidarity Campaign and the Boycott, Divestment, Sanctions (BDS) movement.