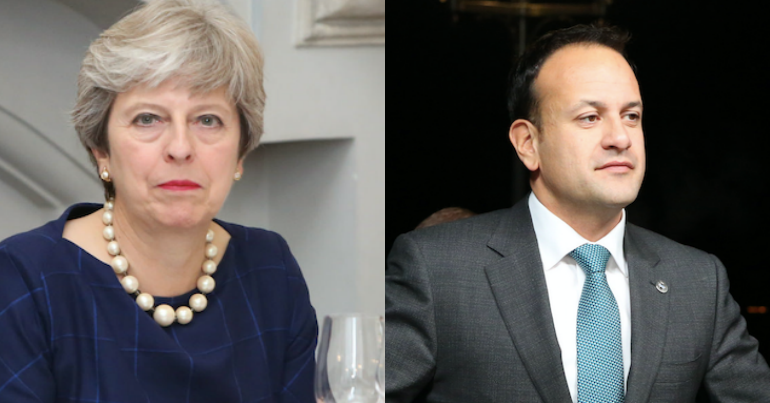 Varadkar has reiterated the EU’s position that there can be no withdrawal agreement without a so-called “backstop” solution to the Irish border problem. But political commentators have accused UK prime minister Theresa May’s government of “magical thinking” over its proposed solutions.

We need to have that backstop because that gives us the assurance that there will be no hard border on our island. So we stand by our position that there can be no withdrawal agreement without that backstop. If the UK wants to put forward alternatives… we’re willing to examine that. But we need to see it written down in black and white and know that it’s workable and legally operable. And we’ve yet to see anything that remotely approaches that.

And there’s the key point – “we’ve yet to see anything that remotely approaches that”. At this point in the negotiations, that revelation is truly shocking.

The UK government has refused to consider a backstop solution because it would involve Northern Ireland remaining inside the customs union. If Theresa May’s government doesn’t come up with an alternative proposal that satisfies the EU and Ireland, there will be no Brexit deal. As Varadkar said, the Conservatives haven’t produced “anything that remotely approaches” a solution. And the consequences of failing to agree a deal would likely be disastrous for the UK, including lost jobs and a rise in food prices.

If Varadkar’s assertion wasn’t bad enough, Theresa May has had to deny that the government has agreed to remain in the customs union after reports to the contrary. If true, though, it would mean she has U-turned on her previous pledge to take the UK out of the customs union.

May’s denial might simply be an attempt to stop an angry backlash from pro-Brexit Conservative MPs. But with no alternative solution in sight over the Irish border, remaining in the customs union for longer seems to be the only viable outcome.

From Varadkar’s comments, it’s clear that the British government’s Brexit strategy is worse than was thought. It is also evident that a solution to the Irish border problem is in the interests of every person in Britain, as well as Ireland.

With yet more reports that the cabinet cannot agree on how to proceed over Brexit, Britain seems increasingly to be in the hands of a small group of ministers with very different views, themselves largely immune to the consequences of a no-deal Brexit.