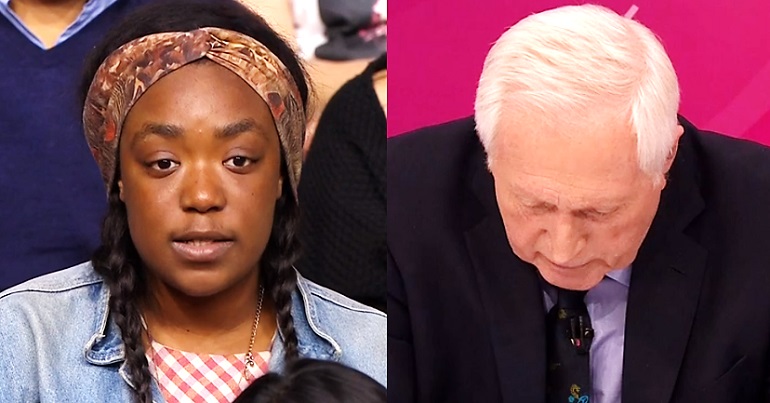 On Thursday 17 May, BBC Question Time came to Kensington. One of the main topics was the Grenfell Tower fire. But instead of the panellists leading the debate, an audience member summed up the tragedy in just four words.

The Question Time panel on 17 May consisted of: Dominic Raab, Conservative minister of state for housing; Diane Abbott, shadow home secretary; Bernard Hogan-Howe, former Met police commissioner; Camilla Cavendish, David Cameron’s former policy chief; and Guardian columnist Aditya Chakrabortty. Each gave their own interpretation of the events that led to the Grenfell Tower fire. But none of them came close to putting it in the way the audience member did.

The young woman, who appeared to be directly affected by the fire, agreed with Chakrabortty – who cited John McDonnell’s claim that the deaths which resulted from the blaze were “social murder”. She said:

It was just murder.

She reminded us of the blog by a resident that repeatedly warned that a tragedy in the tower block was waiting to happen. A blog which no one listened to until it was too late.

After pausing to compose herself, she then said she feels like:

72 people died as a result of the fire which swept through the Grenfell Tower block on 14 June 2017. But police are refusing to add the last victim to the list, officially stating that the death toll is 71. Maria Del Pilar Burton, 74, lived with long-term health complications. She was rescued from the 19th floor but died on 29 January after spending over seven months in hospital.

“One of the worst days of my life”

The young woman in the Question Time audience continued:

All this deregulation has culminated into…

She then paused briefly, before continuing:

one of the worst days of my life, and many people here too.

As BBC News reported, the cladding on the block failed to meet the necessary fire safety standards back in 2014. But no action was taken. Across the country, cladding on 294 buildings has now failed government flammability tests.

It was just murder. Sorry. But it is.

Little else needed to be said on the Grenfell Tower tragedy after this. So host David Dimbleby moved the debate on. Sadly for those affected by this act of “social murder”, moving on may not be so easy.