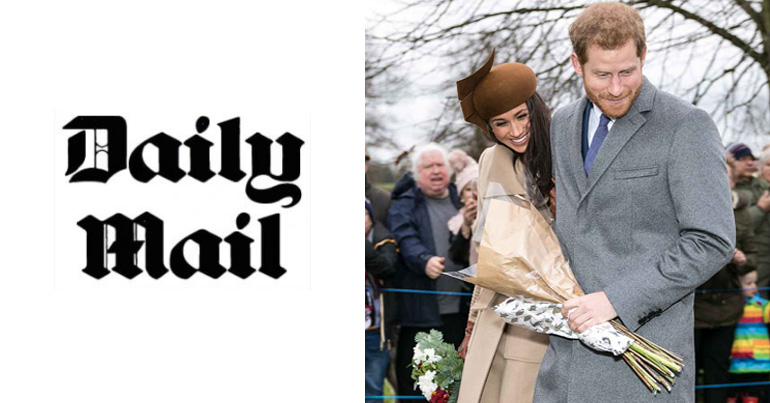 The Daily Mail can’t leave the royal wedding alone. But a column published on 17 May highlights how twisted the parasitic relationship between mainstream media and the UK establishment really is. The article is a masterpiece of hypocrisy.

“Why did no one google her family?”

This wedding is like the gross lovechild of Simon Cowell and Rupert Murdoch. Celebrity meets royal. Rags to riches. Every twisted cliché of a celebrity-obsessed media colliding on one ‘special’ day. And it masks the stench of a corrupt and rotten establishment.

The ‘paper’ is owned by Jonathan Harmsworth, 4th Viscount Rothermere. The clue’s right there in the name. With an estimated £1bn in wealth, he’s also an alleged tax avoider. The Guardian called editor Paul Dacre possibly “the most dangerous man in Britain”, who makes sure the Mail remains the “UK’s most fanatical anti-liberal voice”. Endless Mail front pages spew out vitriol about migrants, poor people, women… anyone who doesn’t ‘fit’ an outmoded and elitist image of ‘middle England’.

So a royal wedding should be the perfect vehicle for its elitist views. But not this time.

This wedding includes commoners. Even worse, it includes (whisper) foreigners. And the bride describes herself as “half black and half white”.

No wonder the Mail is rattled.

So rattled in fact that Sarah Vine’s Mail column poses “10 key questions” about the wedding. Starting with “How did the Palace get it so horribly wrong?”, she goes on to ask:

Why did no one google her family?

“Only themselves to blame”

It’s 2018, and Vine is outraged. Because had anyone bothered to google Markle’s family, the elites would have been spared:

whether there is a single grown-up in charge at Kensington Palace.

Clearly Vine is a little bit pissed off with the palace, because she also says:

I know her [Markle’s] parents are separated, and not on the best of terms. But it’s not as though the Royal Family is unfamiliar with that scenario, or dysfunctional relationships in general.

According to Vine, Harry and Meghan have “only have themselves to blame if the whole world is watching now”.

And right there is the Mail at peak hypocrisy.

Many of us don’t want to watch. As homeless numbers soar, as people die on our streets, as poverty and food bank use rockets, the vast cost of this wedding is a total insult.

However, this wedding is different. As the BBC noted, “the palace’s near-monopoly on information has been broken”. Protocol has wobbled and the royals’ “closely-controlled media operation has at times seemed to be unravelling”. And the Mail’s sister paper is partly to blame. The Guardian reports:

The issue came to a head after the Mail on Sunday’s exposé of Meghan’s father for apparently staging photographs, despite pleas from the royal family’s press office for the media to leave the family alone.

Perhaps the Mail is pissed off by the non-traditional aspects of what should be a full-scale pomp and glory festival. But it will still pump front-page profit from this wedding tirelessly, even if there’s another more sinister narrative running inside.

Shame the Mail couldn’t ask something useful. Like where can Windsor’s homeless people sleep during the wedding?

But as we know, it’s incredibly spiteful. And its spite is fuelled by sheer hypocrisy. Much like the whole concept of a lavish royal wedding in austerity-ravaged Britain.

– To show solidarity for homeless people across the UK who have had their sleeping bags and possessions removed for the wedding, there’s a Royal Sleepover planned on 18 May. And on the day of the wedding, there are also several peaceful demonstrations planned.