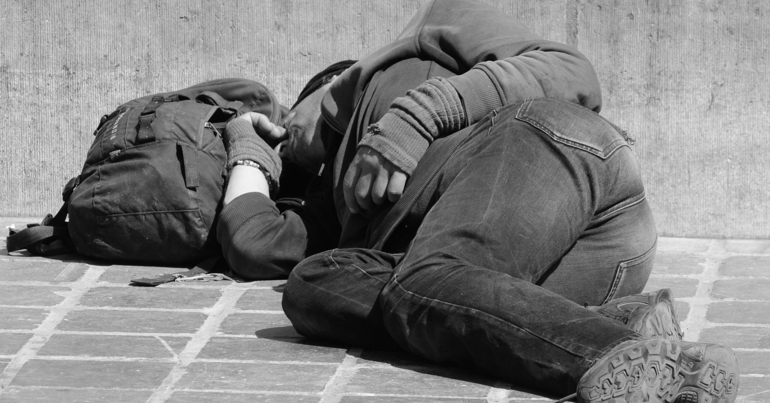 A study by The Guardian found that the number of homeless people dying on the streets or in temporary accommodation has more than doubled over the last five years. And this shocking statistic provides yet more evidence of the growing homeless crisis in the UK.

“Failure of this Tory Government”

With people found dead in supermarket car parks, church graveyards and crowded hostels, the number of deaths has risen year on year, from 31 in 2013 to 70 in 2017. At least 230 people have died over that period.

These figures can only provide an estimate of the number of deaths on the streets. Since 2010, the number of people sleeping rough in the UK has risen 169%. A government snapshot estimated [pdf, p3] that there were 4,751 rough sleepers in the UK last autumn. But homeless charities have said these figures fail to reflect actual levels of rough sleeping.

The Guardian explained that, in 2017, there had been “an average of more than one death a week” and that these figures:

are likely to be a substantial underestimate, as no part of the UK government records homeless death statistics at a national level, and local authorities are not required to count rough sleeper deaths.

As MP Laura Pidcock said, these figures only “scratch the surface”:

At least 230 homeless people have died in the streets over the last 5 years & the number has more than doubled since 2013: from 31 four years ago, to 70 last year. And we know, deep down, that those figures only scratch the surface of this awful situation: https://t.co/vQhdxBMCGp

Jeremy Corbyn was openly critical of “this Tory government”, and was clear where blame lies:

A deeply sad consequence of the failure of this Tory Government.

We're the fifth richest country in the world and we have the resources to house people, yet our Government chooses to maintain a broken system that only works for the wealthy elite.https://t.co/RwpTmSjpRp

And David Lammy, MP for Tottenham, also explained that these deaths are not ‘accidental’:

Why are people dying on the streets of the sixth richest country in the world? Austerity is a political choice. This is a direct result of 40% cuts to council budgets, slashing supported housing, homelessness service and failure to tackle housing crisis. https://t.co/VoZovgpP3M

“A stain on our national conscience”

As The Canary previously reported, homelessness has reached “dramatic proportions” in the UK. Too many homeless people ‘vanish’ onto the streets, into doorways, into phone boxes. During a brutal winter, too many homeless people died. By 2020, over 1 million households risk becoming homeless, “because of rising rents, benefit freezes and a lack of social housing”.

Homeless charities have also responded to the latest statistics:

‘This is a devastating reminder that rough sleeping is beyond dangerous – it’s deadly, and it’s claiming more and more lives each year.’ @matthew_downie on today’s news that homeless deaths in the UK have more than doubled in 5 years:https://t.co/RAtRfGmq7O

These shocking figures should be a stain on our national conscience and a bitter reminder of the dangers of sleeping rough: https://t.co/Gn5hTKXuwl

Experts have put the rise down to a rapidly increasing homeless population, rising rents, welfare cuts and lack of social housing, and have called for the government to take urgent action to address the root causes of poverty.

Some think there is only one way to end this crisis:

If you care about people, please #StopVotingTory.https://t.co/iPUcPvr4UE

The death of one person on the streets is a tragedy. When this many die, the government has blood on its hands and must be held to account.

– Call Streetlink if you see a homeless person who needs support.

– Support Help the Homeless, which gives grants to homeless charities across the UK.