A Palestinian artist filmed a music video on Gaza's front line. It's a must-watch. - Canary 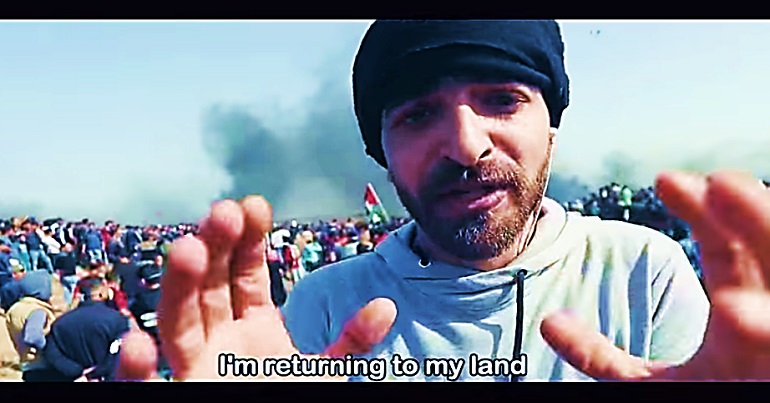 Just days after at least 17 Palestinian people died and over 1,000 were injured in protests on the Gaza-Israel border, an artist made a music video right on the front line of the occupation.

As The Canary previously reported, on Friday 30 March thousands of Palestinians began peacefully camping on the Israeli-Gaza border. It is part of the ‘Great Return March’, leading up to the 70th anniversary of the Nakba (Arabic for ‘catastrophe’). The Nakba acknowledges the displacement of Palestinians after the founding of the Israeli state. Protesters intend to stay on the border until 15 May. But on the same day as the border protests began, Israeli forces fired live ammunition into the crowds, killing at least 17 people.

The UN condemned the massacre, saying:

We remind Israel of its obligations to ensure that excessive force is not employed against protestors and that in the context of a military occupation, as is the case in Gaza, the unjustified and unlawful recourse to firearms by law enforcement resulting in death may amount to a wilful killing, a grave breach of the Fourth Geneva Convention.

Then, on 6 April, Yasser Murtaja – a journalist who was wearing a protective jacket labelled ‘press’ – was shot by Israeli forces. He later died along with eight other people, including a child.

‘Our land called. And we answered the call.’

In response, Palestinian rapper Ibrahim Ghunaim – better known as MC Gaza – decided to film the video to a grime track right on the front line of the protest. He dedicated the video to his “beloved friend and Martyr journalist” Murtaja.

In the track, MC Gaza speaks of the Great Return March. He says:

And we answered the call.

We didn’t fear the sniper’s shots

With the smoke of the burning tyres

Whether they go along with me or you

I’m returning to my land.

Grime on the front line of Gaza

The video is a stunning piece of work. Combining drone footage and traditional filming methods, MC Gaza appears to have shot the video in the midst of the protest. This makes it all the more powerful, as nothing appears staged in any way – giving the viewer a real sense of the precariousness of the situation for people taking part in the march.

MC Gaza mixes singing-laced rap with, at times, an edgier cut to his voice. It works to good effect, accompanied with the customary synthesised, swooping bass line and electronics that grime is known for.

In the UK, many grime artists like Potent Whisper use their music to convey political and social messages to good effect. But in taking the music to the front line of an ongoing, unequal conflict, MC Gaza has taken the genre to the next level. And he has produced a fitting tribute to his fallen comrade in the process.