A local Labour Party is spreading lies about the Greens. Who needs the Tories? - Canary 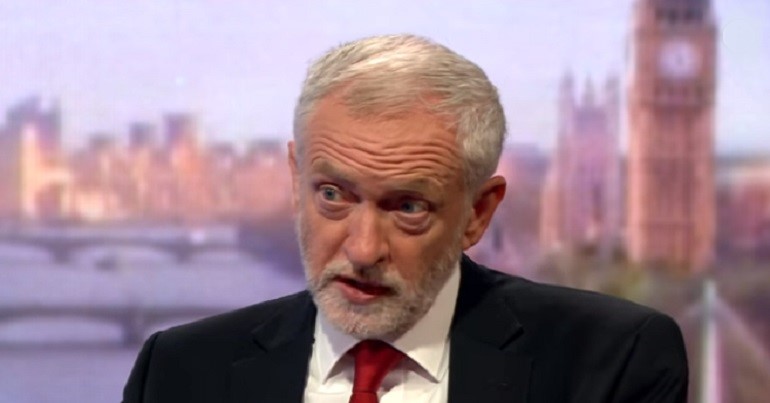 A local Labour Party has been accused by the Greens of spreading “lies” about the party and its co-leader Jonathan Bartley. Sadly, the weight of evidence indicates it has – which is probably not the look Jeremy Corbyn is after in the run-up to the local elections.

All three Constituency Labour Parties [CLPs in Lambeth] backed candidates other than Jeremy Corbyn in the two Leadership contests. Lambeth Labour was so out of touch in 2015 that all three CLP’s actually threw their influential support behind… Liz Kendall.

But its campaigning ahead of the local elections in May appears to have taken a dark twist – something that would seem more at home in the Conservative Party.

Their claim is based on an interview Bartley gave on BBC Daily Politics:

Presumably this is a different Green party co-leader called Jonathan Bartley? Perhaps you might want to delete and apologise? https://t.co/Pv3EMt8mnv

Here he is in his own words. Presumably he has conveniently changed his views now he wants people to vote for him! https://t.co/Pv3EMt8mnv

But the interview says something different. Host Andrew Neil put it to Bartley that:

Most residents do want to see regular bin collections. They don’t want them to be scrapped. Why are they wrong?

I don’t think they are necessarily wrong. I think it’s the wrong approach, though, if we’re going to tackle the crisis in recycling that we’re facing.

What Bartley was saying was that councils should consider alternate weekly collections of non-recyclable and recyclable refuse. Something other councils do. He believes this would encourage people to recycle more. That’s completely different from “scrapping weekly bin collections”, as Lambeth Labour claimed he said.

So now, claim number two, that “locally Lambeth Greens have sided with the Conservatives: backing their pro-cuts budget”:

Which to believe: Labour's letter to voters in #Streatham claiming Green Party's @Scott4Streatham voted for Conservatives' pro-cuts budget – or the council minutes showing he voted against? pic.twitter.com/XEygidIAbl

Claim number two. Debunked. But the Green’s claims about Lambeth Labour’s behaviour are nothing new.

A history of ‘claims’

On 22 March, Lambeth Labour claimed that it was “fake news” that a Green Party councillor originally put forward a motion in 2009 for the council to be a Living Wage employer, not the Labour Party. It also said:

We're used to Green party #fakenews by now – but this is pretty special even by their standards. Lambeth has been a London Living Wage employer since 2012. There was no Green councillor in Lambeth until 2014! https://t.co/LeISnPDzuA

Unfortunately for Lambeth Labour, council records show [pdf, p8] that a former Green Party councillor, Rebecca Thackray, did indeed table a motion for Lambeth council to become a Living Wage employer in 2009 – which also nullifies Lambeth Labour’s claim that there was “no Green councillor in Lambeth until 2014!”

But you’d think Lambeth Labour would remember Thackray, as their campaign literature from 2010 said that her support for Green Party decriminalisation of drugs would turn Lambeth into “South London’s main drugs supermarket”: 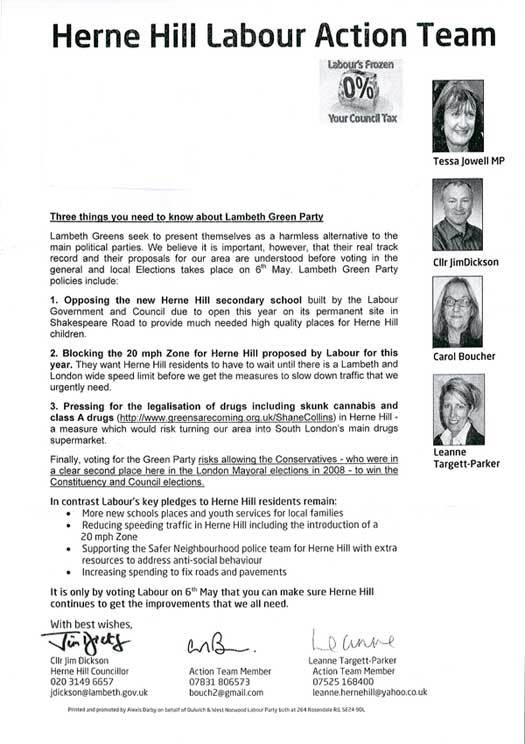 The Canary repeatedly asked Lambeth Labour for comment. We offered it the opportunity to respond to the accusations that its claims about the Green Party and its members were lies. But we had received no response at the time of publication.

Who needs the Tories?

I’m deeply saddened by the lies Labour have tried to spread about the Green Party in Lambeth this year. While no one goes into politics expecting an easy ride from the other parties, Lambeth Labour have led a particularly callous and misleading campaign in the run up to this year’s local elections.

We are committed to pursuing a politics which focuses on the people we serve and the very real issues they face, rather than scoring cheap points by spreading misinformation.

Lambeth is almost a one-party state council and Labour’s behaviour just underlines the need to have non-Labour voices on the council to hold them to account and to keep them honest.

On 3 May the people of Lambeth will have the final say over the type of politics they want in their borough. We hope they will reject our current wasteful, unaccountable one-party state and instead choose the politics of accountability, hope and community, and vote for the Green Party.

In 2015, Corbyn called for Labour to bring “real values” back into politics. But it seems Lambeth Labour has failed to replicate this notion in any sense.