Homelessness has reached 'dramatic proportions' in the UK, says new report - The Canary 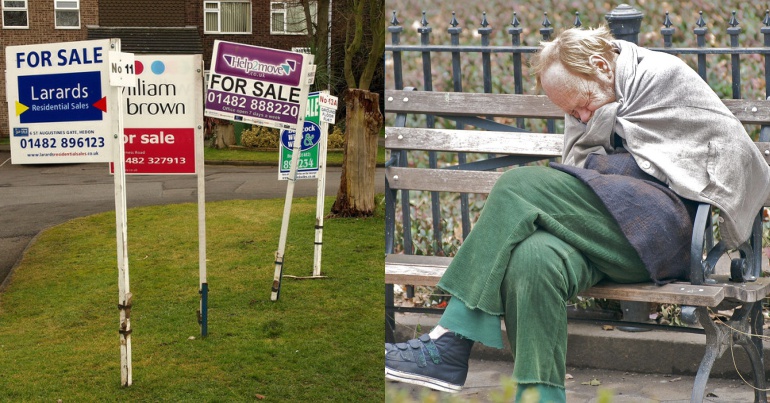 Homelessness has reached “dramatic proportions” in the UK, says a new report [pdf]. For the lowest earning people, the cost of housing has risen faster in the UK than almost anywhere in western Europe. This puts more people at risk of becoming homeless. There is “another” Europe emerging as austerity impacts on thousands. Although the trend exists throughout Europe, the UK’s record is one of the worst.

A report [pdf] by the European Federation of National Organisations Working with the Homeless (FEANTSA) examined rising housing costs for the poorest people in society. It placed the UK second to last. FEANTSA director Freek Spinnewijn said [pdf, p4]:

Housing exclusion and homelessness have taken dramatic proportions in the UK. For almost all indicators the UK scores bad in a European perspective and the situation has often worsened over the last few years. Especially worrying are the massive increase of rough sleepers (137% increase since 2010) and homeless people in temporary accommodation (73% increase since 2011). The situation of young people on the housing market is also becoming hopeless.

Since 2010, there has been a 70% increase [pdf, p1] in the number of households spending more than 40% of their income on housing. As The Guardian reported:

The cost of a home for the lowest earners has risen faster in Britain than anywhere in western Europe… Housing costs for people who earn about £16,000 a year increased by 45% between 2010 and 2016.

The report also established [pdf] that, in the UK:

We need to shift the thinking about housing – it should be seen as a right, and not as a reward. Long-term housing is a prerequisite for well-being, recovery and social integration. It is a means – and not an end – to the protection of all social rights and personal development of an individual.

Across Europe, the study revealed that:

The report also found [pdf] “another” Europe is growing fast:

a Europe not merely ignored but also misunderstood, not just despised but also forgotten – a Europe of the homeless. Children now make up the largest group of people in emergency shelters. Women, young adults, people with a migration background and the working poor are also increasingly numerous among the homeless population.

We have compiled some housing exclusion & homelessness country profiles based on the data in the 3rd Overview of Housing Exclusion in Europe – countries covered are BE, DE, ES, IE, NL, PT & UK > check it out here https://t.co/sk2d18zGhe pic.twitter.com/POnhsU3iMO

This study states that, without significant change, the homeless crisis in the UK will continue. Since 2010, the number of people sleeping rough in the UK has risen 169%. According to government estimates [pdf, p3], there are 4,751 rough sleepers in the UK. Homeless charities said even this rise failed to reflect actual levels of rough sleeping.

On average in the UK, poor households spend 47.4% of their disposable income on housing (spending more than 40% of one’s income on housing is known as housing cost overburden and is generally regarded as the benchmark above which general welfare and standard of living is threatened).

Findings like this suggest that statutory homelessness will continue to rise. As reported in The Guardian, the FEANTSA report:

concludes that in England the main cause of statutory homelessness is the termination of private rental contracts, when people cannot afford to find another home.

The report also identifies [pdf] a “chronic” lack of affordable housing in the England.

In addition to a rise in statutory homelessness, it’s likely that this lack of housing will push many more people into the soaring numbers of hidden homelessness.

FEANTSA [pdf, p9] states that, according to the UN, it is a government’s responsibility to “design and implement policies, laws and strategies to prevent and remedy homelessness”. And:

Failure to do so reflects that homelessness has neither been recognised nor addressed as a violation of human rights.