Spare us the faux outrage, Jeremy Corbyn had to sack Owen Smith - Canary 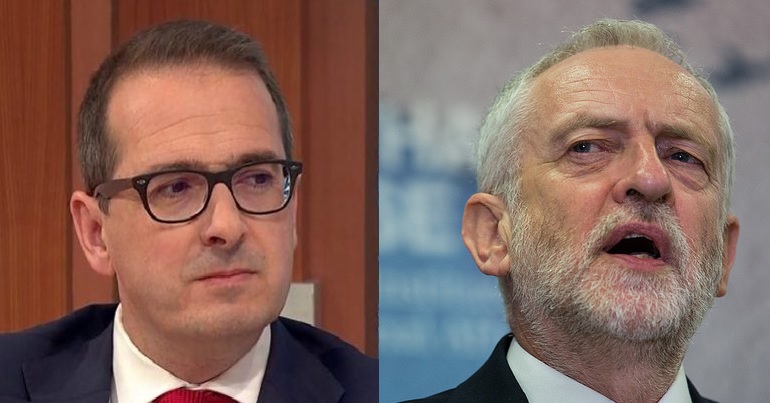 Jeremy Corbyn has come under heavy criticism from political commentators and members of his own party after sacking shadow secretary for Northern Ireland Owen Smith on 23rd March.

Missing from the faux outrage, however, is that Smith broke the code of cabinet collective responsibility. So Corbyn had no real choice but to fire him.

One criticism came from Labour peer Peter Hain. He described the firing of Smith as a “terrible Stalinist purge”:

This is a terrible Stalinist purge @OwenSmith_MP has been doing a terrific job on Northern Ireland he’s ideal for the role with his experience expertise and considerable ability. Widely respected. In a Shadow Cabinet with few big hitters he was definitely one https://t.co/hq5mpdbsOx

Smith, who previously ran a failed leadership challenge against Corbyn, published an article for the Guardian on 23 March. In it he argued for a second referendum on the terms of Brexit. This view is at odds with Labour’s stated position [pdf p24] on Brexit:

Labour accepts the referendum result and a Labour government will put the national interest first.

This isn’t the first time Corbyn has disciplined a shadow cabinet member for going against party policy.

The Labour leader came to a “mutual decision” with longtime ally Chris Williamson for the latter to resign in January. Williamson broke with the party’s position when he argued for higher council tax on more expensive properties.

Chris Williamson who is a Corbynite also broke the code of Collective Responsibility and was also duly sacked.

While it may open him up to criticism, Corbyn has been consistent in his dealing with cabinet rebellion. Even if his actions cost him, in the case of Williamson, an ally on the frontbench.

But certain Labour MPs were quick to express their shock and alarm at Smith’s removal. They appeared to view the move as Corbyn punishing Smith for his pro-remain stance. However, some others were quick to point out an important point missing from the outrage.

Owen Smith was not sacked for his position on Brexit, which he was quite free to argue for in Shadow Cabinet. He was sacked for deliberately arguing against key Labour Policy in the media https://t.co/yHkuQvb8qo

Hardly surprising, there is such a thing as collective shadow cabinet responsibility and clearly Smith doesn't believe in it, given his freelancing comments this week on something that wasn't his brief. Undisciplined parties don't win General Elections https://t.co/sAHN0Hz4HU

Furthermore, sacking one frontbencher is hardly a “purge”:

A clear breach of conduct

By publishing views at odds with the Labour party policy, Smith broke the code of cabinet collective responsibility. Members of the cabinet or shadow cabinet are required to publicly support the positions decided by the party, according to the code. This applies even if they do not privately agree with the stance.

So Twitter users asserted that Corbyn had no choice but to fire Smith:

No, having accepted a front bench role, which nobody forced you to do, you have chosen to break collective responsibility. A deliberate and calculated act, which no Party leader could possibly ignore. https://t.co/aAcVe2Y4x0

I’m sure he is all those things but no, his mistake was to disagree publicly with the official party position on a major issue without resigning. Of course he was sacked from the Shadow Cabinet for that. Mr Corbyn should not be judged by a different standard to other leaders. https://t.co/UBCTnkoctt

The rules are simple

Smith is perfectly entitled to his private opinions. However, regardless of how principled his stance he had a duty to support the party’s official position. He failed in this duty, so sacking him was the only sensible option.