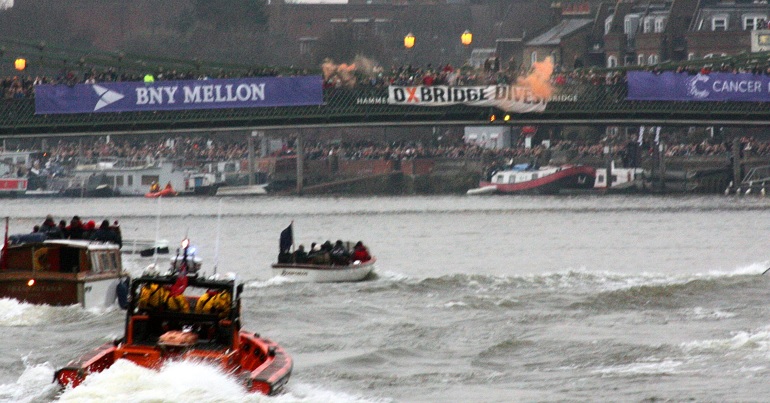 Oxford and Cambridge students disrupted the annual Cambridge and Oxford Boat Race on 24 March. They called on their universities to ‘divest’ from fossil fuels and remove the money they currently have invested.

The action was part of long running campaigns against fossil fuel investments at both Oxford and Cambridge. Campaigners argue that such financial links provide both funding and moral support for an industry that contributes to climate change.

Both universities also featured in the Paradise Papers scandal in 2017. It was revealed that the two elite universities had invested tens of millions of pounds in offshore funds, including in an oil exploration project.

For as long as Cambridge continues to fund climate breakdown and disregards its commitment to sustainability, we’re going to keep putting public pressure on University management. It’s time for Cambridge to listen to its students and staff, reflect on its moral obligations, and divest from fossil fuels.

imagine two universities investing in a sustainable future. Such a future simply cannot involve fossil fuels – for the good of both people and planet.

Three other universities committed to cut their ties with the fossil fuel industry recently. Durham, Bristol and Cardiff universities all ended [paywall] their investments. Cardiff did so following a student hunger strike.

More and more universities are ending their links with fossil fuels. Campaigners are now hoping Oxbridge will follow suit.