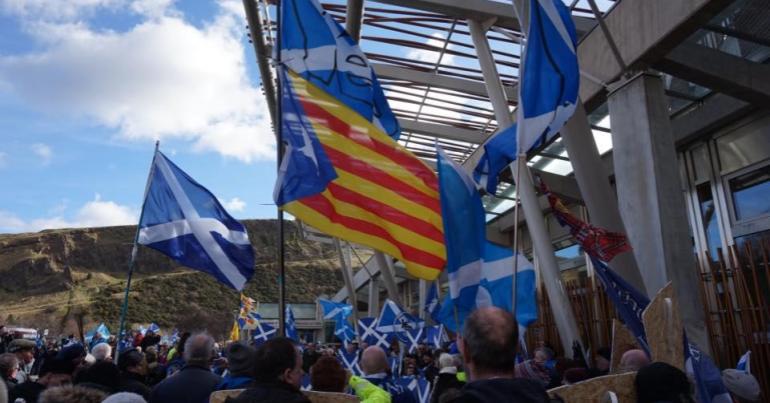 Thousands gathered at the Scottish Parliament on 23 March, to voice opposition to a UK government “power grab”. Linking arms around the whole of Holyrood’s perimeter, protestors raised signs with slogans such as “Hands Off Our Parliament”.

But the action has barely been reported in the media, outside of Scotland.

Organisers rallied against the EU withdrawal bill, which they claim is in breach of the Scotland Act. Speakers claimed the UK government is attempting to ‘undermine’ devolution by putting certain powers solely in the hands of Westminster.

Both the Scottish and Welsh governments are opposed to the current withdrawal bill. On 21 March, Scotland’s alternative Brexit bill was passed in Holyrood by 95 votes to 32. The bill aims to protect devolution. The Conservatives were the only party to oppose the bill.

It was estimated as many as 3000 people linked arms around the edges of Holyrood. Protestors then raised blue shields at the front entrance in an act of defiance.

Bagpipers played as Saltires, EU and Catalan flags flew overhead. Several people took to the mic to address the crowd.

Speaking at the event, pro-independence columnist Paul Kavanagh claimed that Conservatives were using Brexit as “an excuse to undermine the devolution settlement”. Kavanagh said:

This isn’t actually… a pro-independence event. This isn’t about Scotland asking for something that we want. This is about protecting the things that we already have.

There are many people within the Conservative party who wish to use the excuse of Brexit in order to draw back on the devolution settlement and claw back and grab powers from that building [Holyrood] back to the palace of Westminster.

The protest gathered unexpected momentum and a larger turnout than organisers had planned for. But some complained about the lack of media coverage.

There was no mention of the protest on BBC News at Ten, despite there being a section on Brexit. On Reporting Scotland there was an approximately 30-second segment in the second half of the show.

Scotland’s main Broadcasters are not aware of the #hoop demo taking place at our parliament today.
However, yesterday they both reported live from a 6 man demo on The Thames in London. @BBCScotlandNews @STVNews #snp pic.twitter.com/E0cNNnB4ra

The protest did feature in the Scottish press the following day. Pro-independence daily The National splashed the story on it’s front page.

The UK government have said their focus continues to be finding an agreed way forward with the devolved administrations.