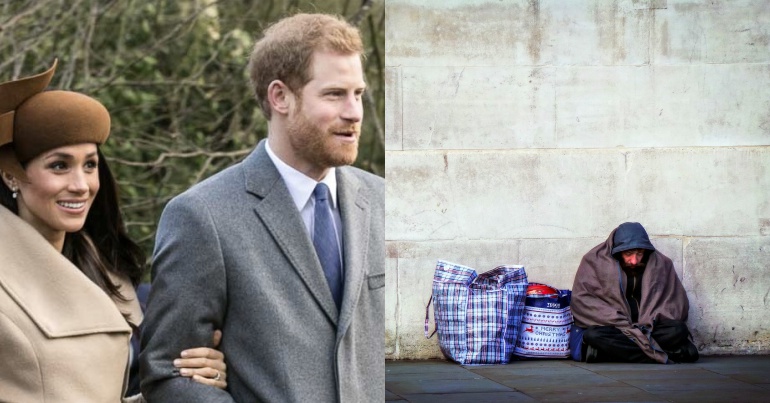 It’s difficult to escape the fact that a prince is due to marry a TV star on 19 May. The mainstream media has gone royal wedding gaga already. But plans for the lavish event have taken a more sinister turn. Again.

Police have reportedly been removing sleeping bags and other possessions from homeless people in Windsor.

Homeless people were told that their belongings, including books, magazines and bedding, will be kept in storage until Monday, as part of added security measures.

The police said that the rough sleepers involved voluntarily handed over their belongings, in a scheme organised by the Windsor Homeless Project.

People have been swift to respond to this move on twitter:

If Windsor council want homeless off streets,why not inform them about right to council flat & temporary accommodation immediately in meantime under Housing Act 1996 & Homelessness (Priority Need for Accommodation) Order 2002 instead of taking belongings?! https://t.co/VmQrVdZWP9

The Windsor homeless and their sleeping bags should be asked to move to the royal golf course, with sleeping tents, dining tents, hot food, tea, portable toilets, and shower tents waiting for them. Not only for the royal wedding weekend. https://t.co/QYEx38hOCb

People have also drawn attention to the huge cost of the wedding:

So the Tory council are taking the sleeping bags and possessions of the homeless public around Windsor getting ready for the Royal Wedding which will cost the public £32,000,000 plus. Couldn't they have set up a hostel to make these poor people comfortable for this time. No Care. pic.twitter.com/UeZ8rJes5M

“Royal wedding could cost more than £30m” : just how many homeless and hungry could that house/feed ? https://t.co/w0moVF5nLC

Taxpayers will reportedly pay for security costs of around £30m.

One of the people affected by the move is Sunil, who has been sleeping rough in Windsor for eleven months. He told the BBC Asian Network:

The police are saying to me that I’ll probably get trampled and all that because of the amount of people that are gonna be coming here to Windsor.

So he’s been offered a ‘solution’ for the few possessions he owns:

The police are saying to me that… I can put it in… a storage lock up that they’re gonna… have for us at the local homeless centre because they reckon there’s probably gonna be an obstruction of… the highway.

Ahead of the #RoyalWedding, we meet Sunil, a homeless man who normally sleeps opposite Windsor Castle. pic.twitter.com/ha9oyaRNcf

But this police action also highlights another big problem. Because others are desperate to secure a good view of Megs and Hazza on their special day. So many people will be ‘camping out’ in the build-up to the wedding:

Remember, it’s illegal to sleep on the streets of Windsor if you’re homeless, but absolutely fine if you do it wrapped in a flag. pic.twitter.com/9dn1hUTZ3y

Of course, the homeless of Windsor are moved on by police before the big day, but it’s fine for these fucking idiots to camp out days before the day itself. #bbcnews pic.twitter.com/ES69A6KttC

As The Canary previously reported, councillor Simon Dudley suggested in January that police should use the 1824 Vagrancy Act and the 2014 Antisocial Behaviour, Crime and Policing Act to remove homeless people in Windsor for the wedding. He claimed “homelessness is completely unacceptable in a caring, compassionate community such as ours”.

Even Theresa May, MP for neighbouring Maidenhead, ‘slapped down‘ Dudley. But he survived a vote of no confidence from council opposition.

Thames Valley Police claim they “won’t be clearing homeless people from Windsor’s streets”. But as the Guardian reported:

This week, the council declined to answer specific questions from the Guardian on what action had been taken since the furore to help rough sleepers and what plans had been made for the royal wedding weekend.

So they’re not clearing people. Just their possessions. But if you drape yourself in a Union Jack flag, there’s no issue.

This is the state of our nation. Social cleansing is here.

– To show solidarity for homeless people across the UK, there’s a Royal Sleepover planned on 18 May. And on the day of the wedding, there are also several peaceful demonstrations planned.