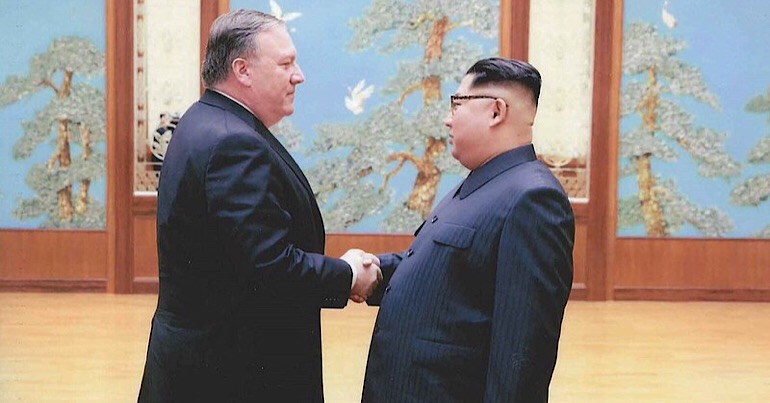 How we got here

Trump’s warmongering rhetoric pushed the Korean Peninsula to the brink of war in 2017. Many saw his ‘fire and fury’ comments in August of that year, for example, as a needless provocation at a time of heightened tensions.

President Trump just suggested his "fire and fury" warning to North Korea "wasn't tough enough." What do you think? pic.twitter.com/BRA6auSMsz

This was before Kim’s pivot toward a more diplomatic approach, which started with an offer to send a delegation to the Winter Olympics in South Korea.

Now, as a peace summit hangs in the balance, Trump’s newly installed war cabinet can’t get on the same page.

Trump’s new secretary of state Mike Pompeo played good cop, talking [paywall] up US investment in the country if the North ditches its nuclear arsenal.

In early May 2018, 18 of Trump’s Republican allies in Congress nominated him for a Nobel peace prize. The nomination was part of a bid by congressman Luke Messer to shore up his pro-Trump ‘street cred’ ahead of a failed senate primary race.

Seven GOP governors followed suit in a letter later in the month, saying Trump “succeeded in opening new avenues of cooperation, friendship and unity between the two Koreas.”

Both these efforts now seem like terribly premature political theater in the light of more recent North Korean moves.

Long memories of the ‘Forgotten War’

Beyond the problems of the moment, the bloody history of US involvement in Korea already posed serious challenges.

The US killed as much as 20% of North Korea’s population during the Korean War, a war that has never officially ended. The US also supported a series of right-wing dictatorships in the South in the decades afterward.

While the conflict may be glossed over in US history, it remains very much alive in the North.

While the Trump administration sees North Korea’s nuclear program as problematic, the US has its own nuclear problem.

It’s worth noting that of all the countries that have nuclear weapons, only the US has used these weapons in wartime.

And while estimates for North Korean nuclear material range from an amount necessary to build fewer than 10 to as many as 60 bombs, the US has at least 6,800 nuclear weapons.

Further, the Trump administration’s recent track record of pulling out of a nuclear agreement with Iran could hardly lend credibility to its already low reputation in Pyongyang.

If the US wants to be a force for peace in the world, peace should start at home.

The US should join more than 120 countries who have called for a ban on nuclear weapons.

The US and South Korea could also take the opportunity for peace seriously. Temporarily suspending joint military exercises, for example, would be a show of good faith.

Instead, the White House has said that, if North Korea walks away from the table, it’s prepared to resume the saber-rattling foreign policy that got us here in the first place.

Sarah Sanders on North Korea threatening to pull out of summit: "This is something we fully expected. The president is very used to & ready for tough negotiations & if they want to meet, we'll be ready. If they don't, that's ok too & we'll continue w/campaign of maximum pressure" pic.twitter.com/RVAGZ5SrJk

– Join or support Code Pink; and show your support for Veterans for Peace, who are fighting for peaceful solutions to the world’s problems.