You may have missed a Green politician annihilating the government over Brexit. So here it is. - The Canary 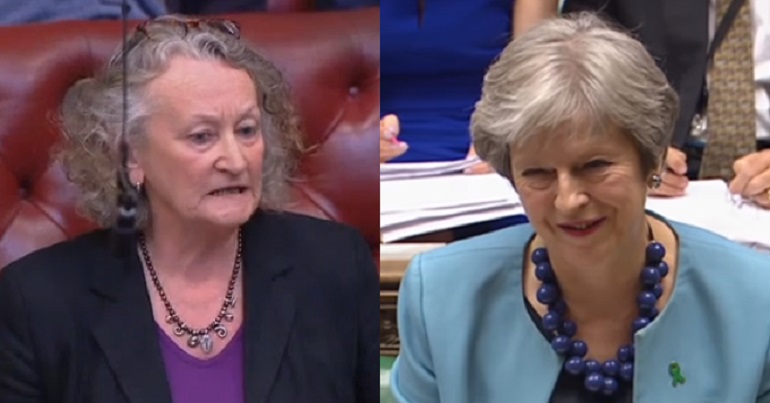 On Wednesday 16 May, the government suffered its 15th defeat in the House of Lords over the EU withdrawal bill. Central to that rinsing was a Green Party peer, whose stinging speech wiped the floor with the Conservative Party.

Another day, another Brexit amendment

Jenny Jones, or Baroness Jones of Moulsecoomb, was speaking during a House of Lords debate into environmental protections after Brexit. It centred on a government consultation document which outlined its plans for “environmental principles and governance” after Brexit. But many peers don’t believe the government’s plans go far enough. So an amendment was tabled by crossbench peer Lord Krebs. It said the government:

must take steps designed to ensure that the United Kingdom’s withdrawal from the EU does not result in the removal or diminution of any rights, powers, liabilities, obligations, restrictions, remedies and procedures that contribute to the protection and improvement of the environment.

Supporting this amendment was Jones, who herself voted to leave the EU. In a blistering speech, she poured scorn on the government proposals, mocked the Conservatives, and robustly refused to give way to any interventions.

Jones said that, while she voted to leave the EU, having a “successful” Brexit is “having a green Brexit”. At the same time, she noted that Brexit is also about the government “honouring its promises” to move EU law into UK law.

if we don’t replace the legal powers of the [EU] Commission; and the ECJ [European Courts of Justice]; and the environmental principles that underpin them, then Brexit will be a disaster from an environmental point of view.

Jones wryly noted that the government was split over the terms of Brexit, saying that:

We have a wonderfully ambitious environment secretary [Michael Gove] on the one hand, whom one can almost imagine frolicking in a field of wheat. And on the other hand, an international trade secretary [Liam Fox] who dreams of GMO-fed beef and chlorinated chickens from factory farms in America.

Twice, other peers asked Jones to give way so they could speak. And twice, Jones vigorously objected, telling one “No. No. No” and saying to an other “Really? Really?”. She shut one Conservative peer down when he suggested she submit her thoughts to the official consultation, implying her speech was a waste of time. Jones gave a swift rebuttal, saying:

I thank the noble lord for his intervention and I most certainly will do that. That’s a very good idea, thank you.

She was determined to hammer her point home.

Perhaps crucially, Jones said that other members of the House of Lords had called the government’s proposals “feeble”. She called them, and its ideas for an environmental watchdog, “toothless”. But she summed up her thoughts by saying:

It seemed the majority of the House of Lords agreed, as the amendment was passed by 294 votes to 244. Jones said pointedly that “our government cannot be trusted on environmental issues”. It seemed that many peers agreed with her. So this part of the bill will be sent back to parliament; like the 14 other amendments on which the Lords have so far defeated the government.