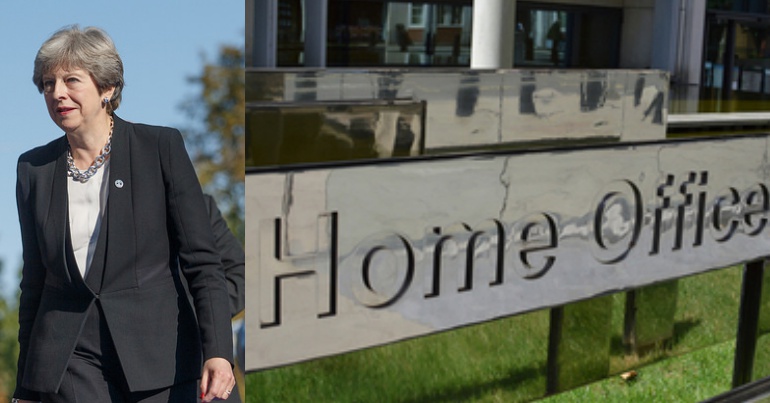 As the Windrush scandal continues, the Home Office has come under further criticism. A damning new report reveals that it puts “lives at risk” with an asylum system that “dehumanises, disempowers and damages” people. Ultimately, Theresa May holds responsibility.

Britain’s asylum system often does immense damage to people who come to this country to claim protection.

The report found that:

Bad practices and poor decision-making are putting lives at risk.

Mariam Kemple Hardy, head of campaigns at Refugee Action, told The Canary that there were “fundamental problems” with a system that deals with “life and death” situations. Lack of legal support, delays in Home Office decisions, and a rising number of appeals against incorrect decisions are devastating for people who have fled to the UK for safety.

Many need treatment for depression and anxiety. But the report also established that Home Office delays take “a tremendous toll on people’s wellbeing”. For example:

During the five years they waited for a decision, Tristan’s wife was diagnosed with a brain aneurism, which the doctors said was brought on by the stress she had experienced since the family had arrived in the UK.

an asylum system that is too often damaging, dehumanising and disempowering those who rely on it to make life-changing decisions.

Despite Home Office targets to make a decision on asylum status within six months, more people than ever now face a longer wait. According to the report [pdf, p10]:

It found the Home Office has a severe backlog dealing with cases. This leaves vulnerable people “in a state of uncertainty”. Not least because they’re:

living below the poverty line, banned from working and unable to rebuild their lives.

Some people have waited five years for a decision. The government needs to know that the current system is devastating people’s lives.

But one of the most damning aspects of the report shows [pdf, p10] that, even after a lengthy wait, there are concerns about Home Office decisions. Refugee Action found:

indications that quality remains below the standards that are expected from a system whose decisions have such a far reaching impact on those who go through it.

Even when applications are turned down, “over a third of appeals against asylum decisions” succeeded [pdf, p10] at appeal:

meaning that the Home Office’s decision to refuse somebody’s claim was deemed incorrect by the courts.

And this number was even higher for certain nationalities for whom [pdf, p10] “over half of all decisions were overturned”:

Kemple Hardy explained that there is something “fundamentally wrong” with the system but also that:

Crucially, the interpreters they’ve been using have not been accurate. I can’t think of anything more distressing than to know that the reason why you’re claiming asylum is not fully understood.

But this report goes further than damning statistics. Because it’s also based on interviews with 40 asylum seekers. Their voices show the true impact the Home Office has on people’s lives.

Rose, a victim “of human trafficking who was forced into prostitution in the UK”, said [pdf, p16]:

The substantive interview [was] an experience I don’t ever want to experience again in my life. I’d rather die. Because the lady who interviewed me, there was no sign of empathy… She wasn’t putting into consideration the fact that I had been through hell. And in my heart I wished I could let her live my life for one day, what I lived. And maybe she would have empathy to understand where I’m coming from.

According to Samira [pdf, p5]:

It’s shameful if you say you are asylum seeker. It’s not easy… They treat people like liars. They think everybody is lying… It really shocked me. We are human beings, flesh and blood… Stop treating us in an unhuman way.

And others, like Qadir [pdf, p5], explained the simple fact that:

Nobody would leave their own country and apply for asylum for no reason. But right now I have no rights in this country. When I compare myself with others, I am an outsider. I am deprived of the basic rights that others have.

Listening to these voices, it’s clear – yet again – how badly the Home Office and May’s government fail to support some of the most vulnerable people in society. Radical change is needed, and it’s needed now. Windrush shows that public outrage can lead to policy changes – this needs to happen again.

– Write to your MP and ask them to tell the Home Secretary that our asylum system is in urgent need of reform and follow the #StandUpForAsylum hashtag on Twitter.