There was chaos outside PMQs today. Not that the mainstream media noticed. - Canary 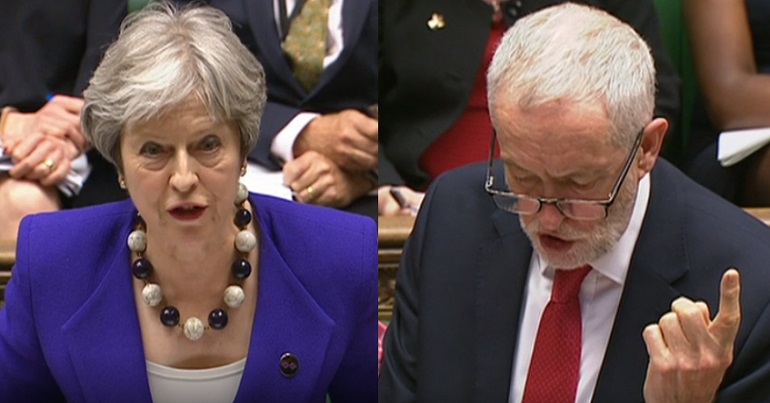 There were chaotic scenes outside Prime Minister’s Questions (PMQs) on Wednesday 18 April. Not that the mainstream media bothered to report it.

Disabled People Against Cuts (DPAC) is at the forefront of the disability rights movement in the UK. As well as high-profile protests, legal actions, and campaigns, the group was also instrumental in securing a report from the UN. The report accused successive Conservative-led governments of “grave” and “systematic” violations of disabled people’s human rights, creating a “human catastrophe”.

But now, the group has turned its attention to Universal Credit, the new welfare payment from the Department for Work and Pensions (DWP). It had organised a day of action on 18 April, and it brought its grave concerns right to the heart of parliament in the middle of PMQs.

DPAC activists began by occupying the central lobby in parliament just before midday. They set up a crime scene to highlight what they call the ‘crimes against claimants’ under Universal Credit. The new benefit has been linked to 160,000 more children losing free school meals. Also, the Trussell Trust says it’s seen increased food bank use in areas where Universal Credit has been rolled out: 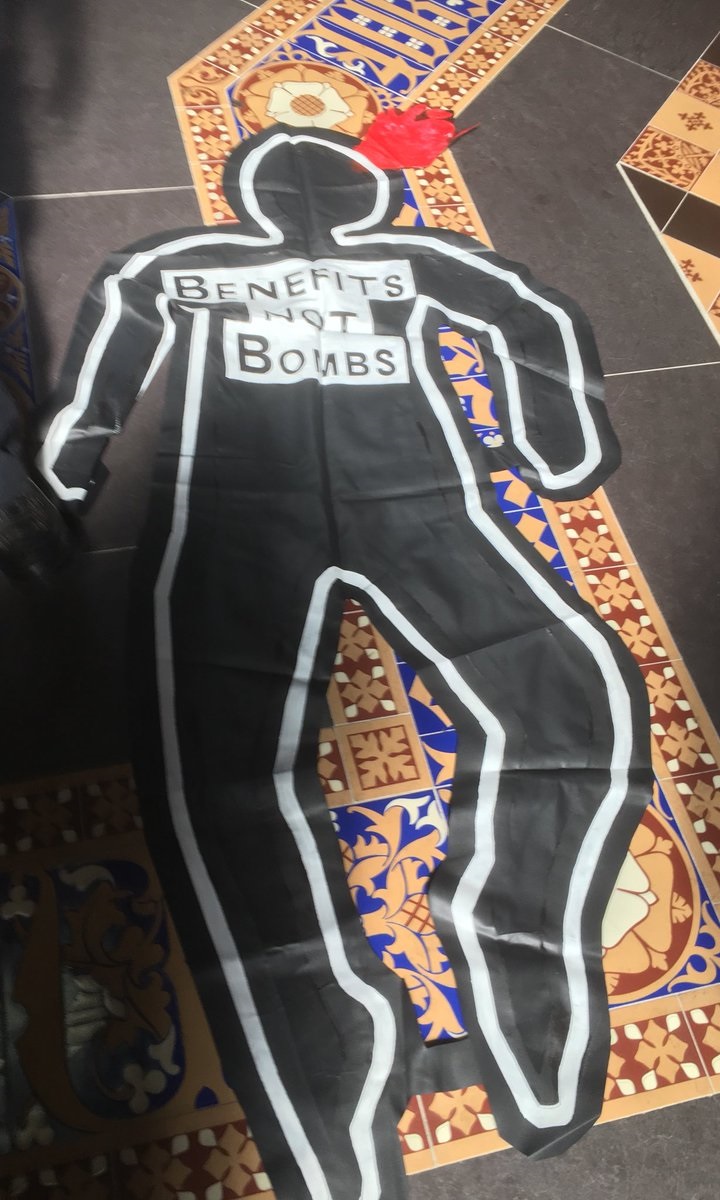 Disabled people tried to “storm” parliament. So, a heavy police presence ensued, with DPAC members facing them down: 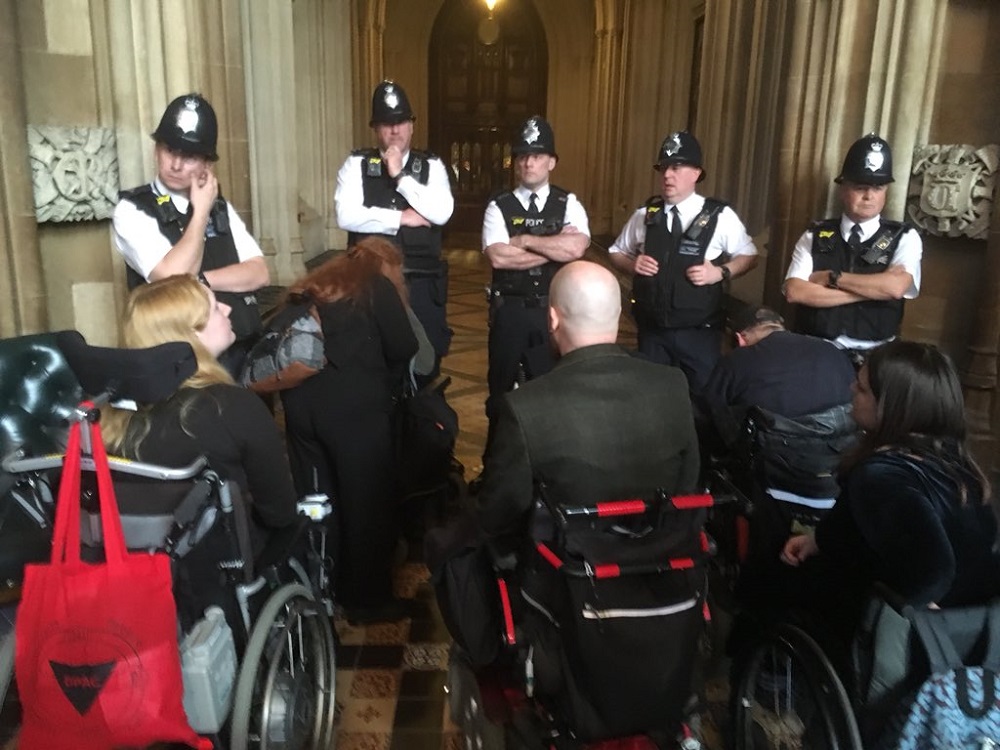 Activists accused the police of ‘heavy-handedness’ inside parliament. The protest then moved outside, with conscious rapper and poet Potent Whisper performing for the crowds: 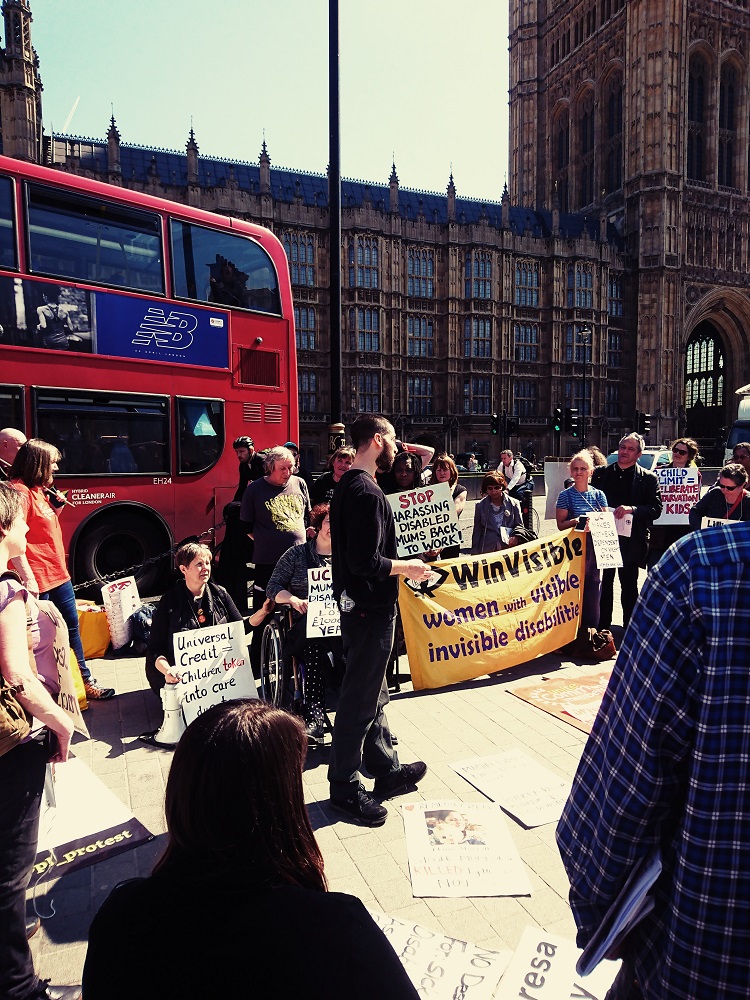 DPAC and its supporters then moved down to Westminster station junction:

Around 80 people blocked the road, stopping traffic in all directions: 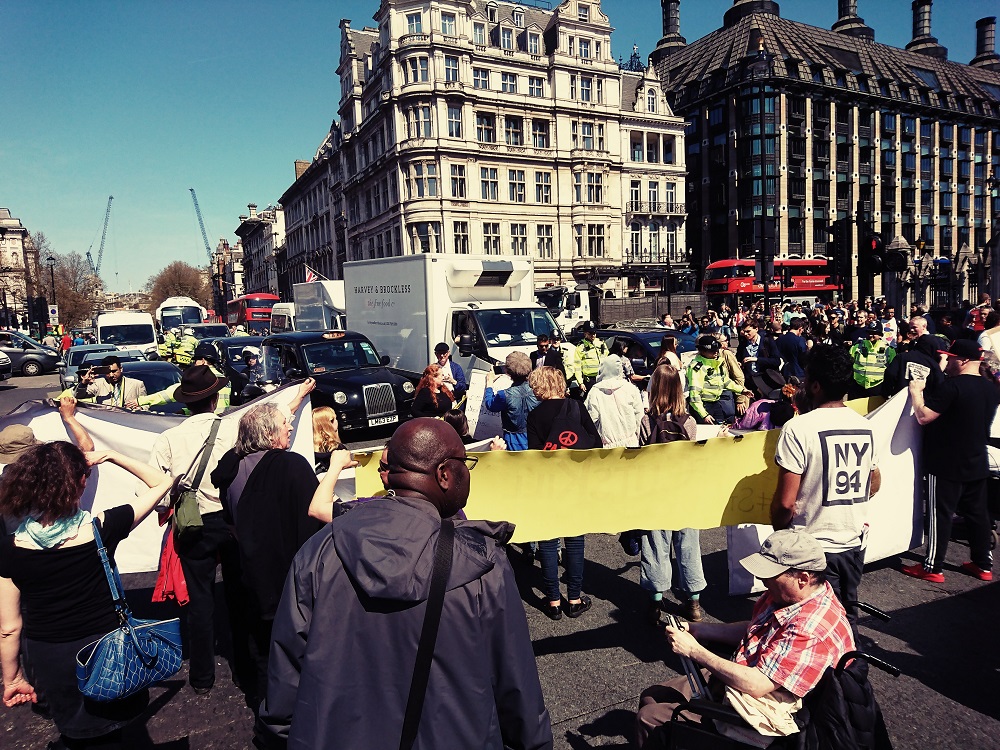 The crime scene was recreated: 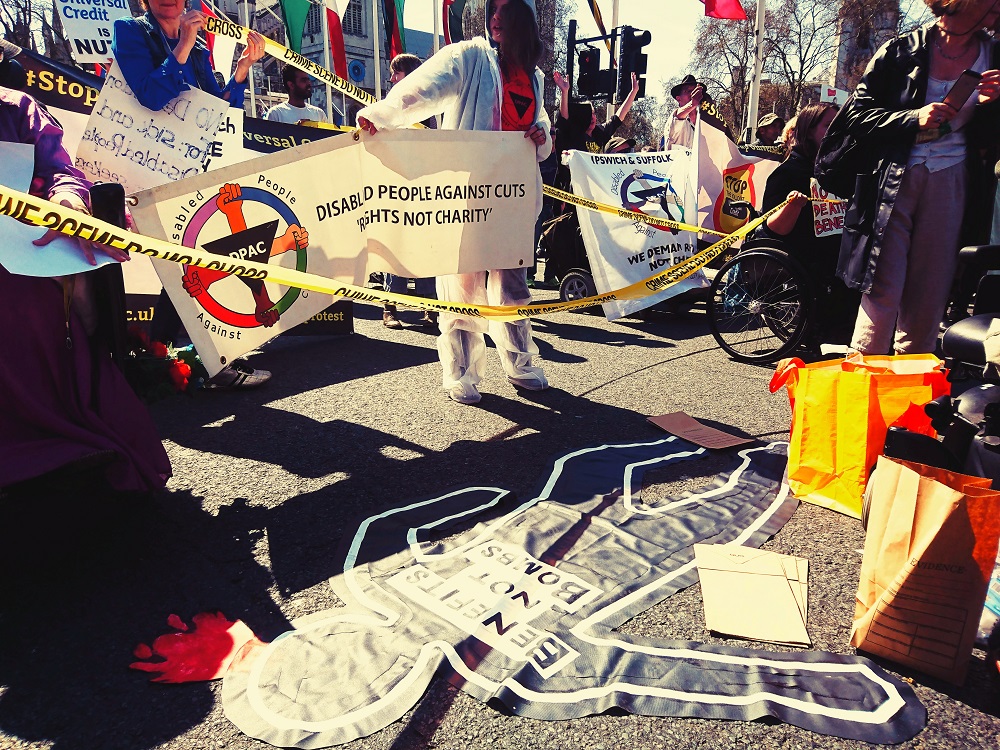 Chants of “Benefits not bombs!” “Stop and scrap Universal Credit” and “Whose streets? Our streets!” were ringing out against the backdrop of parliament: 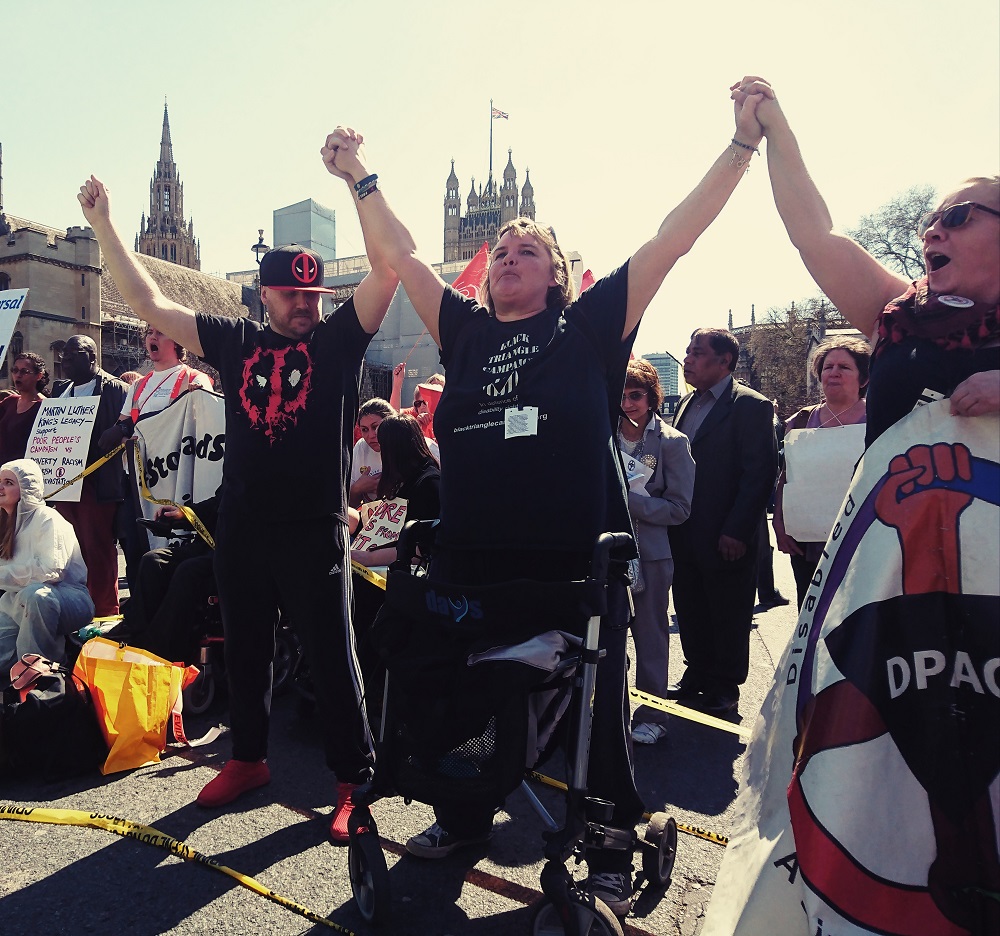 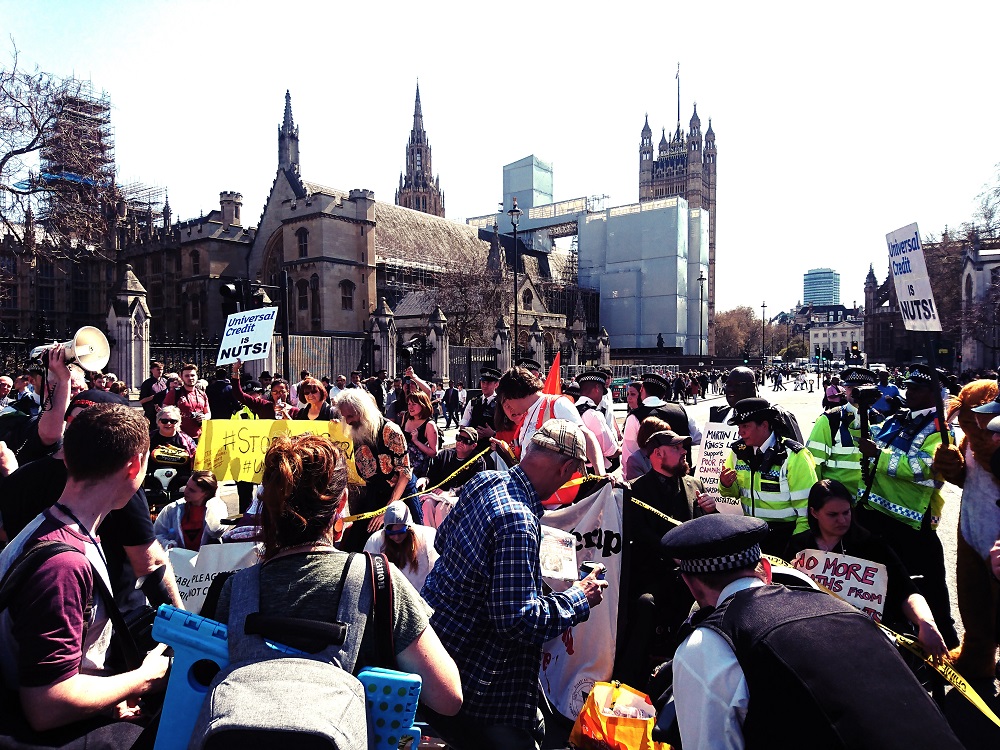 The only MPs that came out to support DPAC were Labour’s Debbie Abrahams and Laura Pidcock. After around an hour, police starting threatening disabled people with arrest if they did not move: 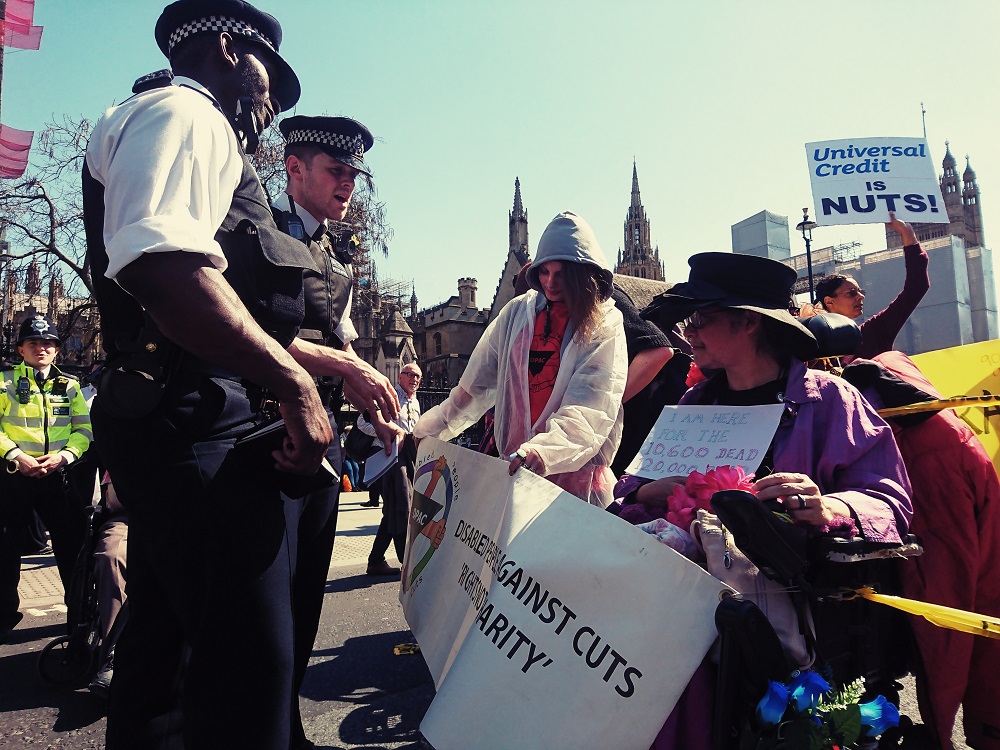 Police even threatened a squirrel with arrest:

But protesters continued blocking the road until about 2pm: 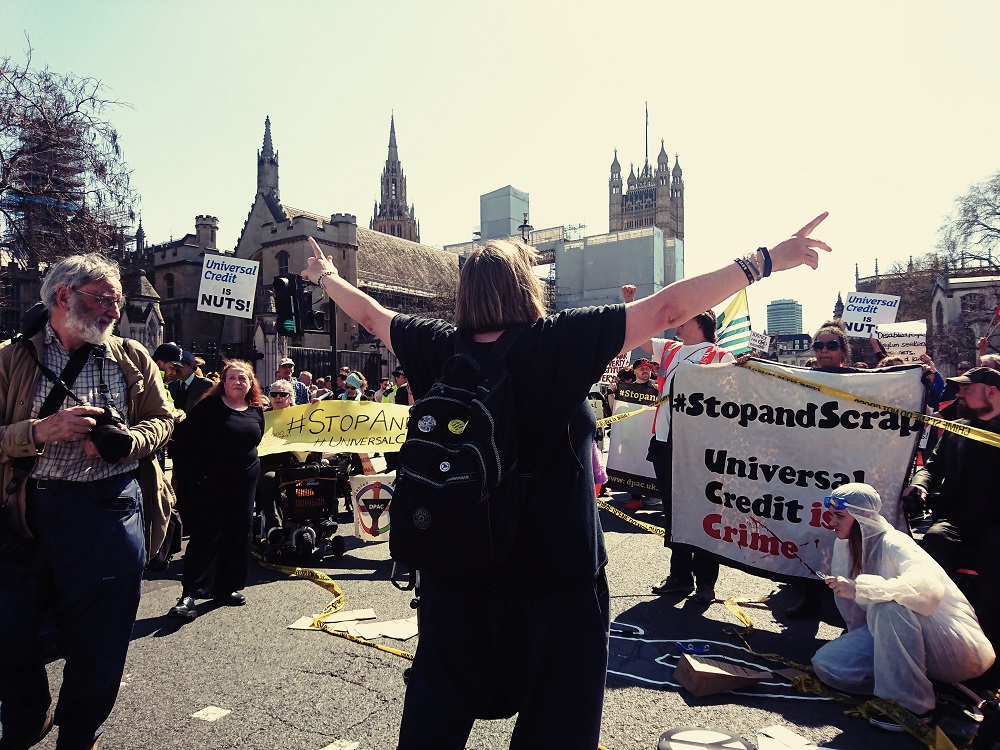 Protests were also happening up and down the country at the same time:

@Dis_PPL_Protest here we are in Brighton with B&H DPAC and The BHIG group telling people about the problems with Universal Credit #StopandScrapUniversalCredit pic.twitter.com/mgazAyxW4G

DPAC has extensively detailed its concerns over Universal Credit. These include:

The DWP previously told The Canary:

But the evidence on Universal Credit doesn’t hold weight with the DWP’s argument.

Despite DPAC’s and others’ concerns, the government has barely made any concessions on Universal Credit. So it’s once again down to disabled people to hold this government to account. And on 18 April, they did so in a brave and uncompromising way.