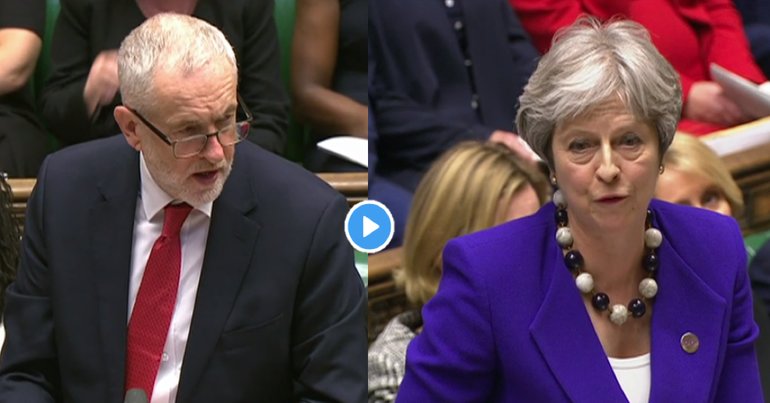 Jeremy Corbyn took Theresa May and her government to task at today’s Prime Ministers Question Time (PMQs). The prime minister attempted to dodge responsibility for her part in the Windrush scandal, but in moments, Corbyn took her excuses apart.

While home secretary, Theresa May passed an immigration bill which undid the rights of the Windrush generation. Jeremy Corbyn was one of a handful of Labour MPs who voted against the bill at the time.

Don't think it's been mentioned nearly enough that when the Tory/LibDem Coalition brought in the 2014 Immigration Act which caused the Windrush Scandal, only 18 MPs had the courage to vote against. They included David Lammy, Diane Abbott, John McDonnell and Jeremy Corbyn.

Jeremy Corbyn in 2013. I reckon he is a Time Lord tbh. pic.twitter.com/kgBhiD7QOM

People have lost their jobs, been denied life-saving treatment from the NHS, and even been deported. It was only after the scandal made headlines that May and her home secretary Amber Rudd were forced to U-turn. But people are still being deported, and those who have already been deported face an almost impossible journey home.

It later emerged that the Home Office had deliberately destroyed the registration slips of Windrush citizens. This has made it impossible for many to prove their citizenship. But May laid the blame at Labour’s door, claiming it was decided under the Brown government in 2009. It took mere moments to fact check this as false.

A Point of Order by @DawnButlerBrent has just confirmed that Jeremy Corbyn was correct at #PMQs, and Theresa May misled Parliament today. The #WindrushGeneration records were destroyed under a Tory Government in 2010, when Theresa May was Home Secretary. She is an utter disgrace.

The Labour leader was in no mood for May’s excuses, saying:

This is a shameful episode, and the responsibility for it lies firmly at the prime minister’s door.

Her pandering to bogus immigration targets led to a ‘hostile environment’ for people contributing to our country. It led to British citizens being denied NHS treatment, losing their jobs, homes, and pensions, thrown into detention centres like criminals and even deported. Vital historical records shredded and ministers blaming officials…

Isn’t the truth… that under her the home office became heartless and hopeless?

And doesn’t she now run a government that is both callous and incompetent?

Theresa May will be hoping she doesn’t pay the price for this at the local elections on 3 May.