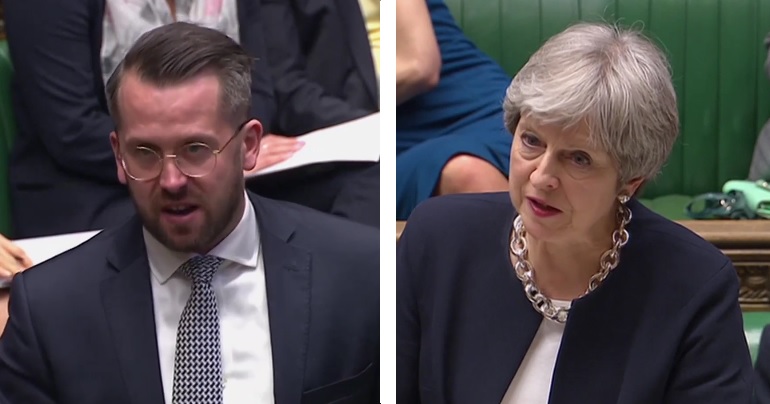 The SNP has accused Theresa May of potentially ‘misleading’ parliament over covert meetings on the Syria airstrikes with pro-war Labour MPs.

During a debate in parliament on the recent UK airstrikes in Syria, the SNP’s defence spokesperson Stewart McDonald raised concerns over meetings he’d heard about. He asked the prime minister:

Is it the case that the national security adviser has given intelligence briefings to members of the Labour opposition who are not privy councillors but instead were selected on the basis that they were sympathetic to the government’s airstrike campaign?

McDonald had also submitted the issue as a point of order in the commons. In it, he expanded his concerns over the alleged briefings:

That leads to concerns that the government is using intelligence briefings to manipulate parliament and to bolster its own case for its behaviour on the opposition benches – not on security terms, but on politics.

In response to McDonald’s question, May said:

She then, however, interrupted her own response to a different MP and revisited McDonald’s question again:

Those that have been given intelligence briefings that would not be made available to members of this house are privy councillors. That is my understanding of the situation.

McDonald pressed the prime minister again, noting that her ‘clarification’ had occurred after she had been “passed notes along the bench”. May responded:

Briefings have been offered to all members of the House, not just privy counsellors, subsequent to action.

Before action, briefing was only offered to opposition leaders.

A way with words

So May admitted that her government has had a number of briefings with MPs following the airstrikes. Other reports appear to back this up:

I know that at least one Labour MP who has had a briefing from the National Security Adviser on Syria. Seems Theresa May has questions to answer. https://t.co/GKKALerWmh

But she says that officials only briefed privy council members, who have the necessary security clearance to access intelligence, before the strikes.

She didn’t, however, answer one major point. McDonald asked whether May’s government granted those briefings due to the recipient’s position on the action. And because May didn’t provide a “solid answer” to McDonald, he says she may have “misled” parliament:

The Prime Minister has potentially misled parliament. In response to my questions to her about this just yesterday. https://t.co/UUwXIKy2rR

As author Tom Mills points out, it is grotesque that the government could be using intelligence to forward its political agenda.

What for the British elite was the main lesson of Iraq War? The politicisation of intelligence & security. And now this. Incredible.

And McDonald says the PM might be misleading parliament about what covert hook-ups took place and why. That’s not just appalling, it’s a serious accusation in Westminster.

So May better come clean about what her government has been doing.