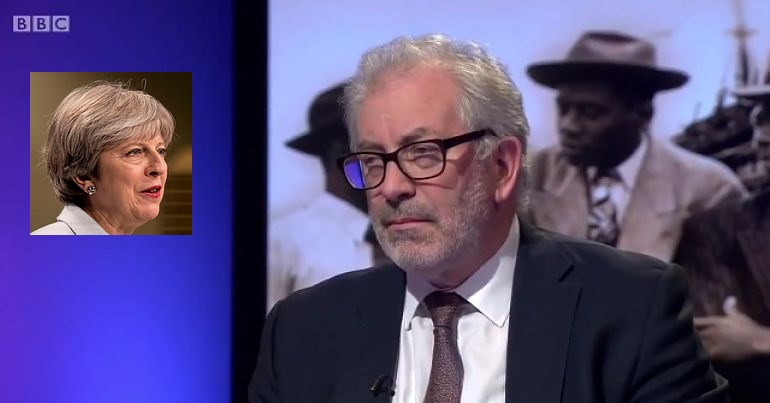 The ex-civil service chief Bob Kerslake appeared on Newsnight on 18 April where he dropped a bombshell about Theresa May. One that really should destroy her career.

Due to the recent Windrush scandal erupting, Kerslake was speaking about the government’s immigration policies. In particular, he spoke about May’s policy reforms when she was home secretary in 2014. He was the head of the civil service at the time.

That year May brought in a new Immigration Act. She vowed it would create a “hostile environment” for illegal immigrants. But it removed an important protection for the Windrush generation. These were people the government invited to Britain as citizens from Commonwealth countries after WWII.

On Newsnight, Kerslake said of the act:

This was a very contested piece of legislation across government departments.

And he explained that opposition didn’t only come from civil servants. It came from ministers too. Kerslake also detailed why May’s plans faced opposition from some ministers:

There were some who saw it, I shan’t name them, as almost reminiscent of Nazi Germany in the way it’s working.

This revelation was so shocking that the host Evan Davis asked Kerslake to clarify who he was talking about. The ex-civil service chief reaffirmed that the description came from ministers, who he said were “deeply unhappy”.

"There were some who saw it, I shan't name them, as almost reminiscent of Nazi Germany in the way it's working" – former head of the civil service @SirBobKerslake on the hostile environment policy #newsnight pic.twitter.com/eDVGYvAw8w

The Conservative government is, of course, not known for its kindness. Its austerity programme has left disabled people without support, poverty-stricken children without food, and nurses without money.

So Conservative ministers start from a pretty low baseline when it comes to compassion. Yet May’s ideas for tackling immigration were too low even for them. That speaks volumes about the UK’s current prime minister.

Or perhaps it speaks to a wider issue. Because Kerslake said that officials also raised concerns with then prime minister David Cameron about the act. Yet May still got it passed.

So maybe the issue is this: the Conservative Party has a ‘problem’ with who it chooses to put up for prime minister (it also has many, many other issues) – and who it allows to stay in that position.