In trying to defend his ex-boss, May's disgraced chief of staff has made things worse - Canary 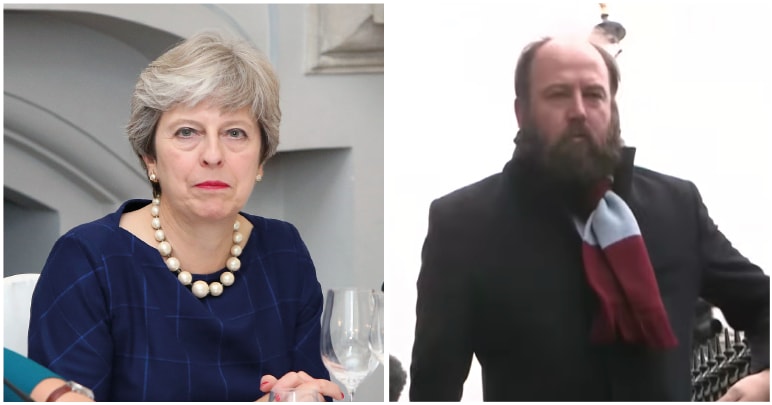 Nick Timothy is Theresa May’s former chief-of-staff. He was blamed by many Tories for the woeful 2017 general election, and took responsibility for the widely criticised manifesto. Following that disaster, he was forced out under the threat of a leadership bid against May. When he left, a sitting Tory MP tweeted:

Rasputin [has] gone! There is a God.

As a result of all this success, Timothy was employed by The Telegraph as a commentator. And it’s in this role that he’s created a fresh headache for May – claiming she did not authorise the racist ‘Go Home’ vans. This claim has led to accusations of incompetence on May’s part, and of making a misleading statement. After all, the idea that May wasn’t aware of implementation has been disputed on the record. Namely by a Tory MP. In 2016.

Timothy penned [paywall] an article for The Telegraph on 18 April. It was titled:

The Windrush scandal is heartbreaking, but it should not be used as an excuse to stop sensible migration controls

As home secretary, Theresa May was criticised for the notorious “go home or face arrest” vans that were deployed in 2013. In fact, she blocked the proposal, but it was revived and approved in a communications plan while she was on holiday. She killed off the scheme later that year, but by then the damage had been done.

This has drawn criticism because it suggests May didn’t have control of her own department:

So to paraphrase "Whilst at the HO May was unable to control her officials and did not stop them acting against her explicit directions."

This would be bad enough, but the “truth” Timothy revealed has presented an even bigger problem.

The problem with Timothy hinting May wasn’t aware of the scheme’s implementation is that there are public records saying she was. For instance, the MP Robert Goodwill claimed in 2016:

The pilot to use the AdVans referred to was authorised by former Immigration Minister, Rt. Hon. Mark Harper MP.

The former Home Secretary, Rt. Hon. Theresa May MP was informed of the intention to pilot this campaign.

According to @NickJTimothy today the go home vans were "blocked" by Theresa May, then "revived and approved" when she was on holiday.

This written answer from 2016 says they were authorised by the then immigration minister, but that May was informed pic.twitter.com/7c1e8HNf63

Comments from May herself in 2013 also seem to confirm she knew of the scheme. Speaking to the Home Affairs Committee, she said:

It was part of a package that was looked at and agreed that this package would be put forward.

If you are saying to me, Chairman, did I say to them, “I think it would be a jolly good idea to have vans going round the country,” no, it was not my initial idea.

It’s ironic for a Tory to suggest May wasn’t responsible for her own department, when the party at large thinks Jeremy Corbyn should be held accountable for strangers’ tweets.

Accountability isn’t always applied to the Tories, however, which is probably why Timothy was confident in making such a questionable claim.