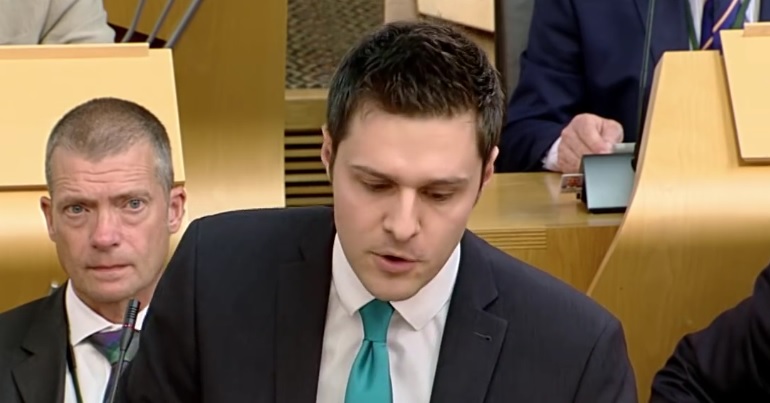 A Scottish Conservative MP is under fire for ‘disgraceful’ behaviour on a recent trip to Iraq. The SNP has accused Ross Thomson of ‘trivialising’ Saddam Hussein’s atrocities against the Iraqi people, which included using chemical weapons on them.

Coming just after an alleged chemical attack in Syria, Thomson’s behaviour couldn’t be more mortifying for the Conservative government.

Thomson was on a fact-finding mission in Baghdad shortly after the alleged Syria chemical attack happened. The Conservative MP posted images on a private Facebook page from the trip which made it look more like a jolly.

He posted a picture of himself, for example, smiling on Hussein’s throne. 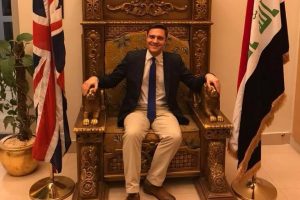 He also posted a picture of himself in front of Iraq’s Victory Arch – largely seen as a symbol of Hussein’s reign. Like many holidaymakers who visit monuments, albeit less controversial ones, Thomson posed so it looked like he held the monument in his hands. 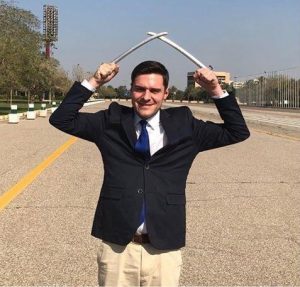 Another terrific day in Iraq. I was able to channel my inner dictator with a visit to Sadam’s [sic] military parade ground The Swords of Qadisiyah (Victory Arch) and then sitting on Saddam’s throne at the British embassy.

Not many other Scottish politicians, however, appeared to think channelling his “inner dictator” was acceptable behaviour on Thomson’s trip. SNP MSP Gillian Martin commented:

Ross Thomson may try and pass this off as a piece of ill-judged buffoonery – but his behaviour is a disgrace.

Martin also called for the Conservatives to take “swift and appropriate action” against Thomson. Scottish Labour joined the condemnation, accusing him of “committing cultural and political insensitivities abroad”.

Thomson claims he had “no intention whatsoever to cause offence”. And according to The Herald, he accused the SNP of “playing politics with a sensitive issue”.

The Conservative government has obvious double standards in its outrage. It bombed Syria in response to the alleged chemical attack there, for example, but has yet to fire a missile at Saudi Arabia for its role in creating the world’s worst humanitarian crisis in Yemen.

Thomson is guilty of the same contradictory behaviour. In fact, he was reportedly tweeting about the “horrific” situation in Syria from Iraq. So as he was condemning the “simply evil Assad regime”, he was gleefully channelling an “inner dictator” of his own.

Not to mention, of course, that Thomson was indulging his inner tyrant in a country that Britain helped to effectively destroy. So, in every way possible, this is truly a disgraceful episode for the Conservative government and its Scottish representatives.