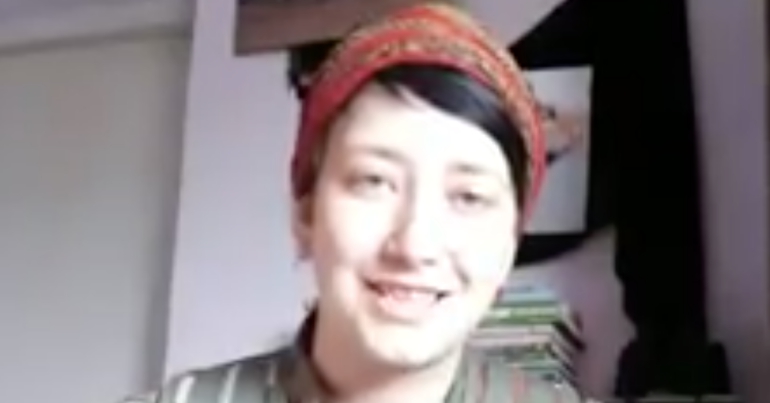 A British woman has died in Afrin, Syria. So many of my friends are grieving. And Theresa May has blood on her hands. But it’s not just Anna Campbell’s blood. May, her government, and her arms trade cronies are smeared in the blood of all the thousands of people who have died in Afrin, Yemen and countless other places.

But if one thing can come from Anna’s death, it must be a massive fuck you to the UK arms trade. It needs to be a wake-up call; a call to action. The government won’t stop the arms trade. It has no interest in doing so. May would rather roll in blood-drenched money and dine with human rights-abusing world leaders than take action to stop the sale of murderous weapons.

So it’s down to us. Ordinary people. People who can’t stomach this anymore. People who want to scream ‘not in my name’ loudly from the rooftops. It’s down to us to take action and do whatever we can to stop more people from being killed.

Anna was a brave and committed activist. Tributes have been pouring in from the groups she was involved in, including hunt saboteurs and the Empty Cages prison abolition collective. She travelled to Syria to join the YPJ, an all-female Kurdish-led force in northern Syria (aka Rojava), in May 2017. She was reportedly killed in a Turkish airstrike on 15 March.

A person who met Anna in Rojava wrote:

She spoke of her belief in the revolution and her desire to live up to the strength of the women of Rojava. I didn’t doubt it, she seemed destined for great things, a true revolutionary.

It was with great sadness that I learned of her death this morning. She was a feminist, a fighter and a brave comrade.

Following a two-month campaign, Turkey’s President Recep Tayyip Erdoğan claimed victory in Afrin on 18 March. Although exact numbers are hard to prove, over a thousand people have died, including civilians. According to the Syrian Observatory for Human Rights, 200,000 people have fled the region in recent days.

It was collective displacement. There was an endless line along the road.

Erdoğan insisted that he launched the attack to defeat the People’s Protection Units (YPG); the very people who the US and the UK have openly backed in the fight against Daesh (Isis/Isil), and who only months ago defeated Daesh in its Syrian capital of Raqqa. Yes, the people who put their lives on the line to liberate Syrian towns and villages from Daesh are now under attack from NATO‘s second-largest army.

Both US and Kurdish officials insisted at the start of the Turkish invasion that there was no evidence that the YPG had attacked Turkey. And Afrin was actually one of the calmest areas in Syria until Turkey decided to increase its attacks, hosting tens of thousands of refugees with little international support

But the UK government is more concerned with selling weapons to Turkey than protecting Kurdish communities. In May 2017, Theresa May negotiated a £100m deal to help Erdoğan develop fighter jets and improve trade relations.

UK companies such as Thales, British Aerospace, and Rolls Royce are all raking in the profits from arming the Turkish regime. All backed by government schmoozing.

As UK citizens, we sleep safe in our beds knowing that we are not going to be targeted by airstrikes. We are not under threat of an invading force displacing us and forcing us to flee thousands of miles. We will not experience the fear, panic and grief that UK weapons are causing across the world.

But that security should bring responsibility. We can all do something about it. Arms dealers have offices and factories around the country. We can shut them down. And we must. Because lives depend on it.

Rest in power, Anna. We will continue your struggle.

– Join the protests against the Cardiff arms fair.

– Find or start a local group and get involved in protests in your area.