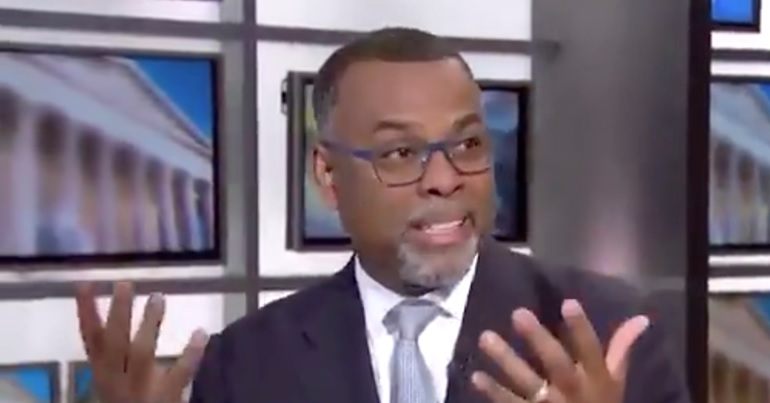 On 14 May, at least 60 people were murdered by Israeli troops. Current figures say over 2,000 people were injured as Israel Defense Forces (IDF) opened fire. Children and a baby are among the dead and injured. Israel and the US have defended the violence. But Princeton professor Eddie Glaude Jr compared this atrocity to the violence enacted against the children who marched for civil rights in the US in 1963.

On 14 May, Glaude Jr appeared on MSNBC. His co-guest was discussing mid-term elections when Glaude cut in and said:

All of those people are dead. They’re dead. And we’re talking about racehorses. I mean, the politics. I mean, there are a lot of folks who are dead today. For what?

Host Katy Tur rolled out what seems to be a stock mainstream media response:

And the White House today, their response to that was it is Hamas’s fault, and they’re using them [the Palestinian victims] as, as tools for, for propaganda.

At this point, Glaude insisted:

That’s like saying the children in the children’s march on Birmingham, it was their fault that Bull Connor attacked them.

WATCH: Speaking on MSNBC, Princeton professor Eddie Glaude Jr. stridently denounces Israel's killing of Palestinian children and says blaming Palestinians for their own deaths is like blaming civil rights marchers for state violence meted out against them. pic.twitter.com/Ka9SikxeFx

15 May marked the 70th anniversary of the Palestinian Nakba – or ‘catastrophe’. Nakba acknowledges the forced displacement of Palestinians after the founding of the Israeli state. Thousands of Palestinians have camped on the so-called Israeli-Gaza ‘border’ since 30 March.

But Glaude compared this violence to a pivotal moment in the civil rights movement. In May 1963, thousands of children marched peacefully through Birmingham, Alabama, known as:

one of the most racist cities in the South. Martin Luther King Jr. had described it as a “symbol of hard-core resistance to integration.” Activists had nicknamed it Bombingham, because of the frequency of violent attacks against those fighting the system of segregation.

Protests started on 2 May. Children walked out of school to begin a campaign against segregation and racial injustice:

On the first day of the protest, hundreds of children were arrested. On the second day, Commissioner of Public Safety Bull [Connor] ordered police to threaten the children with police dogs, spray them with powerful water hoses, and hit them with batons.

The violence and arrests continued, but as an eyewitness said:

We didn’t fully comprehend at first what was happening. We were witnessing police violence and brutality Birmingham-style: unfortunately for Bull Connor, so was the rest of the world.

Reports and images of police brutality on peacefully protesting children circulated worldwide, and led to the end of some legalised segregation in Birmingham. However, this didn’t end systemic racism. In September, the Ku Klux Klan – “adamantly opposed to integration of any kind, and their pathological hatred of Blacks [was] as virulent as ever” – bombed the 16th Street Baptist Church, killing four young girls and injuring over 20 others.

In response to the violence in Gaza, Amnesty International’s Philip Luther said:

This is a violation of international standards, in some instances committing what appear to be wilful killings constituting war crimes.

“Burn them”, “shoot them”, “kill them”, the Israelis chanted.

Meanwhile, as Donald Trump congratulated him, Netanyahu astonishingly claimed it was “a great day for peace”.

Glaude is right. There is absolutely no justification for these horrors, or for the bullshit of Israel and its allies.

–  Read more stories about Gaza from The Canary