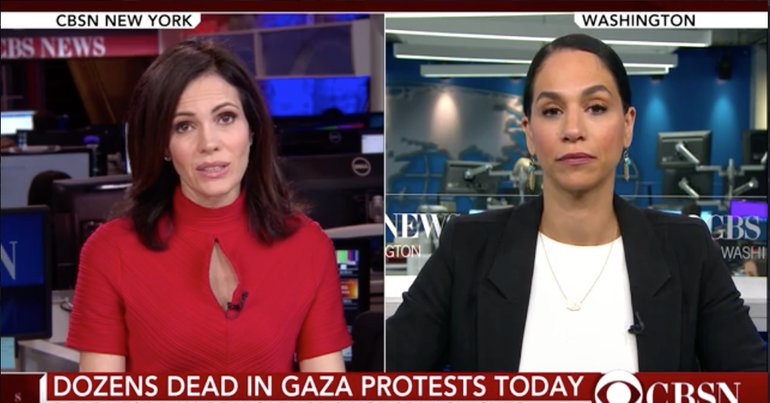 CBS News interviewed human rights attorney Noura Erakat about unfolding events in Gaza. But instead of following the CBS host’s line of questioning, Erakat picked apart the entire premise of the interview. In doing so, she expertly dismantled the Western media’s false narratives on the Gaza massacre.

The CBS News host opens the segment by referring to “clashes” at the “border”. She implies that Palestinian anger at the US decision to move its embassy to Jerusalem was a factor in the killings. Going over to Erakat, the host asks her why Palestinians are “so outraged” about the move. Unwilling to let such misleading statements go uncorrected, Erakat goes to town on the false narratives, saying:

Let’s just start by saying that there isn’t a border… Israel has never declared its borders… So there is no border.

Number two: there were no ‘clashes’ between Palestinians and Israelis, because there’s a buffer zone. So Palestinians who are gathering in order to protest their dispossession and removal (they’re demanding their right to return as refugees) are basically not confronted by any Israeli civilians – not posing harm to any Israeli civilians, to any military installations, or to any Israeli soldiers. So there are no ‘clashes’. This was the lethal use of force against non-violent protesters who did not pose a threat to Israel.

Number three: this isn’t just about the embassy move. Palestinians have been protesting for 70 years demanding their right to return and their right to freedom.

Erakat’s corrections are rarely made in the establishment media space, and they are hugely important. Western media has created the false narrative of an Israel-Palestine conflict: a complex, unending war based on religious/cultural hatred between Jews and Muslims. But it is not a war, or a conflict. It is a 70-year-old illegal occupation by Israel, and a civil rights struggle for Palestinian self-determination, freedom and justice.

The media also consistently refers to Israel’s apartheid wall as if it were a legitimate border between two states. But there is no Palestinian state. There is only Israel, which has confined millions of Palestinians behind its walls in the West Bank and Gaza. The Gaza protesters were assembling inside the prison Israel built around them. Gaza’s 1.9 million inhabitants are trapped behind the apartheid wall, built and manned by the Israeli armed forces.

So far, Israeli snipers have killed 60 Palestinians and shot more than 2,200. Those killed included women, children, elderly people, and journalists. As Amnesty International commented in a statement condemning the massacre:

Early medical reports from Gaza today indicate that dozens of people have been shot in the head or chest. Amnesty International last month documented research from the Gaza Strip that showed the Israeli military were killing and maiming demonstrators who pose no imminent threat to them.

For our media to continue to describe this massacre as ‘border clashes’ is beneath contempt. And it’s important that experts like Noura Erakat use their platform to set the story straight. Because Palestinian lives depend on it.