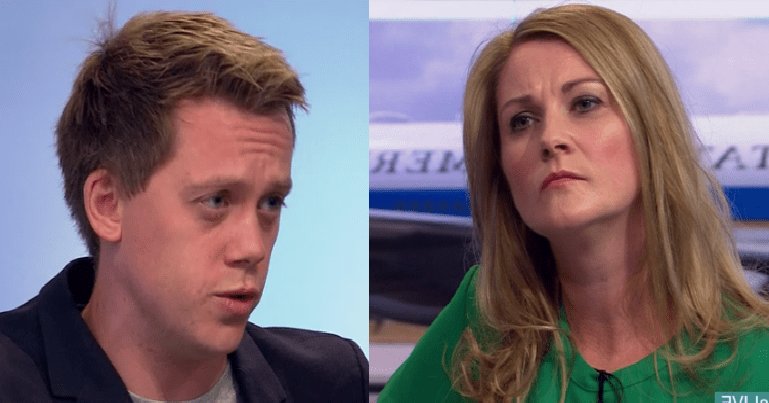 This article was updated at 1245 on 14 July. It originally stated that the host was Victoria Derbyshire. It now correctly states that Chloe Tilley was presenting the Victoria Debyshire show.

On 13 July, Owen Jones destroyed the BBC live on air. The broadcaster had attempted to portray the British as pro-Donald Trump on the Victoria Derbyshire show.

Here's @OwenJones84 taking down BBC ‘impartiality’ live-on-air after it tried to portray the British as pro-Donald Trump #TrumpVisitUK #TrumpProtests pic.twitter.com/Q17MCikjW3

Host Chloe Tilley was reading out tweets supportive of the US president:

I’m struggling to keep up with the number of comments coming in to us from our viewers about Donald Trump’s visit. And there are many people supporting it.

Nicky on email says: ‘I’m really pleased that Trump is here. His visit is a long-awaited one. It’s a shame on the UK that it’s never happened before. All these protesters are wasting their time and their life. They should go home. They’ve got Trump all wrong. Trump is fantastic. He’s going for world peace; he has the courage to speak the truth. I personally love him and his policies…’

He resonates, whether you like it or not, with some people.

I find it baffling just as a BBC editorial decision there. You know what the polling says about Donald Trump in this country? He’s slightly less popular than cholera. He’s one of the most unpopular people on Earth… We’re talking about this country… overwhelmingly, people oppose what Donald Trump stands for and think he’s a misogynist and a racist.

On social media, Jones later followed up on his assertions about the views of the UK public:

I was on the BBC earlier and they read out exclusively pro-Trump tweets and cited them as evidence of Trump's popularity in the UK.

The polling is very clear – Trump is overwhelmingly unpopular here – and the BBC are misleading the public if they suggest anything else. pic.twitter.com/ltaTxYxi0k

And some viewers seemed to agree with Jones:

Earlier in the show, Jones responded to the other guests deflecting from Trump by pointing to Obama’s harsh immigration and drone policies. He said:

You’re absolutely right to talk about the calamities unleashed on this world by successive US presidents: Vietnam, Iraq, Libya for that matter. I marched against Obama repeatedly. I did not see you on those protests, by the way… I was once condemned by Fox News… for challenging Obama’s drone programme…

Jones then hit home why people should oppose Trump:

We get distracted by the theatrics and the performance of Donald Trump… the blaming of migrants, and refugees, and Muslims for all the injustices caused by the powerful. That form of politics is on the march in Britain, in France, in Germany, in Austria, in Italy… and it feels legitimised by Donald Trump. And that’s why we have to protest.

Similarly, Obama distracted people from his oppressive policies with his nice words and slick image. But Trump is emboldening a far-right response to a global economic system in crisis. That’s very dangerous. We must oppose it.