Trump 'comes home' to Scotland, but people make it absolutely clear just how unwelcome he is - Canary 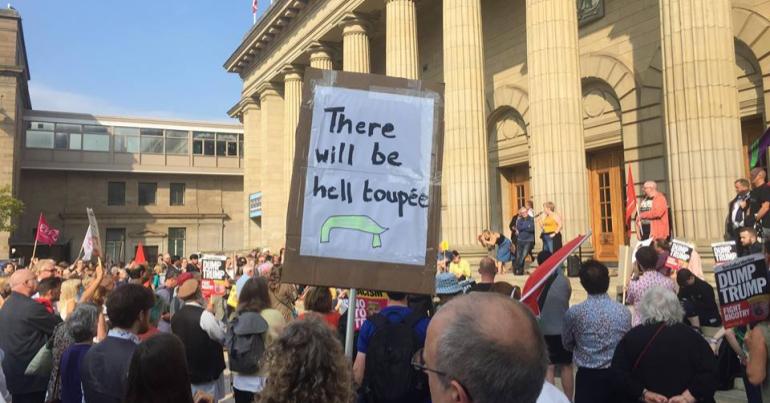 Thousands of people took to the streets of Scotland in anticipation of Donald Trump’s arrival on 13 July, and it’s fair to say they got their message across.

As the mass protests in London were beginning to come to a close, the people of Scotland took over the mantle.

In short, the US president’s visit brought hundreds of thousands out to the streets in opposition across the UK.

The president’s plans for a couple of quiet days in Scotland got off to a tricky start as crowds, joined by several prominent Scottish politicians, gathered in two of the country’s largest cities.

Trump has enjoyed a historically rocky relationship with the people of Scotland, despite telling people he “feels Scottish” back in 2008. Trump’s mother is from the Isle of Lewis, and he owns two golf courses in the country.

After Trump announced his so-called ‘Muslim ban’ in 2017, protesters in Glasgow went viral across the world with their creative slogans opposing Trump. And the 2018 crowds did not disappoint. Hours before the rally kicked off, the signs were already there:

Comedian Janey Godley, who infamously protested Trump’s last visit, was amongst the crowds:

Some claimed ownership of Trump-hating:

There were some topical golfing references:

Others kept it straight to the point:

Before the event kicked off, organisers built a wall of their own inside George Square:

Preparations well underway for Glasgow demo against #Trump. We are building a wall of resistance! Come on down to George Square for 5pm! #naetrump pic.twitter.com/NnTWmuLrNE

And as the event was in full swing, SNP MP Alison Thewliss congratulated the attendees:

A couple of hours north-east from Glasgow, The Canary was in Dundee as hundreds gathered against Trump at the city’s Caird Hall.

An impromptu march followed a series of uplifting speeches, as attendees in good spirits jumped at the chance to stretch their legs.

The sun was shining bright, and the banners were on point:

Trump: People like me here
Dundee: Do they aye?

Some of the placards at today's peaceful protest gathering in Dundee City Square. Hundreds gathered in good spirit. pic.twitter.com/vqJ1eXjA3P

One reworking of the famous Scots saying “we are a’ Jock Tamson’s bairns” (i.e. ‘we’re all equal‘) was a particular highlight:

There were no arrests or flash points to report of, as onlookers shouted words of support.

Although last night’s demonstrations kicked things off, the big march is still to come. On Saturday 14 July, it is estimated that around 10,000 people will march through Scotland’s capital against the US president.

Protesters are also taking to Trump’s Turnberry golf resort, where he reportedly stayed the previous night. Trump is expected to be at the resort on 14 July.

It doesn’t seem like Trump will be able to escape his critics any time soon.

– Join the protests against Trump on 14 July in Edinburgh and Turnberry.