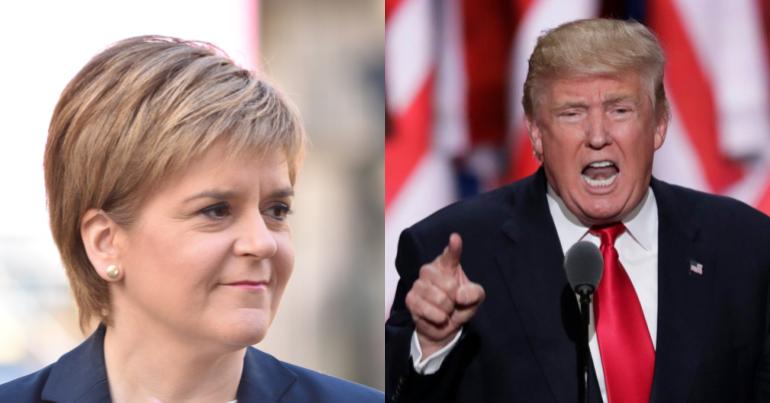 On the same day Donald Trump teed off at his luxury Turnberry golf resort, Nicola Sturgeon sent a powerful message to the world.

Sturgeon led the Glasgow Pride march on 14 July, becoming the only sitting first minister in the UK to have done so.

“Equality and fairness at all times”

I’m proud that Scotland is considered to be one of the most progressive countries in Europe regarding LGBTI equality and Pride Glasgow is a fantastic event that brings communities together and celebrates all that LGBTI people bring to Scottish life.

As a society we must champion equality and fairness at all times and defend the progress that has been made.

Around 50,000 people were expected to line the streets to watch the parade as the city centre came to a standstill for the day:

It’s been a busy week on the streets of Scotland. Thousands gathered in Glasgow and Dundee in a message of hope against Donald Trump on 13 July:

For all the beautiful things about this weekend, knowing that Glasgow's been occupied en masse in the spirit of hope and inclusion against forces of hatred and supremacy is definitely among the most uplifting. This is our city. Fuck Trump, and happy #pride everybody 🌻🌈 pic.twitter.com/ZM8fM7b5H1

The anti-Trump march passed in good spirits. But it’s fair to say the pride parade cranked things up a notch:

As well as being a celebration, Pride is still a day of protest. LGBTQ+ rights have progressed massively over the past few decades in Scotland. But the first minister made it clear that much more needs to be done:

A hard reminder that homophobic hate crime still happens. But it must not be tolerated and it is not who we are as a country. Blair – I applaud your dignity, courage and compassion, and today as Glasgow celebrates #pride let us show that these are the values that define us. https://t.co/e5OG0CzPkH

In Edinburgh, thousands were also marching on 14 July. This was a further protest against Trump’s visit to Scotland:

The president has not received a warm welcome in his mother’s homeland. And it seems there’s no love lost between him and the first minister either.

Reports came out that Trump “hates” Sturgeon on 13 July. An ex-government aide told the Huffington Post that Trump regularly spends time discussing the SNP leader with Theresa May.

Sturgeon has not shown much warmth back to the president, stripping him of his business ambassador status in Scotland and poking fun prior to him landing in the UK.

Whatever continues to go on behind the scenes, the first minister sent a loud and powerful message of defiance today. It seems love really does trump hate.