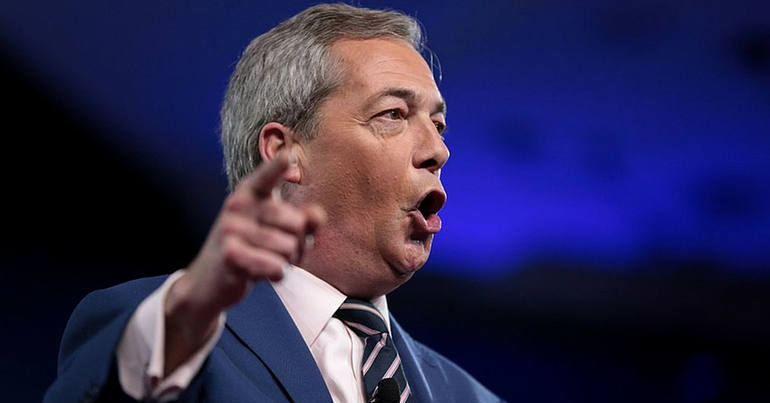 Nigel Farage has apparently been taken in by a picture so crudely photoshopped that one Twitter user said “it may as well have been written in ***** CRAYON!!!”.

But did he apologise for retweeting the racist, misogynistic picture? No. Instead, he attacked the “refugees welcome brigade”.

“These people are sick”

Farage tweeted a photograph of a woman holding a placard reading “My legs are open for refugees”. He commented:

What an insult to the victims of sexual abuse in Cologne and rape in Malmö. These people are sick. 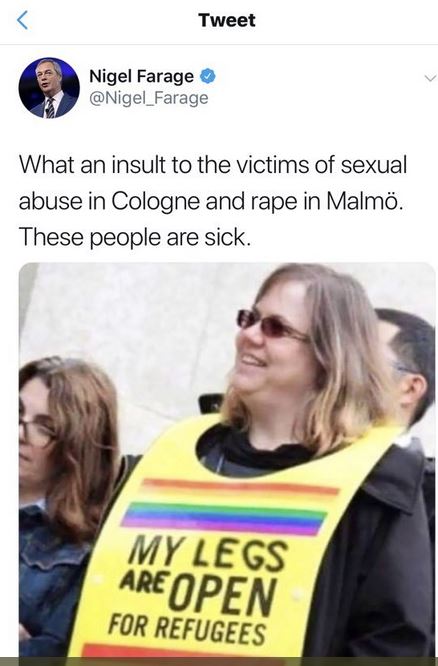 But someone had very crudely altered the words. In the original picture, the woman’s sign read “My door is open for refugees”.

The original image came from a Canadian rally in support of refugees in 2015. Snopes has discredited the doctored one.

At some point, Farage realised his mistake. Undaunted, he deleted his tweet and put up this one:

The photograph turns out to be Fake News, but the refugees welcome brigade need to think harder about what is happening.

He made no apology for his foul retweet. But people on Twitter weren’t going to let him off that lightly:

Nigel Farage asking people to 'think harder' after having shared a racist picture designed to incite hatred that turned out to be false. Are we sure he's not just a Sasha Baron Cohen character joke that's gone on waaaaay too long? https://t.co/9QwqGP1kxt

Holy ***** Nigel!! I've just seen what you did!!!
That's not even good photoshop!!!!! ARE YOU THAT DESPERATE TO SPREAD HATE THAT YOU CAN'T SEE THAT. It may as well have been written in ***** CRAYON!!! pic.twitter.com/qhyXYWFVpm

You posted a fake photo, created by an extremist, that sexualized and attempted to slut-shame a woman for welcoming refugees, and THEY'RE the ones who need to think harder? What the fuck is wrong with you?

He has retracted, but @Nigel_Farage saw this and didn't realise it was fake.
Look at it. Could it be more obvious?
It suits his agenda to discredit the anti #Trump demos, so he used it. Without any thinking at all. #NigelFarage #FakeNews pic.twitter.com/7jGRWppIVv

– Nigel shares an obviously fake photo because he’s a mouth-breathing fucking idiot
– Gets told he’s a fucking idiot
– He deletes it
– He says it’s people who aren’t him who need to “think harder”
– Because, I can’t stress this enough, @Nigel_Farage is really fucking thick pic.twitter.com/6L7c1nPc3X

The fact is, Farage shared a racist, misogynistic – and very obviously photoshopped – image. As he threatens a return to politics if Brexit doesn’t go his way, the ex-UKIP leader has just given people a timely reminder of what an unpleasant man he really is.