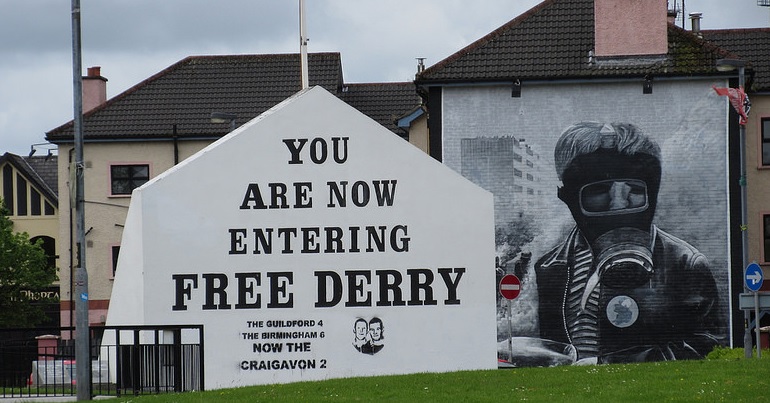 The Fountain estate in a loyalist enclave in Derry city has recently been under petrol bomb attack by republican youths from the nearby Bogside. The media reports that the so-called ‘New IRA’ is behind it. But there’s something most of the media aren’t telling you.

While the media highlights condemnation of the attacks, it largely doesn’t ask why they occurred. But journalist and native of Derry Eamonn McCann speaks to the republican Derry youth on a regular basis, and has spoken out about the issue.

The media often focuses on gestures, like handshaking between republicans and members of the royal family, in its reporting on loyalist/republican relations. McCann, however, believes such gestures serve only to engender a “degree of cynicism” among young working class people.

Better community relations in Northern Ireland have come as a result of the Good Friday Agreement (GFA) which has been in place since 1998. But when young working class people are asked about the GFA, McCann says they respond:

what the F did we get out of it?

Some experts believe that it is primarily the middle class which has benefited from the GFA. And a University of Ulster survey in 2014 revealed that republican and loyalist areas most affected by the Troubles not only saw no life improvements as a result of the GFA, but many saw their life prospects worsen.

The Bogside in Derry is located in the Foyle region. It is reported to have among the highest unemployment rates in the UK. It was one of five socially deprived areas in Northern Ireland selected for a £45m investment project in 2016 due to its high unemployment level. Worse still, Northern Ireland is suffering a suicide epidemic with rates rising faster than in the rest of the UK.

frustrated with the lack of provisions and investment coupled with witnessing overtly sectarian and political policing of our communities.

The GFA brought a welcome end to violence, but it brought little else to working class people. The areas that suffered most during the conflict continue to suffer today as a result of social deprivation. It appears Derry is now, in part, facing the fallout of that.