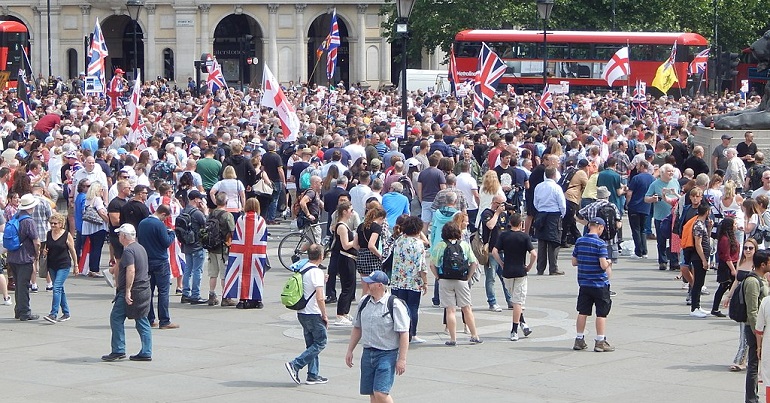 On 14 July, supporters of the English Defence League’s (EDL) ex-leader Tommy Robinson staged a protest in London. The protest also had a pro-Trump message. It is estimated that around 2,000 people took part.

But one of Robinson’s supporters didn’t appear convinced by estimates from news outlets. Taking to Twitter, they claimed the protest was bigger than an anti-Trump demonstration held the previous day. That protest was attended by up to 250,000 people.

Alongside their claim, they posted this image:

But the photo wasn’t taken at the pro-Tommy Robinson march. It wasn’t even a photo of London. In fact, the photo is of Tahrir Square in Cairo, Egypt.

So people took to Twitter to point out the obvious. They did so by mocking the original tweet and sharing fake photos of their own:

Here's one from another angle, with London's post office tower in the background. pic.twitter.com/CQp9339IPu

The Tommeh fans even had a massive tent with bands and music and stuff. pic.twitter.com/5dfMTSxBZk

This isn’t the first time supporters of Robinson have spread fake photos of their rallies. In June, another Twitter user posted a photo of what they claimed was a pro-Robinson march:

Once again, it turned out the photo was of an entirely different event. This time, it was a photo of Liverpool FC fans celebrating their team’s Champions League victory.

Robinson supporters aren’t dropping their habit of spreading fake images to inflate the size of their protests. But people are seeing through them, and they won’t stop exposing them either.