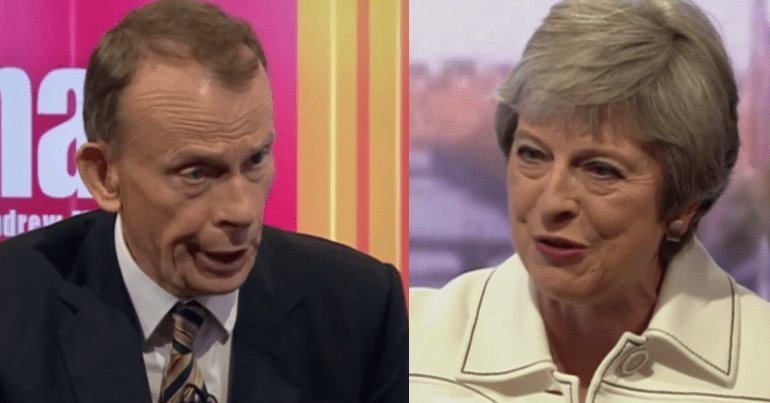 Andrew Marr didn’t even mention the disaster that hit Theresa May right before her interview on 15 July. After three resignations earlier in the week, yet another minister resigned from May’s government.

The Mirror effectively forced Andrew Griffiths to resign after the paper revealed that the business minister sent two barmaids £700 while offering sex and demanding explicit images. Now May has had 15 ministerial resignations since the 2017 general election.

But Marr didn’t ask the prime minister about what happened:

Andrew Marr, who is paid £400,000 a year to interview politicians, did not ask the prime minister a single question about her business minister just resigning from her government #marr

There was also no discussion of the latest resignation on Marr’s newspaper review. Griffiths told the Mirror he was “deeply shamed” following the revelations. The media outlet reported that he made “perverted demands” in over 2,000 texts to the barmaids. The married MP for Burton boasted about being politically powerful and asked if a girl could “take a beating” in one message. He also said:

I do not seek to excuse my behaviour and will be seeking professional help to ensure it never happens again.

Marr spent most the interview questioning May on her Brexit deal. The prime minister failed to offer any clarity. She denied concerns about her Chequers deal, saying:

That’s wrong, it does allow us to do new trade deals around the rest of the world

Marr also did not mention that the EU parliament has already rejected May’s Brexit white paper. The Brexit Steering Group said it would veto May’s plan unless she came up with a “credible” solution to the Irish border and stopped trying to split up the fundamental freedoms of the single market. These issues suggest that May’s Brexit plan is intrinsically unworkable.

The Andrew Marr Show editor Rob Barley responded to concerns about the interview:

We thought the massively important subject of Brexit was most important thing to do in limited time. And why you mention salary is beyond me.

But imagine if Jeremy Corbyn was hit by a high-profile resignation right before a major interview. The notion that the BBC wouldn’t ask him about it is absurd.

Adam Bienkov, editor of Business Insider, suggests Marr’s £400,000 salary should make him more incentivised to grill the prime minister. But the Conservative government sets the BBC’s license fee level. So while the government does not set Marr’s remuneration level, the root of his paycheck is Conservative-controlled.

That is one of the structural problems that inhibits the BBC’s political reporting. When David Cameron came to power in 2010, he cut the BBC’s funding. The government can use funding cuts to exert political pressure on the BBC.

Another major issue is that some high-profile positions in the BBC are government appointees. The Conservatives are naturally going to appoint people who conform to their political worldview. Such as the current BBC chairman David Clementi, who was chairman of Virgin Money.

These are the fundamental issues we need to tackle in order to make the BBC into a force for the public, rather than a propaganda network for the establishment. The latest example of such propaganda is Marr not even mentioning May’s fourth ministerial resignation in a week.

We need to democratise the BBC, pronto.

– Join The Canary, so we can keep holding the powerful to account. Also, read and support other independent media outlets: