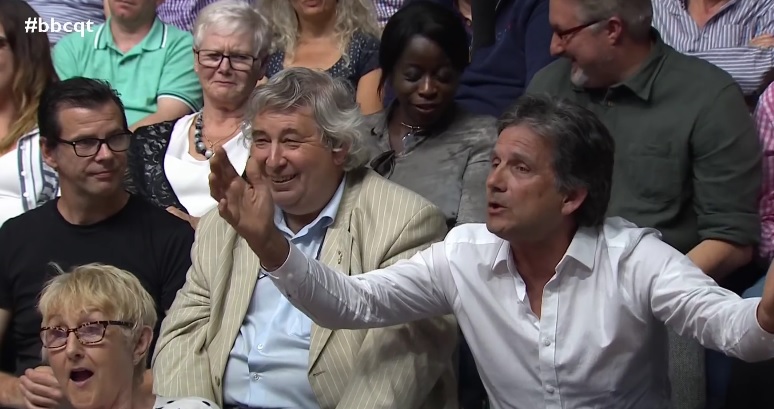 ‘Spot the Tory plant’ is a game many people play when watching BBC Question Time. And it didn’t take the public very long to identify the Tory in the audience on 5 July. In fact, he blew his own cover within seconds of opening his mouth.

As is the case with most episodes of Question Time, Brexit dominated the debate. Disgraced ex-minister Priti Patel was on the panel, who argued that we should be “much more positive” about leaving the EU. Fellow panellist Ian Blackford challenged Patel on that. The SNP MP raised his concerns over the UK’s economic prospects after Brexit.

Quickly, however, an audience member jumped to Patel’s defence. He accused Blackford of talking “such negative nonsense” and said of the Brexit summit at Chequers on 6 July:

There’s a meeting tomorrow in cabinet, things will be sorted… some sort of compromise will have to ensue, and it will. You wait until tomorrow evening, it will all be agreed… Priti is talking a lot of sense.

Laughter broke out in the audience at the notion that “things will be sorted” during the meeting at Chequers. Because Tory infighting is rife in the Brexit talks. Clearly, the audience sussed that something was up.

They were right. As people on Twitter quickly discovered, this audience member has a very special connection to the Conservative Party and the Brexiteers:

Andrew Livsey was a Conservative candidate in the 2017 general election. He stood against Labour’s Angela Eagle in Wallasey. He lost the race by a significant margin. According to the Mirror, he also appeared on both Blind Date and the Crystal Maze. And he apparently once stood for a council by-election where he attempted to attract votes by saying he’d won a Porsche in a competition. Whoop-dee-bloody-doo.

Livsey also asked a question on the programme:

After 70 years, the NHS is now a sacred cow. Isn’t it time for serious reform now?

Probed by the show’s host David Dimbleby – because we hadn’t heard enough from him already – Livsey went on to explain what sort of “reform” he had in mind for our “sacred cow”:

we need to sort of get in there and sort out the waste, and all the money that’s just wasted generally, and the way [the] whole thing is run; it’s over-managed…

Except that a royal commission – a committee set up to investigate a matter of public concern – would mean throwing further public money at a problem we already know the answer to.

Tory plant in #bbcqt audience says #NHS is in need of “serious reform” and refers to it as a “sacred cow”. You’d almost think he’d never heard of Andrew Lansley and the Health & Social Care Act, brought in by Tories, propped up by #LibDems

Contrary to Livsey’s assertion, the waste of money isn’t the NHS’s problem, it’s the lack of money. And as Labour’s Lisa Nandy pointed out on Question Time, it’s also the “stranglehold of private companies who are bleeding money out of our National Health Service”. Furthermore, one of the biggest obstacles to the health of our NHS is a government that appears hellbent on destroying it. One audience member summed that up perfectly:

This woman is absolutely right… "It's because of an ideologically-led assault by [the Tory Govt] that is trying to dismantle the NHS" #bbcqt #NHS70 pic.twitter.com/MzZFiLK0nc

We already know what the NHS needs to flourish. What we certainly don’t need is some Tory on Question Time parroting the Conservative Party line on issues like the NHS and Brexit. But unfortunately, that’s what these Tories keep subjecting us to.

You can watch the full show here:

– Check out the new NHS song by the National Health Singers. It marks the health service’s 70th birthday and tells the government in no uncertain terms that we Won’t Let Go of our national treasure.