Revealed: the DWP drove through a controversial welfare reform off the back of some very scant evidence - Canary

The Department for Work and Pensions (DWP) just quietly revealed that it had scant evidence to support a controversial change to the benefits system. Moreover, it’s only just published this information – 21 months after it changed the policy.

People claiming Jobseeker’s Allowance (JSA) and work-related Universal Credit have to have fortnightly reviews of their job-searching activity with a DWP work coach. After the DWP conducted a trial, it changed the policy in October 2016. It meant all JSA “legacy” claimants (that is, those who would move onto Universal Credit) and new Universal Credit claimants would have a weekly review for the first 13 weeks of their claim. The DWP has now published the results of the trial.

The trial involved [pdf, p5] 22,542 people who went onto benefits between 22 September 2014 and 24 February 2015. People were randomly [pdf, p5] either put on fortnightly or weekly work-search reviews. The DWP then followed the claimants’ progress for a year after their claim began.

The DWP said [pdf, pp7-8] the results of the trial were generally ‘statistically significant’. They were – but only just. In terms of actual numbers, the results didn’t amount to much.

The trial compared people on weekly work-search reviews to those on fortnightly ones. It looked at two variables: how many people came off benefits and how many found employment. The DWP found [pdf, p7] that, after 90 days, the number of people no longer claiming benefits was 3 percentage points higher for those on weekly work-search reviews than those on fortnightly ones.

After 180 days, this dropped to between 1 and 1.5 percentage points. The DWP admitted [pdf, p7] that the figure only stayed “on the edge of significance” for the remainder of that year.

The DWP also included [pdf, p6] the actual result of how many people came off benefits. The difference is minimal with the rate people drop off benefits being nearly identical: 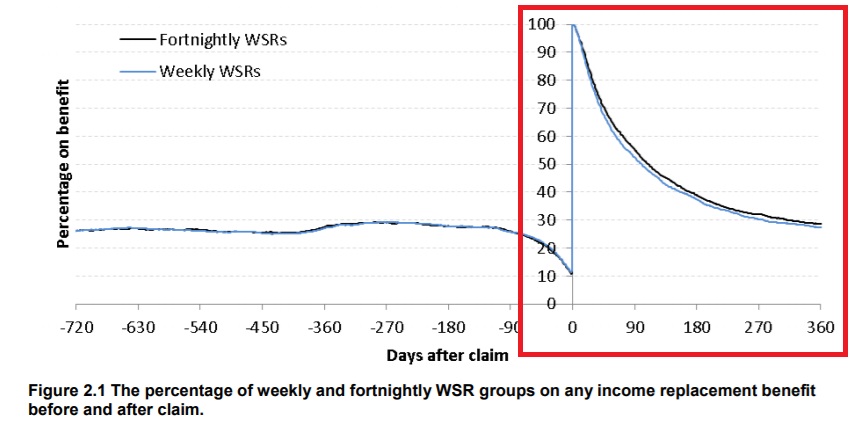 It also compared the two groups in terms of being in employment after the trial. The DWP found [pdf, p8] that the number of people in work who had weekly work search reviews was, at best, 2 percentage points higher than the fortnightly group.

Overall, the DWP tried to calculate the difference in people coming off benefits, and moving into work, in terms of number of days for weekly search claimants. It found that its “best estimate” was that with weekly work-search reviews, people spent 6.4 fewer days on benefits and 7.3 more days in work. But the “confidence intervals” (that is, the DWP’s upper and lower estimates) were large:

The DWP also tried [pdf, pp11-14] to work out whether it could target specific groups of claimants for weekly work-search reviews (“segmentation”). It used various models to see whether the weekly searches made any difference to specific groups. But it concluded [pdf, p14]:

None of the schemes seems to be a significant improvement… in terms of either days off benefit or extra days in work; although comparison with random assignments suggests that the segmentation would reduce days on benefit in 88 per cent of cases. The model does appear to make a modest improvement over random assignment, but there is no strong evidence that it works well.

All of this was seemingly irrelevant to the DWP, as it pushed ahead with the policy regardless.

But it not only rolled the policy out, ignoring the weak evidence – it also instructed its staff to extend the weekly reviews even further.

The DWP claims that JSA legacy and Universal Credit claimants have “weekly work search reviews for the first 13 weeks of their claim”. But its response to a Freedom of Information request (FOI) shows that actually, under Universal Credit, the DWP sets a target for staff regarding the number of claimants on weekly work-search reviews. It said [pdf, p9] in the FOI response:

At least 50% of Universal Credit claimants will receive the additional support of weekly Work Search Reviews which will be set at the discretion of the Work Coach. At each Work Search Review, consideration is given to whether Weekly WSR remains appropriate or whether the claimant is to revert to fortnightly Jobsearch/Work Search Reviews, provided the 50% ratio is maintained overall

The changes do probably save the department some money, if the cost of administering weekly reviews is not outweighed by the saving in benefit payments.

And the DWP told The Canary:

As the report makes clear, weekly work search reviews make a real difference to people in the initial weeks of their claim. That’s why we rolled out the more frequent reviews for all claimants for the first thirteen weeks. After that point, work coaches tailor the frequency depending on people’s circumstances.

The changes that weekly work-search reviews make could be viewed as small but significant. But what effect are they having on claimants’ lives?

A person on the frontline says…

The DWP’s report has left writer and activist Charlotte Hughes unimpressed. She told The Canary:

Weekly work search reviews put immense stress upon any claimant, regardless of age, sex or disability. Attending a Jobcentre for a weekly work search review is a stressful event, even more so for a person that lives with mental health issues. They feel that they are being judged for not performing their job search correctly, or the DWP is forcing them to attend endless courses.

Often greeted by a G4S security guard at the front desk, this is the start of the DWP’s hostile environment. This continues inside the Jobcentre. No mobile phones are allowed, no food and no drinks. Often no access to a toilet or lift is provided. All this combined makes attending a weekly appointment a complete nightmare. Everyone that I speak to wants to find work. But the DWP actively prevents this by forcing them to attend weekly appointments and courses that actually stop active job searching. Financially it can, and does, leave people destitute. Often they walk miles to their nearest Jobcentre, only to be told that their efforts aren’t good enough or they must do more.

The government have created the perfect hostile environment inside Jobcentres, and attending weekly is far too much for many to cope with. Some take themselves off the system, some commit suicide because they feel that they are being persecuted – and the reality is that they are.

The most hostile of environments

In a week which has seen Esther McVey under increasing pressure to resign, the revelation that the DWP changed a policy without substantial evidence may seem unsurprising. This cavalier attitude to systems affecting millions of people is endemic of the department’s approach more broadly – an approach which is dogmatic and arrogant.

– Support Disabled People Against Cuts and read and support Hughes’s blog, The Poor Side of Life.