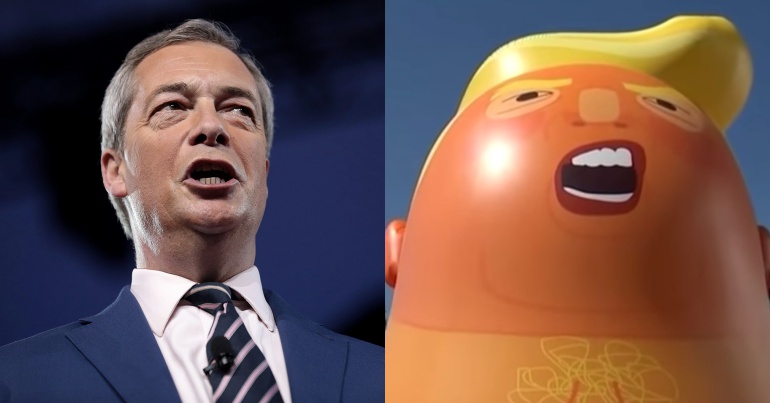 A crowdfunding campaign successfully raised over £22,000 to fly a six-foot-high ‘baby Trump’ blimp over London when Donald Trump visits the UK. On 5 July, London’s mayor Sadiq Khan gave permission for the blimp to fly “close” to parliament on Friday 13 July. And Nigel Farage really isn’t happy about this.

Lots of people disagree and think the blimp is the perfect response to Trump’s visit. They’ve taken to social media to tell him this.

Over 157,000 people have expressed interest in a major protest against Trump’s visit. So there’s a lot of support for the ‘baby Trump’ blimp. But Farage is really quite upset:

Sadiq Khan has allowed an inflatable “Trump baby” blimp to fly in London. This is the biggest insult to a sitting US President ever. https://t.co/4IRVlG7Gz6

Sorry, Nigey, but lots of people think the blimp is just perfect.

As the blimp’s creators said, the blimp is actually meant to be an insult:

This British guy who looks kind of like a frog, whoever he is, is very very smart. I am the BIGGEST and GREATEST insult to a sitting US President ever, there has never been a better or more talented insult than me. Thank you! https://t.co/XqRp6QlQ7z

According to Leo Murray, creating the blimp was “a vital civic duty”:

I wrote a thing about the conception and birth of @TrumpBabyUK and why being rude to visiting fascists is not some sort of faux pas but a vital civic dutyhttps://t.co/bHYrJSW3k8

To really get through to Trump, you have to get down on his level and talk to him in a language he understands: personal insults.

And lots of people – including Labour MP David Lammy – agreed:

For a US President who retweets far-right Britain First propaganda, insults Londoners at times of tragedy, and refuses to condemn white supremacist marches at home, this insult is well deserved #StopTrump https://t.co/argb5z9TBo

The sitting US President is the biggest insult to the world ever, so it's a rather measured response.

Others, meanwhile, pointed out the similarities between Farage and Trump:

Perhaps it should fly alongside one these? Both of you have the same sick attitude towards immigrants! pic.twitter.com/JG5rMZFPqM

Some suggested that Farage really should listen to the “will of the people”:

But let’s not forget that Farage isn’t afraid to insult US presidents either. In 2016, he called Barack Obama a “loathsome creature”.

A spokesperson for Sadiq Khan said:

The Mayor supports the right to peaceful protest and understands that this can take many different forms. His city operations team have met with the organizers and have given them permission to use Parliament Square Garden as a grounding point for the blimp.

The protests against Trump do pose other questions. As some people have noticed, Khan failed to speak out when Saudi Arabia‘s crown prince Mohammed bin Salman came to London:

Nothing from Sadiq Khan when the Saudi Prince visited in March this year. Chemical attacks in Yemen, appalling human rights and killing homosexuals. It's fashionable to hate Trump and will probably get him another run at Mayor.

Thousands will protest against Trump on 13 July. And because it also upset Farage, it’s likely that the Baby Trump blimp will get an even bigger cheer when it flies.