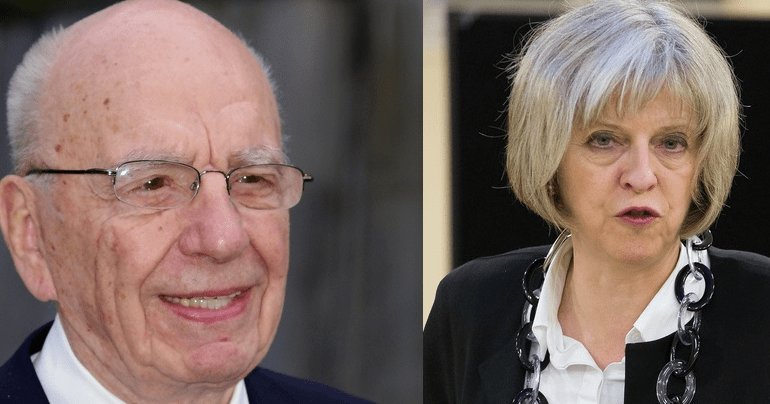 Many people are now convinced that Rupert Murdoch, owner of the Sun, has Theresa May in his pocket. A camera caught Sun editor-in-chief Tony Gallagher approaching Downing Street on 5 July, the night before a Brexit showdown between the prime minister and her MPs.

On the evening of 6 July, May met her cabinet ministers in the hope of finally reaching an agreement about the UK’s future relationship with the EU. The prime minister reportedly confiscated their phones to stop government ministers leaking information to the press.

But some people reckon May is also facing pressure from elsewhere:

Johnson and Gove are two of Murdoch's men in May's cabinet.
She is too weak to sack them without Murdoch's say-so.
Tonight Murdoch's minion, the editor of the S*n, is in talks with the PM at no. 10.
What undemocratic madness is this? https://t.co/8MhHs425iW

News Corp, which owns the Sun, has previously enjoyed “astounding access” to senior figures in the Conservative government. The tabloid is also one of the leading voices for Brexit.

Representatives of News Corp are reportedly more likely to visit No. 10 than any other company. Senior executives from Murdoch-owned companies met either the Conservative prime minister or chancellor ten times in the year up until September 2016. And more broadly, News Corp executives met senior government representatives 20 times between April 2015 and September 2016. This list, examined by 38 Degrees and the Media Reform Coalition at Goldsmiths University, does not include government meetings with journalists who work at Murdoch-owned newspapers.

With such a backdrop, the photo of editor Gallagher at No. 10 has heightened suspicions:

Sure sign the Tories are planning a Brexit of lies, bigotry and against the interests of working people, when they invite the editor of The S*n for tea – the day before Cabinet showdown at Chequers. https://t.co/TxjvbKSOvu

At the eight-hour meeting with cabinet ministers, May was expected to argue for a close relationship with the EU on goods, while drawing up a more distant one for services.

But an already rocky ship may have taken another bad turn for the Conservative leader.

Brexit secretary David Davis has written to the prime minister stating that her plan is “unworkable”. And EU officials immediately said that May’s new plans would be “dead on arrival”, because they mess with the core rules of the EU single market. Governments cannot split up the four fundamental freedoms; they must place goods, services, labour, and capital on the same unregulated playing field.

One Brussels source told the Independent:

But another powerful force could hold sway over May’s Brexit negotiations. Namely, Murdoch and his media empire:

These are the people @theresa_may means when she talks about obeying 'the will of the people'. The people who keep her in power and ultimately control her!

In 2014, the Media Reform Coalition reported that Rupert Murdoch’s News UK controls a third of our national newspapers – 70% of which are under the control of just three companies. Such a corporate monopoly means that media moguls can run amok over British democracy. Politicians can be held to ransom. And if they don’t deliver favourable policies for Murdoch and other press barons, they’ll be treated awfully by publications that reach millions of voters.

So no wonder people are suspicious about the photo of the Sun‘s editor at Downing Street. They are worried about the power media conglomerates have over our politics.

On the other side of our two-party system, meanwhile, Jeremy Corbyn has proposed breaking up media monopolies. And what’s for certain is that a healthy democracy depends on a media free from vested interest. Especially when it comes to crucial issues like Brexit.