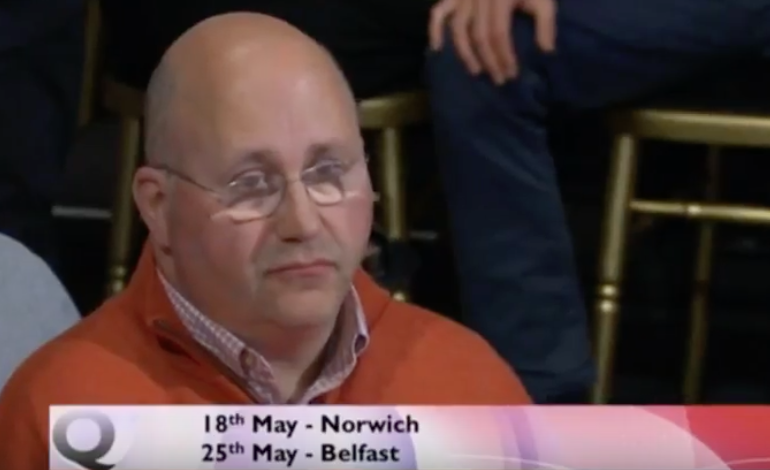 On the 11 May episode of BBC Question Time, an audience member gained wide attention for raising fears of returning Labour to power in the 8 June election. But it turns out the guest wasn’t a regular voter. He is sitting Conservative councillor Eric Holford.

Scottish Conservative Eric Holford is a sitting councillor for Clydesdale East on South Lanarkshire Council. Holford has shared controversial views on population control on Facebook in the past. Going so far as to state that the NHS and the invention of lifesaving drugs have been negative for humanity overall. 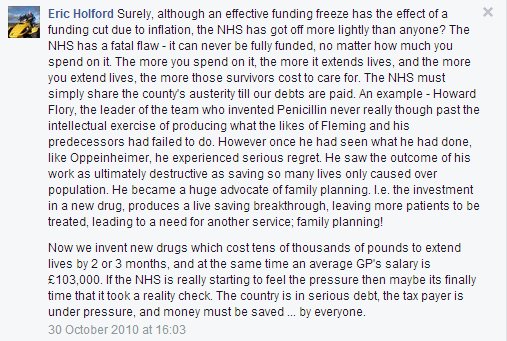 On 11 May, he was presented as a voice of the people on BBC Question Time, as if he was just another audience member. Just one minute into the show, Holford is granted the first question. No mention is made of his background. He asks:

Is the leaked Labour manifesto an attempt to drag Britain back to the nightmare that was the 70s?

This is the central attack of the Conservative Party’s campaign against Labour’s draft manifesto, and parallel attacks by conservative media outlets such as The Daily Mail. After the panel’s answers, Holford simply continues the narrative:

I remember the winter of discontent. I remember the three-day weeks, the power strikes… all of these things. And I don’t want to see us go back into that.

It’s a Tory government that brought us out of that and gave us a strong economy.

Another audience member interjected to say that things are also bad today, having swung “too far” in the other direction. This triggered a row in which Holford again defended the government’s economic record, despite nurses requiring food banks to eat.

The BBC granted the Conservative Party priceless advertising, entirely for free. And the audience at home were left feeling Holford was just an ordinary voter like them.

This is not the first time the BBC has failed to provide important information about the background of supposedly independent guests. On 21 February, BBC Newsnight featured a segment on the NHS in which cancer specialist Dr Karol Sikora called the health service “the last bastion of communism”.

Sikora is the Medical Director of private health firm Proton Partners Ltd, based in the tax haven of the Bahamas. He took part in a series of anti-NHS attack ads for the US Republican Party aimed at killing off President Obama’s healthcare plans. In the videos, it is claimed that NHS rationing boards routinely deny life-saving care to vulnerable British patients.

Sikora also has links with the Prince Charles Foundation for Integrated Medicine (FIM). The foundation promoted the Prince’s somewhat left-field views on alternative medicine. And Sikora has been accused of exploiting the vulnerability of desperately ill people in order to promote expensive bogus therapies like homeopathy. Ultimately, FIM was shut down after its finance director stole more than £250,000 from the charity. But the scheme was reborn as the College of Medicine just months later.

Imperial College London also took legal advice after Sikora made repeated public claims that he holds an honorary professorship at the prestigious institution. He does not.

Sikora has a right to his opinion. And yes, BBC Newsnight is right to share differing views on the issues. But what is critical is that we know the background of the person sharing those views, and if they have arrived at their view objectively.

In the cases of both Sikora and Holford, the BBC granted them a platform to lobby for their personal financial and political interests. And the viewer was left none the wiser.