Theresa May's LBC interview was nothing short of nonsense. So we've corrected it for her [VIDEO] - The Canary 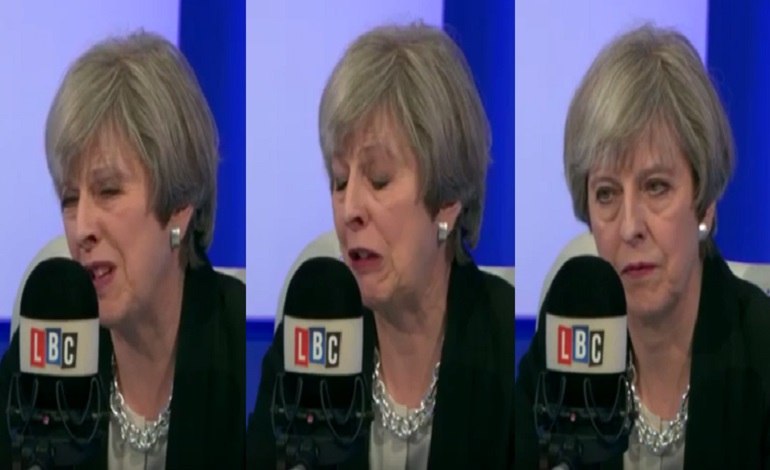 On Thursday 11 May, Theresa May took part in a live phone-in on LBC. For just under half an hour, members of the public and host Nick Ferrari fired questions at the PM. And her answers largely came across as nothing short of nonsense. So we’ve broken it down.

May’s appearance was the first in the LBC Leaders Live series. And it began with a question from ‘Sophia’. She asked about what the PM had done to help children with families. May reeled off various policies the Tories had put into place, like 30 hours free childcare for four and five-year-olds and an increase in the personal tax allowance. But Sophia wasn’t happy with May’s answers. And she fired back at the PM with a damning criticism of the lack of help for ‘just managing’ families. Here is May’s response:

The PM then went on to talk about mental health:

But despite what May claims her party would do in future, here’s what the Conservatives have done so far in practice:

Aside from this, Ferrari repeatedly asked May if her party would be raising taxes in the next parliament. But the PM swerved the question, only saying her party has “no plans” to increase tax, not confirming that it wouldn’t do so:

May then had a question from ‘Romina’, from Leeds. She has been a paediatrician for 12 years, and she says she’s thinking of quitting the NHS because it is “under-staffed” and “overstretched”, which threatens ‘safe care for patients’. And because of the “crippling front line staff shortages, which have worsened as a result of the government’s failure to invest properly in the NHS”. May answered:

The £10bn “extra” that May quotes in her answer has been shown as false. Five MPs, including one of May’s own – Dr Sarah Wollaston, wrote to Chancellor Philip Hammond last year saying the £10bn figure is:

not only incorrect but risks giving a false impression that the NHS is awash with cash.

Also, while May claims to want to invest more in social care, her party has cut an estimated £4.6bn from these budgets since 2010.

Romina hit back at May’s response:

May on the ropes

And judging by the PM’s facial expression, she didn’t seem to think much of the next caller’s question either:

She was then questioned on immigration, and responded with little argument other than that she wants to “control our borders” and “Jeremy Corbyn doesn’t”. And in response to an emailed question from Steven over cuts to the armed forces, May said there are about “79,500” soldiers in the army. Which, as Ferrari pointed out, was a break of a Conservative manifesto pledge from the last election.

May’s performance on LBC appeared to show a PM who is not at all ‘strong and stable’. She stumbled over some of her answers, used incorrect figures at times, and responded to members of the public with more spin than a washing machine on a 90 degree cycle. But no mind, at least her husband Phillip knows what his duties are: