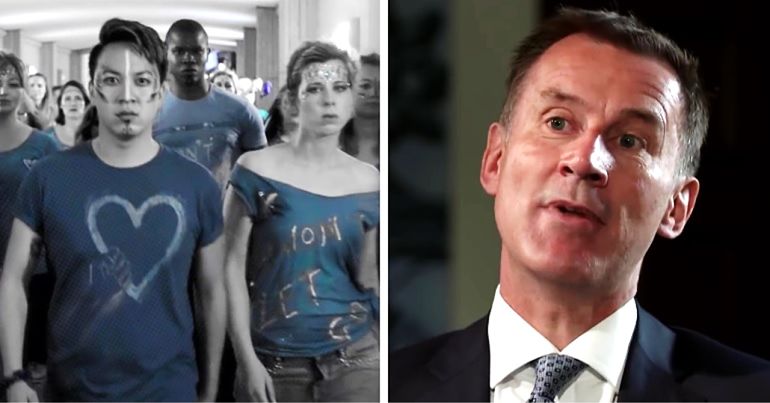 A must-hear song is about to hit the UK charts. And it’s one that health secretary Jeremy Hunt probably doesn’t want rising to the top. Because the song contains a very pointed message to him and his government.

Released as the NHS turns 70, and performed by NHS workers, the single expresses what most Britons think about our national treasure: that we Won’t Let Go of it, ever. No matter what skullduggery the government employs to persuade us that’s ‘for the best’.

Join in the fight

The National Health Singers perform Won’t Let Go. The group is a choir of doctors, nurses, healthcare workers and public supporters of the NHS. It’s aiming for the song to enter the charts just after the NHS’s 70th birthday on 5 July.

The Voice‘s Mark De Lisser created the track with the choir, alongside songwriter Clare Dove and producer Samuel Cramer. William Walsh made the video for it and Victoria Watson provided the featured artwork.

As the group says, Won’t Let Go is a song it wants everyone “singing from the rooftops”. That wish may well come true because the track has some fiery lyrics people will struggle to resist joining in with. Such as [1.12]:

Every time we speak up, they don’t want to hear us, try to make us quiet… We’ve got to get louder, make them know we’re proud of everything we stand for…

It also has a very catchy beat that will no doubt get people’s feet moving too, just like the NHS staff themselves. In the video, the choir dances in front of parliament while singing the protest song, leaving no doubt over who it’s aiming at.

Alongside the song, the choir is running an #NHSbigblueheart campaign. It’s posting pictures of people ‘wearing’ the hearts to highlight support for the NHS:

The fabulous @sally_lindsay supporting out #NHSbigblueheart campaign. Marching together for NHS survival. Sing with us!! We say NO to austerity cuts, NO to privatisation #NHSwontletgo #NHS70 #OurNHS70 #NHSmarch pic.twitter.com/1EE2vShJ6E

Campaigning alongside the marvellous @JonAshworth at the #NHS70 march with our #NHSbigblueheart. We say NO to privatisation of the NHS! No more cuts. We WON’T LET GO #NHSwontletgo #OurNHS70 pic.twitter.com/D4HGEnLK93

In short, the National Health Singers are making a tremendous effort as the NHS turns 70 – not only to celebrate it, but also to raise awareness of the risks our health service faces.

Since the Conservatives came to power in 2010, they have systematically – and some would say intentionally – brought the NHS to its knees. The Conservative-led government introduced legislation in 2012 that has allowed private companies to scoop up the most profitable parts of our health system – and be paid for it handsomely with our taxes. Of course, that profit goes into some fat cat’s wallet, rather than back into the health system.

Meanwhile, the Conservatives have starved the NHS of adequate funds, forcing numerous trusts into financial trouble which, conveniently for private providers, makes the NHS unable to stump up competitive bids on service contracts. In fact, it’s seemingly struggling to provide some services at all. Recently, the NHS revealed it’s considering axing 17 procedures, such as tonsil removal, from its services except in certain cases.

To this point, Britons have generally believed that no government would dare take away universal healthcare. It’s now abundantly clear that this belief may be mistaken. That’s why the National Health Singers need everyone to sing loud and clear: we Won’t Let Go of our NHS.