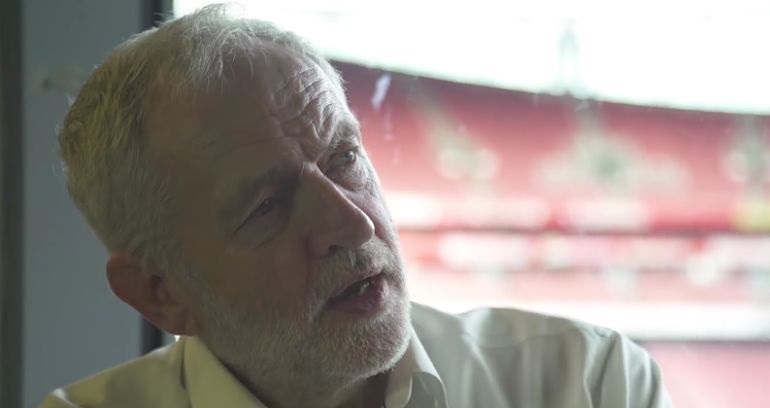 A journalist tried to use the England match at the World Cup to smear Jeremy Corbyn on 3 July. But it backfired spectacularly.

Journalist Helen Lewis, who’s also the New Statesman‘s deputy editor, criticised Corbyn for tweeting out support for the team ahead of its game with Colombia. Because, Lewis revealed, the Labour leader backed a motion against “jingoism and nationalism” in football reporting almost 20 years ago.

As many commentators pointed out though, Corbyn had good reason to criticise the media’s coverage at that point in history. The same, however, isn’t true of Lewis’s shoddy criticism of the Labour leader.

The England team faced Colombia at the World Cup on 3 July. Prior to the match, Corbyn tweeted:

I hope bosses are flexible with the millions of evening workers who want to watch England take on Colombia.

Hoping for the first win in a knockout round in 12 years. #ENGCOLhttps://t.co/8gPspbIJ1U

But for Lewis, this display of support for the England team, and workers, appeared to amount to gross hypocrisy from the Labour leader. So she too took to Twitter:

Lewis reposted Corbyn’s tweet with a screengrab of an Early Day Motion from 1996. Then Garston MP Eddie Loyden, who spoke up for football fans involved in the Hillsborough disaster, sponsored it. The motion, which Corbyn supported, asserted:

That this House, while welcoming the success of England’s football team in the European 1996 Championships, deplores the jingoism and nationalism in the pages of sections of the tabloid press which does nothing to maintain the true spirit of sport, but is reminiscent of Hitler’s use of sport to enhance his [sic] evel regime in the 1930s.

The New Statesman‘s deputy editor appeared to see this as a complete turnaround for Corbyn: from a man who branded football-supporting media outlets as Nazis, to one who ‘buries himself in the St George flag’. And she claimed that this change of heart is because he “REALLY wants to win the next general election”.

As commentators pointed out, however, some media outlets did splash “jingoism and nationalism” on their front pages in 1996:

Meanwhile, the Sun ran with the headline “Let’s Blitz Fritz”. And the Daily Star bellowed “Herr We Go, Bring on the Krauts”. These outlets framed their coverage of a game between England and Germany with text and images reminiscent of World War II. Following an England loss, riots erupted in the UK. At the time, parliament’s National Heritage Committee said it:

has decided to express its disgust at the xenophobic, chauvinistic and jingoistic gutter journalism perpetrated by those newspapers which may well have had its effect in stimulating the deplorable riots following the Germany victory in the semi-final.

Clearly, Corbyn was not alone in his opposition to this jingoistic reporting. And regardless, opposing that sort of reporting bears little relevance to supporting England in the 2018 World Cup.

Could you please explain in what way critiquing specific forms of nationalistic populist journalism and supporting England are incompatible things or express some sort of contradiction as you clearly are implying?

Enjoying football, supporting a team and wanting workers to be able to participate in cultural events are not incompatible with disapproving of jingoistic newspaper reporting.

There’s a lesson for the England team in its next game. Don’t play like Lewis, boys.