As the UN investigates poverty in the UK, Tory millionaires pay to ride in Jacob Rees-Mogg’s Bentley - The Canary 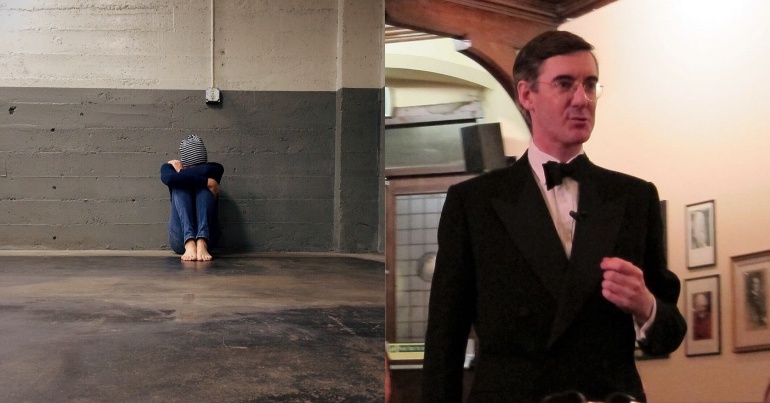 A senior UN investigator is set to examine the impact of Conservative austerity policy and the rise of poverty in the UK. But against this damning backdrop, Tory millionaires donated tens of thousands of pounds to the ruling party at a lavish fundraising event.

In the UK, over 14 million people now live in poverty. But at the Conservatives’ annual summer party, guests (having paid up to £1,500 for a ticket) drank, ate lavish food, and bid thousands for ‘top Tory prizes’ – including a ride in Jacob Rees-Mogg’s Bentley.

Tickets to the event cost up to £1,500 per person. And guests donated even more money in an auction. According to the Mirror:

One paid thousands to be driven around Somerset by leading Brexiteer Mr Rees-Mogg in one of his vintage Bentleys. The sale’s brochure boasted the posh MP would also serve a “home-cooked meal”.

Other lots included: homemade dinner with the Goves; Esther McVey leading something to do with Conservative women (and lunch); and galavanting in a museum with Boris Johnson.

Rich Tory donors paid £1,500 a head for tickets to rub shoulders with ministers and bid on exclusive lots including rides in Jacob Rees-Mogg's Bentley, dinner with the Goves and wine tasting with Brandon Lewis. Tories represent the few not the many… #r4today pic.twitter.com/w41chGQr6u

According to the Mirror, MPs made a concerted effort to secure bids:

But don’t forget, these prizes also give Tory donors close access to ministers and MPs.

And yet again, questions emerge about just who might be bidding on these lots:

And as if these concerns weren’t enough, some of the lots on offer at this summer party were violent and unethical. There were two hunting prizes available, for example, with “guns and ammo and a lunch afterwards”.

#Pheasant and partridge shoots were on offer at the #Conversative Summer Party.

These trips “fly in the face” of Michael Gove’s attempt to address public concern over #animalwelfare https://t.co/6BZ5u8ZPsw

The Mirror reported that, during the event, Theresa May “pleaded” with Tories to “stand together”. But as Brexit chaos continues, apparently even the Conservatives’ own donors are not happy with the party. According to the Times [paywall], key donors had “discussed withdrawing funding” because:

Theresa May’s efforts to strike a Brexit peace deal with her cabinet have been plunged into chaos amid infighting and mounting suspicions over a compromise on customs.

Some were quick to share the fact that the Times also reported [paywall] that:

A Tory donor said: “A group of us were at the Tory bash at the Hurlingham Club last night. We funded the bash. We fund the party. We were all asking why we fund this s***show”. They conceded, however, there was no other political party to switch their cash to.‘ The Times (3/7/18)

So donors are reportedly questioning their investments, but don’t know where else to send their cash. This truly sounds like a party in crisis.

But this is nothing compared to the crisis that Tory austerity has created for millions of ordinary working people.

This event epitomises all that is wrong with this government. As the Mirror reported, Labour Party chairman Ian Lavery said:

Rather than swanning about at fancy dinners, ministers should be hard at work fixing the mess they are making of Brexit, the crisis they have created in our public services and the falling living standards of people across the country.

After years of austerity, UK living standards have fallen so far that the UN will launch its first investigation in a western European country in over half a decade. As The Canary previously reported:

Given the shocking levels of poverty, homelessness and the dire human rights situation in Britain, it seems unlikely the investigation will yield positive results.

Both Labour and the Green Party have promised to address poverty and raise living standards. This sounds far more appealing than a ride in Rees-Mogg’s Bentley; a prize for the rich which is just another Tory car crash.

Featured images via Cantab12/Wikimedia and Pixabay