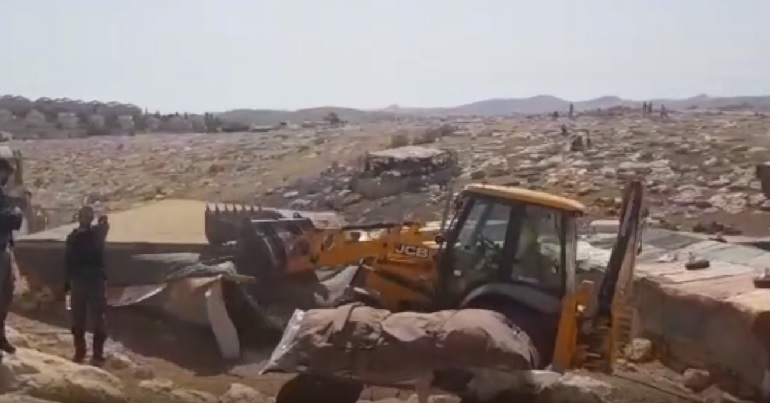 Leaving occupied civilians without a home

In a press release on 4 July, B’Tselem explained:

Civil Administration personnel came with three bulldozers and an escort of dozens of police to the Palestinian community of Abu a-Nuwar, which is in the region of the settlement of Ma’ale Adumim. They demolished nine dwellings and three farm buildings, leaving 62 people – about half of them minors – without a home.

It also released the following video of the demolitions:

In the Palestinian community of Khan al-Ahmar, meanwhile, B’Tselem said police had:

arrested several people who were staging a non-violent protest and blocking a bulldozer from getting through. Also arrested was B’Tselem Field Research Director Kareem Jubran who was filming events as they unfolded.

This morning Israel began paving an access road to #KhanalAhmar in preparation for demolishing & transferring the Palestinian community. The police arrested several people who were non-violently protesting & our field research director Kareem Jubran who was filming the events pic.twitter.com/AXrsrgL3mo

“Forcible transfer is a war crime”

In recent weeks, B’Tselem has been leading a campaign – supported by hundreds of international public figures – against the forcible transfer of Palestinian civilians. It says:

We’re not talking about something hypothetical. It’s something that’s happening right now, every day: Israel is trying to displace thousands of Palestinians who live in about 200 farming-shepherding communities throughout Area C of the West Bank. Dozens of these communities face imminent expulsion, and others are subject to various forms of abuse, violence and dispossession.

From 2006 until 30 June 2018, Israel demolished at least 1,342 Palestinian residential units in the West Bank, causing 6,024 people – including 3,040 minors – to lose their homes.
Updated statistics on Israeli demolition of houses in the West Bank: https://t.co/z2y9GOUiQ3 pic.twitter.com/OPVxi2zvOA

It is a crime to transfer the protected residents of an occupied territory from their homes, regardless of whether the transfer is accomplished by brute force or by making residents’ life so unbearable that they leave, ostensibly of their own accord. Either way, forcible transfer is prohibited and constitutes a war crime.

The organisation also explained that:

Israel’s strategy is to forbid Palestinian construction of either private or public buildings. It also denies them the option of connecting to running water and electricity, and keeps them from paving roads. In some communities, Israel has demolished homes as well as infrastructure set up by the residents – such as solar panels for generating power, water cisterns and access roads…

This is a form of organized, ongoing state violence designed to minimize Palestinian presence in the West Bank by gathering residents into several sites, while dispossessing them of their land and property.

‘Nothing can make this lawful or moral’

In its press release on 4 July, B’Tselem stressed:

no military order or court ruling can make the transfer of these residents lawful or moral. Forcible transfer of Palestinian communities is a war crime, and all who are involved in approving or implementing it bear personal liability.

If you agree with B’Tselem, you know what to do:

– Join B’Tselem’s campaign against the forcible transfer of civilians in the Occupied Palestinian Territories, and support the Boycott, Divestment, Sanctions (BDS) movement.

– In the UK, meanwhile, you can write to your national or local politicians to share your concerns.