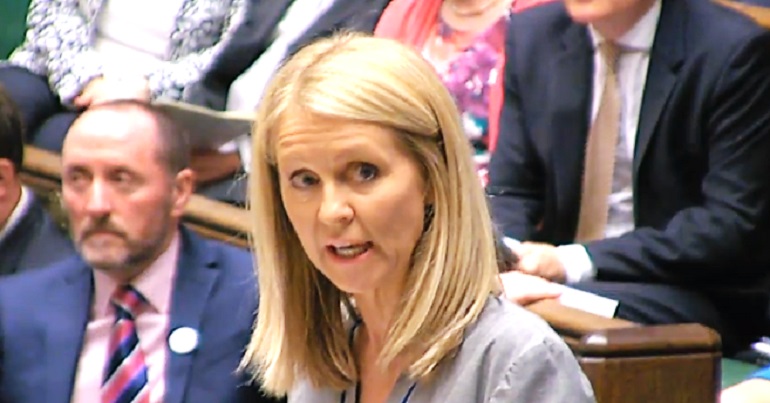 Labour just tore apart Department for Work and Pensions (DWP) chief Esther McVey in parliament, who stands accused of “lying” to the House of Commons.

Chaos at the DWP

As The Canary previously reported, on 15 June, the National Audi Office (NAO) issued a damning report into Universal Credit. But as The Canary‘s Emily Apple wrote on Wednesday 4 July:

McVey refused to accept the findings. She claimed in parliament that the report was based on out-of-date figures and that the NAO “did not take into account the impact of our recent changes”. She also claimed that Universal Credit was working.

But the NAO hit back, accusing McVey of providing “no evidence” of her claims against its report, nor that any of them have been “proven”.

McVey apologised to parliament on 4 July. She said she had “inadvertently” misled it, by claiming that the NAO had said the rollout of Universal Credit should be sped up; something it did not say. But for Labour, this wasn’t good enough; it believed she may have to quit over the affair.

So Labour tabled an urgent question on Thursday 5 July.

Will the secretary of state please use this opportunity to apologise for the three instances where she’s dissembled on a National Audit Office report on Universal Credit?

Speaker John Bercow interjected, accusing Field of being “naughty”, and of using “rhetorical licence” to embellish his question. He also defended McVey, claiming she made an “innocent error”.

McVey then stood to speak. To say she went around the houses would be an understatement; using a combination of clever language and references to the report, she essentially failed to answer Field’s questions. She defended her stance and the DWP’s position, maintaining that while she and her department agreed with some of the NAO report’s points, it disagreed with its conclusion. This is because, McVey said, the NAO report failed to take into account the “impact” of changes the DWP made to Universal Credit:

Field was unimpressed. He was “grateful” to McVey for apologising for one incident where she “dissembled” on the NAO report. But he pointed to comments by the auditor general, saying there were two other incidences for which she should apologise, and calling for her to “pause” Universal Credit’s rollout:

McVey was again unrepentant, maintaining that she only needed to “apologise for using the wrong words” and making her “interpretation” of the report “incorrect”. But she was adamant that the NAO report’s conclusion was still wrong.

Her responses left people on Twitter less than impressed:

Esther McVey's newest despatch box response, this morning, to having been accused of lying about universal credit is truly a wonder. Pure Finnegans Wake. Does the public know just how many ministers in this government are beyond all measure of useless?

"Esther McVey should resign because she is either incompetent or dishonest, says Labour" – I'm not convinced those two things are mutually exclusive in this case

There seems to be no end to either McVey’s incompetence or her ability to mislead parliament. The jury could be out on which one it is, but either way Labour is right. This minister needs to go. And quickly.