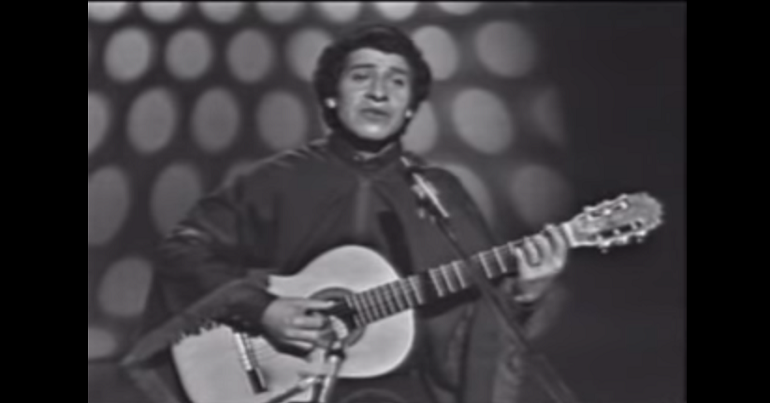 Eight retired soldiers in Chile have been convicted over the murder of legendary folk musician and theatre actor Victor Jara days after Augusto Pinochet’s military coup in 1973. A ninth soldier was convicted for accessory to murder.

Jara, the husband of British ballet dancer Joan Turner, was arrested at work – at the University of Santiago – on 12 September 1973. He was taken to the national football stadium. There, he was tortured and then shot 44 times. His body was displayed at the entrance of the stadium and later dumped in the street.

Col. Hugo Sanchez Marmonti, Col. Raúl Jofré González, Col. Edwin Dimter Bianchi, and five others were given “15 years and one day in prison” for the murder – plus three more for the kidnapping. The ninth person was given a five-year sentence for obstructing the course of justice.

The sentences, however, can now be appealed.

Victor Jara was born in 1932 in Lonquen, Chile. He was poor but very talented, and became one of Chile’s most famed folk musicians and theatre actors. He met British ballerina Joan Turner and they married and lived in Santiago de Chile with their children Manuela and Amanda.

Victor was a founder of the neo-folk musical movement called ‘la nueva canción‘ (‘new song’), which rallied for social change. This music became emblematic for left-wing social activism during the oppressive 1950s and 60s across Latin America. During the Pinochet dictatorship, this type of music was banned from public life and artists were exiled.

Jara’s songs were about the lives of ordinary people and their political struggles. His fame and popularity made him an easy target during the military crackdown following the coup. He was one of around 5,000 people rounded up and taken to the national football stadium. Others such as Frank Teruggi and Charles Horman, depicted in the film Missing, never made it out alive.

Jara’s death was emblematic of the cruelty of the dictatorship. Those who witnessed his treatment at the stadium claim that his hands were cruelly broken by mocking soldiers who told him ‘get up and play’ while butting him with their rifles.

The news of the sentencing has triggered worldwide responses. Rolling Stone magazine has previously described Jara as one of history’s most rebellious musicians. And Jara was admired and revered by many in the music industry, including U2, Billy Bragg, Bruce Springsteen and Peter Gabriel.

So glad to hear justice has come for the killers of popular Chilean Songwriter featured in One Tree Hill…. Adamhttps://t.co/9vNheeJ9IJ

News of the convictions has been welcomed across the globe – particularly by Jara’s widow Joan, who has spent the last 45 years campaigning for justice. But it’s feared the sentences may be appealed.

Most worryingly, retired Pedro Pablo Barrientos – who was found liable for Jara’s murder – is in hiding in Deltona, Florida.

A jury determined that Barrientos – a Pinochet loyalist who commanded the Chilean army’s notorious Tejas Verdes brigade – “should pay $6m in compensatory damages and a further $22m in punitive damages”. It found him liable on both counts of the civil indictment, for torture and extrajudicial killing in 2016. But the US has been dragging its heels and has, so far, not assisted with the extradition of Barrientos – who fled Chile in 1989.

It’s also feared that the current hardline right-wing government in Chile – which has vocal Pinochet supporters in its cabinet – may grant state pardons to the killers. Because in June, the Chilean government pardoned a criminal responsible for the death of six people, including a pregnant tourist.

While justice has been seen to be done for Jara after 45 years of struggle, the extradition of Barrientos remains outstanding.

And whether those convicted for Jara’s murder will be made to serve their sentences in a proper prison or simply be whisked away with the rest of Pinochet’s stooges (to the controversial, specially-built ‘prison’ of Punta Peuco) will be a contentious area for human rights activists still searching for Chile’s 4,000 disappeared.