Is BuzzFeed the new Breitbart? The site's choice of new political correspondent suggests it might be. - The Canary 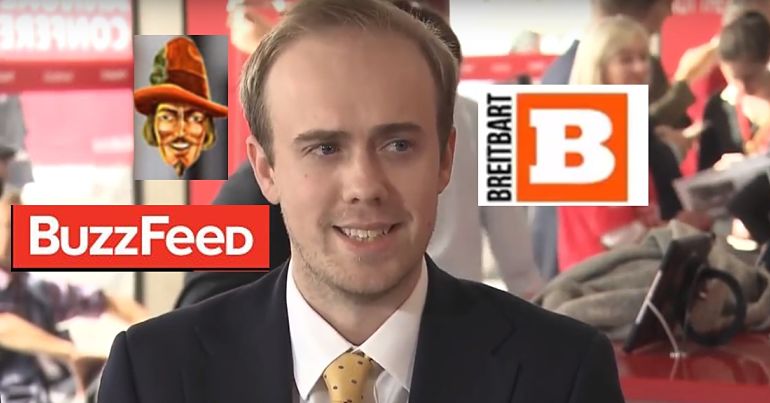 After six great years at @GuidoFawkes, hugely excited to be joining @BuzzFeedUK in September. Runners and riders for a new twitter handle welcome…

A step in the wrong direction

A spokesperson for BuzzFeed UK stated Wickham will bring a:

proven track record of getting agenda-setting scoops to BuzzFeed.

BuzzFeed UK‘s head of news Stuart Millar, meanwhile, was over the moon at the appointment:

But author and journalist Peter Jukes was not feeling so positive:

This is desperately bad news. Wickham has spent years in the sewer of Guido Fawkes, and I've seen setting up targets with kompromat, twisting words, misrepresenting the truth. He's not a journalist, he's a barbed ideologue. Sad day for Buzzfeed. https://t.co/gJRoaDyjIu

If Buzzfeed Politics were seriously trying to improve their image, perhaps appointing a far-right hack who has repeatedly published blatantly fake news to a site riddled with racist commenters as their new Political Editor probably wasn’t the greatest idea.

One Twitter user predicted a tough time ahead for BuzzFeed UK‘s editors:

Prediction: today will be spent with Twitter pulling out all the really shitty things Alex Wickham has written during his Guido years, while the BuzzFeed editors awkwardly tug at their shirt collars.

The highlights include Wickham approaching Tory MPs on Twitter in disguise, in a bid to entrap them into a ‘sexting’ scandal:

This is the kind of low rent sleaze and smear Buzzfeed are rewarding "at least eight Tory MPs were approached by Wickham in his Twitter disguise as "Sophie Wittams", raising questions about whether he really did have prima facie evidence about all of the" https://t.co/kSPH3tPNyg

And Guido Fawkes has made its name by spouting sensationalist right-wing stories which don’t always turn out to be true, with Wickham at the heart of it.

There is a Stasi file in the German archives on Jeremy Corbyn that the authorities there won't release without his consent. If he has nothing to hide, surely he will tell them to publish it?

Wickham based these accusations on a Guido Fawkes article. But the organisation that keeps Stasi records has since announced that there is no file on Jeremy Corbyn:

On the 21st February, 2018, the Stasi archives issued a public statement saying it could not find any records at all on @jeremycorbyn, yet this dangerous, hate-filled, #fakenews, smearing tweet didn't prevent @BuzzFeed from offering a job to Alex Wickham aka @WikiGuido. https://t.co/F3UCZl2AtN

And this was not the first time Wickham had put smearing Corbyn ahead of the truth:

Two other fake-y stories Alex Wickham helped that fell apart when picked up by the national media – pusing the "Corbyn went to Jewdas" event, without , er, mentioning they were a Jewish group, and promoting a fake Breitbart story about Hamas endorsing Corbyn.

Guido Fawkes broke the sensational scoop that Corbyn attended a Seder feast hosted by a Jewish group in his constituency. If these are the kind of “agenda-setting” scoops Wickham is going to bring to BuzzFeed UK, then look forward to other ‘obvious’ headlines such as ‘couple gets married’ or ‘dog poos outside’.

Even without Wickham’s chequered past, BuzzFeed UK‘s appointment is odd – as the two have not always seen eye to eye.

Responding to the news that BuzzFeed UK‘s former political editor Jim Waterson was leaving for the Guardian, Guido Fawkes published a frankly insulting article ridiculing the candidates in line to replace him. It described the job as:

a sweet gig: you get free pizza and beer on Fridays and only have to file once every couple of weeks.

It then criticised the internal candidates, including Emily Ashton and Alex Spence – who will be Wickham’s new colleagues. I wonder if the beers will be flowing on Friday?

At the risk of sounding like Donald Trump, BuzzFeed UK is struggling. It reported a £3.3m loss in 2017, leading to a host of redundancies. Therefore, Wickham’s appointment represents a new start for the website. Yet it stinks of desperation:

One way of looking at the Wickham news is that it shows BuzzFeed prioritises access over integrity. Some similarities with Lebedev hiring Osborne for his access and profile, despite lacking any relevant experience.

Wickham worked for a racist site, can’t write, is completely without any kind of principle, and lies shamelessly. Is Buzzfeed trying to copy Breitbart?

It seems like this is BuzzFeed UK‘s last-ditch attempt to get in with the big boys:

Wickham who's written mostly for Breitbart, Guido Fawkes and the Sun, moves to BuzzFeed, because of his close connections with the Tories.

Adjust your shirt BuzzFeed, your willingness to serve the narrow interests of political and economic elite is showing. https://t.co/HiQcDsKfVi

Wickham’s appointment could lead to many turning their back on BuzzFeed UK:

Deeply disturbing. One question. Why? People attack MSM, but I think I'll stick with it over the likes of Wickham, thanks. Actually, I retract deeply disturbing, and replace with shameful. BuzzFeed – blocked!

It represents a well-trodden route from right-wing fringe to mainstream journalist:

Waterson actually started out as an intern at Guido Fawkes before eventually moving to BuzzFeed UK from City AM. He is now media editor at the Guardian. It’s worrying that Wickham could conceivably follow this same path.