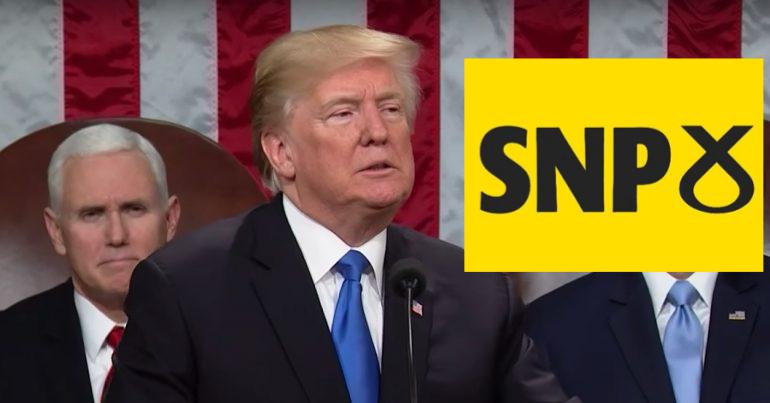 A top SNP politician has told Donald Trump he’s not welcome in Scotland, on the day the president is set to arrive north of the border.

Deputy leader of the party Keith Brown said that Scotland rejects the “abhorrent” policies of the US president. In speaking out, the MSP joined leaders from the Scottish Greens and Scottish Labour who have been vocal about Trump’s arrival.

Thousands are expected to demonstrate in Scotland over the weekend from 13 July at a series of protests. Brown, a former government minister, is the latest to add his name to the march.

Preparing for the visit, Brown made it clear that his party did not support the US president. As the Scotsman reports, he said:

Scotland today stands united – with people from all backgrounds and all nations – against Donald Trump. We will send a message to Donald Trump that Scotland rejects the abhorrent treatment of little children on the  US-Mexican border.

Scotland opposes his attempt to wreck the Paris Climate Agreement and his vilification of Muslims. We also oppose his barbaric language and treatment of women. Our ­message will be clear: Scotland rejects Trump’s politics of division and hatred and we stand with our friends in the US who oppose him.

Brown was not the first SNP politician to speak out on the visit. Westminster leader Ian Blackford and Dundee MP Chris Law have also been vocal in their opposition.

The mass protests organised in Glasgow and Edinburgh have enjoyed cross-party support.

Scottish Labour leader Richard Leonard will be speaking at the 13 July rally at Glasgow’s George Square. Leonard recorded a special message of his own, encouraging people to join the demonstrations:

Join me at protests in George Square, Glasgow tonight at 5pm and in Edinburgh tomorrow from 12pm.

Together, united, we will show the world that Scotland rejects Trump’s politics of hate, division and greed. pic.twitter.com/5kxkxdc3rv

The Scottish Green Party has also been getting ready for the marches. The party has been heavily involved in the organisation and promotion of the protests.

Elected representatives have not been holding back their criticisms either. The night before the visit, Green MSP Ross Greer labelled the president a “shit-gibbon”:

Who woukd have thought inviting this shit-gibbon for a state visit would result in crushing humiliation for the government within hours of his arrival? pic.twitter.com/qK5bLLnYbm

Prestwick and the president

Trump will touch down at Glasgow Prestwick Airport on the evening of 13 July, despite calls for him to be banned from the publicly owned airport.

His arrival is not the only controversy currently surrounding the airport. US military use of the site has been challenged extensively in the Scottish parliament. Recent revelations that rendition flights are likely to have landed at Prestwick have only added fuel to the fire.

He will then travel to his luxury golf resort Turnberry, on the south-west Ayrshire coast, where he is expected to stay until Sunday 15 July on a private visit.

After mass demonstrations in London, it is now Scotland’s duty to show that the far-right rhetoric of Trump does not have a home in this country. The thousands set to march will do just that.

– Join the protests against Trump. 13 July in Glasgow and Dundee. 14 July in Edinburgh and Turnberry.