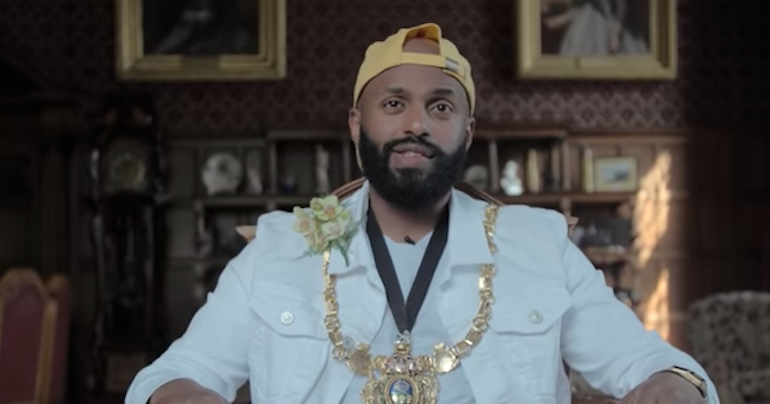 Celebrations are kicking off in Sheffield after the first ever Green lord mayor of the city declared 13 July to be Mexico Solidarity Day in the city. The mayor, Magid Magid, also banned Donald Trump from Sheffield and called the US president a “wasteman”.

The Green Party’s announcement, made on 4 July, was accompanied by a photo of Magid posing in a sombrero:

Our Lord Mayor of Sheffield @MagicMagid banned Trump from his city. Now he’s coming to London to kick him out of the capital. While Theresa May rolls out the red carpet, we prefer to stand against hate.

Join us on 13 July to stand up to Trump ⬇️https://t.co/70EZ3BndGe pic.twitter.com/W1fjhlt9jb

The lord mayor’s decision to ban Trump was influenced by the president’s policy of separating children from parents at the Mexican border. Magid also expressed frustration with Trump because he pulled out of the Paris climate accord, and imposed the Muslim travel ban.

Magid even provided a list of reasons why he had banned the “wasteman” president from Sheffield, and detailed what people could do to beat the president:

The ban was criticised by the council. The BBC reported:

The council said Mr Magid does not have the power to ban anyone from the city, but that full council “may through a collective, democratic debate and process, agree to condemn the views of an individual or organisation”.

The Mexico Solidarity Day celebrations will be taking place across many different pubs and restaurants in Sheffield. Venues around the city will be offering free tequila shots and Mexican food to mark the occasion:

So, tomorrow in Sheffield is Mexico Solidarity Day, as declared by our Lord Mayor @MagicMagid To honour this, our diner's menu will be taking on a Mexican twist! We're open from 10 til 4. Arriba! pic.twitter.com/x7AmI5mlXC

The lord mayor encouraged all his social media followers to get involved in everything and stick it to “the giant orange wasteman”:

Everyone get your normal-sized-hands over to City Hall for 5pm today! Show the world that Sheffield stands united against Trump ✊

If you're looking for somewhere to go before or after 👇👇👇 these awesome places are supporting #MexicoSolDay 🇲🇽 pic.twitter.com/ymj8RhS9p3

The celebration will end with a mass protest at Sheffield City Hall at 5pm. Magid will be joining protesters to express solidarity with those marching against Trump.

The lord mayor has even been complimenting protesters’ placards on Twitter:

Magid is a former refugee from Somalia and has been vocal about Trump’s intolerance towards minorities. He has also been critical of the contemporary UK immigration policy, claiming that he and his family would not have been allowed into the UK under the current system.

Magid has gone on TV to ask that Theresa May stand up to Trump:

The lord mayor wants to fight hate with love, and he’s encouraging Sheffield to stand in solidarity with Mexico. His radical action to fight back against Donald Trump’s politics of hate will be viewed positively by his supporters in Sheffield.

It’s lucky for Trump that Sheffield isn’t on his visit list.