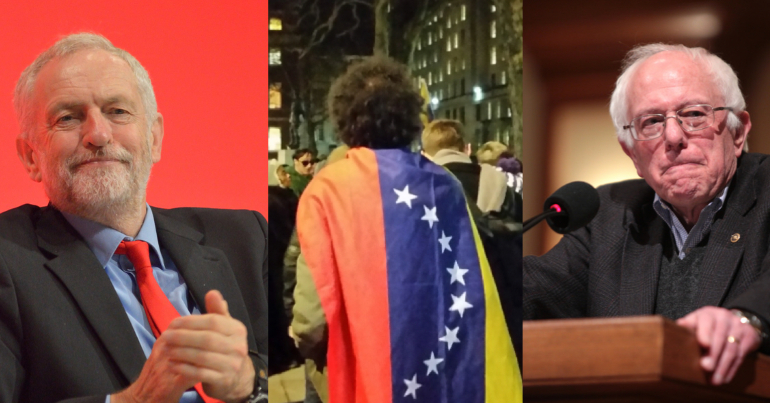 Establishment media voices and others on the right claim the current situation in Venezuela proves socialism doesn’t work. The problem is, that argument falls flat on its face.

Venezuela has been suffering from a severe economic crisis. That has entailed hyper-inflation, shortages of goods and medicines, and an exodus of people out of the country. And international voices seeking to weaponise this crisis smugly claim it’s ‘proof that socialism always ends in failure’.

As the US-backed coup attempt against President Nicolás Maduro’s government has heated up in recent days, these commentators have gone into overdrive. From the New York Times to CityAM, and from the Times to ‘neoliberal opinion’ website 1828 (via disgraced UK politician Priti Patel), the message was the same: ‘Venezuela is terrible. That’s because of socialism. So anyone who claims to be a socialist is also terrible.’ That can mean Jeremy Corbyn in the UK, or Bernie Sanders and Alexandria Ocasio-Cortez in the US.

It’s a typical ‘guilt by association’ smear, which some refer to as the ‘ad Venezuelum’ argument. It’s also a complete fallacy. And below are six reasons why.

1) Venezuela isn’t the US or the UK

The ‘ad Venezuelum’ argument is dishonest. We can see that when we look at Venezuela’s history. For one thing, comparing it with Western countries is problematic – if not worthless. Because Venezuela’s economy is nothing like those of countries like the US and UK. It’s a developing Latin American nation that never really industrialized. And it’s almost totally dependent on oil.

Before the 1930s, it was a largely agricultural society that relied on the export of crops like coffee and corn. But in the 1930s, oil was discovered. And ever since, it has been a ‘petro-state’. So it’s been neither socialist nor capitalist in any normal sense. Instead, it’s what economists term a ‘rentier economy’. This means that most of the country’s set-up focuses on oil-related ‘rent-seeking behavior’ (i.e. making income without creating any new wealth).

2) The ‘Dutch disease’ and the ‘resource curse’

As is the case with many natural resource-rich countries, Venezuela has suffered from both the ‘Dutch disease‘ and the ‘resource curse‘.

The former is when a country’s manufactured and agricultural exports become less competitive globally due a focus on natural resource exportation. As a result, Venezuela has never diversified its economy. That’s a problem that long predates the Hugo Chavéz and Maduro presidencies. It has meant a highly unstable economy that suffers catastrophically when global oil prices fall. And this has happened throughout the country’s history. In 1983, for example, Luis Herrera of the center-right COPEI party oversaw a severe economic crisis (due to a global oil glut) that included devastating external debt problems and spiralling inflation. (Note: no one at the time claimed this as proof that capitalism doesn’t work.)

The resource curse, meanwhile, explains how countries rich in natural resources often end up with worse outcomes in terms of governance and economic performance. Some reasons are obvious. The risk of corruption – or even ‘kleptocracy’ – is ever-present. And that has been a problem in Venezuela since long before Chávez and Maduro. At the same time, Venezuela has imported practically everything for decades – including much of its food, in spite of having ample fertile land. When oil prices started to tank in 2014, that reduced the government’s income and access to foreign exchange. This led to a declining ability to keep up levels of importation – hence the shortages of goods and medicine.

The causes of the country’s most recent economic crisis are complex. And experts have differing opinions. But that doesn’t take away the temptation for right-wing commentators to push simplistic arguments. No serious specialist on the matter will claim the crisis is proof that socialism doesn’t work, though; and that includes the more moderate members of Venezuela’s opposition.

Moderate opposition figures largely argue that government mismanagement has been a key cause of the crisis. But as with corruption, such mismanagement can just as easily happen under right-wing/capitalist governments. In Argentina, for example, Mauricio Macri’s right-wing government is also struggling to contain a spiralling financial crisis.

4) The ‘economic war’ – both internal and external

Government sympathisers, however, tend to argue that the major cause of the crisis has been an ongoing ‘economic war‘. They say the US and its internal allies have waged a destabilization campaign in order to topple (or at least discredit) the government. And they argue that a largely hostile business sector, close to the opposition, has deliberately used tactics of economic sabotage like hoarding goods.

This is all the more damaging because Venezuela isn’t a typical ‘socialist’ state-managed economy. Instead, the private sector has long controlled the vast majority of the economy – including under Chávez and Maduro. This includes the powerful Polar food company, which controls a large part of food production and distribution. In fact, between 1999 and 2011 (under Chávez), the proportion of economic activity in the private sector actually increased – from 65% to 71%. As a result, the ruling party has received substantial criticism from its left-wing members for not bringing more of the economy into popular ownership.

Some government critics dismiss talk of ‘economic war’ as a conspiracy theory. But there is undisputed evidence for it both internally and externally. The country’s 2002-2003 “oil strike” (a management-led lock-out), for example, was a clear case of economic sabotage by the internal Venezuelan opposition. No one denies it happened. On the part of the US, destabilization continues via a crippling financial embargo that has made it impossible for the government to stabilize the economy. And then there is the historical precedent. In the early 1970s, for instance, Richard Nixon said he wanted to “make the economy scream” in Chile in order to “prevent [left-winger Salvador] Allende from coming to power or to unseat him.”

Journalist Ryan Mallett-Outtrim argues that the Venezuelan government’s monetary policy has been the major cause of the crisis. In particular, he says the fixed exchange rate had an unintended impact on demand for currency that led to an inflationary spiral.

It’s also important to note that there’s nothing particularly socialist about a fixed exchange rate. Progressive economist Mark Weisbrot, for example, has argued for years that the government should abandon it and instead move toward a floating exchange rate. At the same time, though, the Chávez and Maduro governments pushed it forward in the first place as an effort to protect the country against potential runs on the currency.

6) Other experiences across the region

Then there are the places where left-wing governments have not failed. And there are numerous such governments across Latin America, which have not experienced major economic crises. The Chavista-aligned Evo Morales in Bolivia, for example, has governed since 2006. And this historically impoverished country has experienced strong economic growth, rising living standards, reduced inequality, and stable inflation. Even the right-leaning Bloomberg website has praised Morales, saying on 3 January 2019 that:

Bolivia, another resource-dependent Latin American country, … has been doing great.

It even conceded that Bolivia’s nationalizations of “the oil and gas industry and the electric grid” make sense, since these are “centralized, stable industries where government ownership is common around the world.”

People who push the ‘ad Venezuelum’ argument will conveniently ignore Bolivia, though. Because it would undermine what they claim, as it shows that progressive policies can and do achieve great successes.

Cut through the nonsense

We must call the ‘ad Venezuelum’ fans out on their nonsense. It’s a dishonest tactic, and we can easily debunk it. We need to defend the fight for a better world. And that means doing all we can to counter harmful right-wing propaganda.