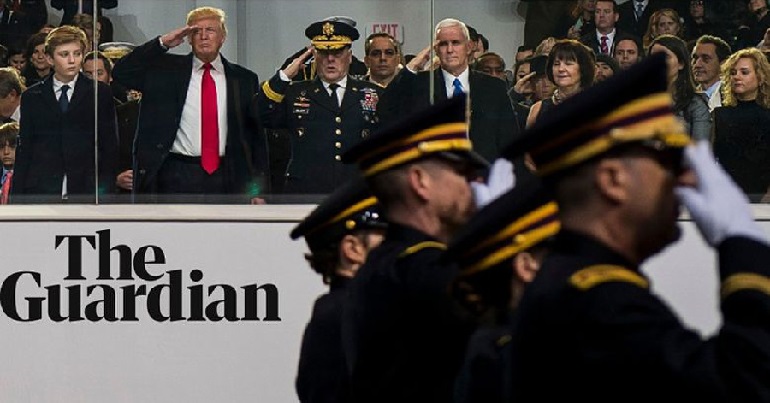 Without a compliant media, the legitimacy of Western imperialism would crumble overnight. From the invasion of Iraq to the bombing of Libya, supposedly ‘fearless’ news outlets like the Guardian are essential to fostering support for ‘noble‘ and ‘well-intentioned’ military interventions abroad.

Now, having destroyed Iraq and left Libya a hotbed for slavery and human-organ trading, the West’s imperial gaze has returned to Latin America. And by continuing to legitimise coup attempts in Venezuela (and elsewhere), the Guardian is making all the same mistakes again.

Foreign intervention requires some degree of popular support, so pro-imperialist journalists play a key role. That’s why, in order to make intervention seem like an act of good will, a propaganda campaign to prepare the way is essential.

Today, there is no evidence to suggest – as US national security adviser John Bolton has claimed – that Washington wants “freedom and democracy in Venezuela”. Yet the corporate media has supported US interference with enthusiasm. Venezuela and other targets for regime change might have oil, they say, but that doesn’t mean our governments don’t care about human rights, weapons of mass destruction, narcotics production etc.

Years of smears from the Guardian

The Guardian has faced accusations of “propaganda” on Venezuela for years. And indeed, it has a long record of smearing the Venezuelan government, supporting opposition power grabs, and presenting Western intervention as a noble solution. In doing so, it is complicit in offering moral authority to the current coup attempt in Venezuela, and therefore complicit in Western imperialism.

Alan MacLeod, journalist and author of Bad News from Venezuela: Twenty years of fake news and misreporting, told The Canary that:

After studying its coverage of the country over a 20-year period, the Guardian has played a crucial role in distorting the image of Venezuela in the UK. The qualitative difference between it and even the most conservative Western outlets is limited, and primarily comes down to tone, rather than substance.

In other words, the Guardian doesn’t let its supposedly left-leaning, liberal identity distract it from supporting the corporate media consensus.

It has published articles in support of multiple opposition coup attempts, including in 2002 [during a prior US-backed coup attempt] and the wave of terror unleashed in 2014.

In 2006, Rory Carroll became the Guardian’s Latin American correspondent. According to journalist and filmmaker Pablo Navarrete, Carroll arrived in Venezuela in 2005 and said that he “knew nothing about Latin America and didn’t speak Spanish”. Navarrete continued:

He invited me to his housewarming party, in Altamira (one of the richest part of Caracas in the east) at a luxurious penthouse style apartment. Foreign correspondents + other "expats" in the apt's expansive veranda sipped cocktails while the barrio lights glistened on the horizon

Carroll published over 70 separate articles with former president Hugo Chávez’s name in the headline (largely negative). He also wrote in 2007, for instance, that “The Bush administration tacitly backed a coup that briefly ousted Mr [Hugo] Chávez in 2002”. This is quite an understatement, given that Washington gave over $20m to anti-Chávez groups and planned for the president’s arrest with CIA involvement.

Within another article, Carroll claimed that Noam Chomsky had criticised Chávez for an “assault” on democracy. Chomsky responded by calling Carroll’s title “quite deceptive”. And when the Guardian finally released the transcript of the interview, it turned out Carroll had misrepresented Chomsky’s words.

The Guardian has since continued to misrepresent the Venezuelan government and support anti-government forces.

In 2017, it branded Chávez’s successor Nicolás Maduro a “dictator”. This came within six months of celebrating Saudi crown prince Mohammed bin Salman as “a risk-taker with a zeal for reform”. The same year, it suggested that Óscar Pérez – who had stolen a helicopter and fired on the Venezuelan supreme court and interior ministry with grenades – was a “patriot”. (Just imagine if the Venezuelan media had celebrated the Westminster attacker – who killed an unarmed policeman – as a ‘patriot’).

Maduro’s shortcomings – as exaggerated as they might be – are ultimately irrelevant, though. Because the vital issue at stake is Venezuelan sovereignty. And this should be the focus of every single newspaper – especially those that claim to be on the left.

The Guardian‘s utter failure to do its job highlights yet again just how important independent, anti-war, and anti-imperialist media outlets really are.

Featured images via Master Sgt. Michel Sauret and The Guardian