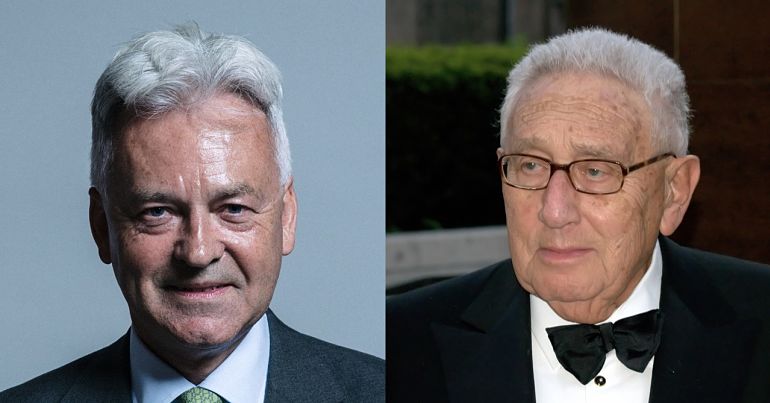 Conservative MP and minister for Europe and the Americas Alan Duncan epitomises Western imperialism. He began his career working for oil multinational Shell, became an MP in 1992, and proceeded to vote for pretty much every instance of UK military action abroad. This includes five votes for the invasion of Iraq and one absence.

On 28 January, Duncan made a statement on the ongoing Western-backed coup in Venezuela. He (falsely) accused President Nicolás Maduro of holding “deeply flawed elections”, and called Venezuela “a state that is run by cartels and criminal gangs”. He also claimed that the country “harbours groups such as the ELN [a Colombian guerrilla group]… that threatens to destabilise Colombia’s hard-won peace agreement”.

Fabulous breakfast with the legendary Dr Henry Kissinger. Possibly the greatest US Secretary of State. He is wisdom personified. Hope I can be as spritely aged 95. He really is quite something! @DrKissingerPhD @foreignoffice pic.twitter.com/ggCoRBA4bH

Duncan’s definition of “wisdom personified” is quite instructive. Because Kissinger, Duncan’s breakfast buddy, is in no uncertain terms a war criminal. While serving as US national security adviser between 1969 and 1975 and secretary of state between 1973 and 1977, Kissinger orchestrated some of the 20th century’s worst atrocities.

In 1968, Kissinger sabotaged peace talks in Vietnam in order to help Richard Nixon win the presidency. For the next four years, Kissinger oversaw the slaughter of millions of Indochinese civilians. This included an illegal bombing campaign in Cambodia and Laos, which received no approval from US congress. Kissinger also committed the international crime of waging chemical warfare.

Kissinger was then awarded the Nobel peace prize in 1973 for negotiating the same peace deal he had heroically thwarted a few years earlier.

The 1973 coup in Chile, meanwhile, shares disturbing parallels with the current attempted coup in Venezuela. This, again, was a catastrophe largely of Kissinger’s making. As the late Christopher Hitchens wrote in 2002:

Even before [Salvador] Allende had taken the oath of office in 1970, death squads paid for by Henry Kissinger had embarked on a campaign of murder and destabilisation, and had shot down the chief of the Chilean General Staff, René Schneider, in the street, for nothing more than his legalistic opposition to a coup.

With US weapons and CIA support, the Chilean military then destroyed Santiago’s presidential palace and butchered Allende. Chilean democracy was replaced with a murderous dictatorship under Augusto Pinochet.

Chile had committed the unforgivable crime of electing a socialist government. In Nixon’s own words in 1970:

If we let the potential leaders in South America think they can move like Chile… we will be in trouble.

Duncan’s Conservative Party supported both the 1973 coup and Pinochet’s dictatorship. And under Margaret Thatcher, the Conservatives reportedly protected Pinochet from facing trial for human rights abuses by keeping him under house arrest in Britain.

Duncan’s sycophantic admiration of Kissinger is a dark reminder of how the US and UK governments conspire to destroy democracy at their leisure.

While he abstained on voting to bomb Libya in 2011, the Guardian reported the same year that Duncan:

Took part in meetings between officials operating a Whitehall cell to control the Libyan oil market and Vitol – a company for which Duncan has previously acted as a consultant.

Shell, Duncan’s former employer, was also reportedly involved in secretly planning the re-distribution of Iraq’s oil resources after the 2003 invasion.

Duncan’s concerns over peace in Colombia also seem insincere. For decades, the UK government has been funding the Colombian military and police, which are chiefly responsible for past human rights abuses in the country. And as I argued in Jacobin magazine, the British state’s sponsorship of political violence in Colombia appears intimately tied to British Petroleum’s oil interests.

Duncan’s shameful actions, of course, don’t seem shameful to much of the British political elite. UK foreign secretary Jeremy Hunt, for instance, is among Kissinger’s biggest cheerleaders. And Hunt also gave his full backing to the coup attempt in Venezuela.

What an honour to meet Dr Henry Kissinger just now. The world’s most experienced diplomat tutoring the world’s newest. pic.twitter.com/tVzqMWIcTo